Why not using Arabian and Indian？

I agree. It may be impossible to reconcile.

They broke it because teh vast majority of their playerbase is nationalist, and wants divided nations to play with, and not juts broad culture groups like Saracens or Celts.

Most of the civs they are adding to AoE2, right now, are very specific nations. This is what the playerbase wants, THEIR nation, in the game.

“Indians” is too broad a term. There was not anything like a single “Indian” nation or civilization before modern era.
Arabs or saracens, despite having a large unified empire in the middle ages, were still too diverse to be represented by one faction.

yes, but you see there are also diverse periods for china and russia, like Song dynasty and three kingdoms, and kiev rus and Grand Duchy of Moscow, yet they still using Chinese and Russian,
I think they can use specific dynasty or civilization,
but they should use it for all factions, not mixed.

Inconsistency of naming is a different problem here.

Also that might be a problem particular to India. For example, all the Chinese dynasties in the game except Song at least occupied the majority of China at some time period, and they all consider themselves as the legit successors of “China”, or “The Central Kingdom”. However the Delhi Sultanate or any other medieval “Indian” nation did not conquer the majority of present-day India. So there isn’t really a good naming for a medieval “Indian” faction.

Idk how they are naming the “Russian” civilization. If they are called Rus or Slavs they encompass both Novgorod and Kievan Rus. “Russian” might be too modern for the time period.

Three kingdoms is out of the scope of the game. Five dynasties and ten kingdoms did not last long, and was eventually unified again.
I can see your point, but there were unified “Chinese dynasties”, but there wasn’t a unified “Indian dynasty”.

they call it Rus from the spoiled image

“Rus” is at least more relevant than “Russians”. Also, both Novgorod and Kievan Rus were “Rus”, but again there wasn’t a medieval “Indian” nation. 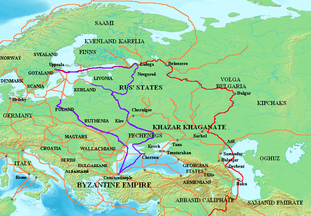 The Rus' people (Old East Slavic: Рѹсь; Modern Belarusian, Russian, Rusyn, and Ukrainian: Русь, romanised: Rus'; Old Norse: Garðar; Greek: Ῥῶς, romanised: Rhos) were an ethnos in early medieval eastern Europe. The scholarly consensus holds that they were originally Norse people, mainly originating from Sweden, settling and ruling along the river-routes between the Baltic and the Black Seas from around the 8th to 11th centuries AD. They formed a state known as Kievan Rus', which was initially a mu...

“Rus” in English mostly refers to the medieval “Rus” people.

I am not sure that is true, but I defer to our Indian friends for help. In my experience designing the Indians for AoEO, which is set around 1500 BCE to 500 CE, I spoke with a number of people who know a lot more about Indian history than me. Overall, I get a very strong sense that people who identify themselves today as Indian trace that connection back through the beginning of time. The present Indian flag includes the Ashoka Chakra, which culturally draws a through line from at least the Mauryan Empire (around 200 BCE) through today.

I’m not Indian so I’ll accept any correction from true Indians.
But Mauryan dynasty was long before the scope of the “middle ages”. In middle ages there was not an “Indian dynasty” that controls the majority of India as the “Chinese dynasties” do in China, so using “Indians” to describe all these medieval nations might be too broad.

Delhi Sultanate is in fact the turkish Muslims that invaded India

Yes, I am aware of this much. I guess I am curious of whether a civ based in southern india during 900 CE to 1500 CE would be properly labeled as “the Indians”

because China uses dynasties as a system, therefore it cant use them as name?

Gosh, that’s yet another good reason to call it the Abbasid Caliphate.

It should be Arabs and Indians. Using individual dynasty’s name is stupid.