Will this game have modern age?

I am really tired playing only medieval civilizations, which looks all same. If this game had progression up to modern ages like in rise of nations, it would be cool. Or at least game mode, which features this besides the classic game…

No my kind of game but… We will see.

let us surprise ourselves. But it will certainly be gigantic

My crossfingers for ancient/medieval setting

I’d personally want them to go back to the ancient times or medieval time or maybe both that you can play with, and add a bunch of interesting civilizations instead of future or modern day age as I’d say there’re more games with that age in today’s gaming than ancient/medieval time.

And also Age of Empire I consider being the best when it’s set in Ancient/Medieval time, and don’t forget that Relic Entertainment also worked on Company of Heroes which is set in WW2, so I doubt they want to compete with their own game franchise as well.

Watching the preview video it basically shows all the ages in AOE 1, 2, & 3 and then it ends by saying “Now a new Age is upon us”, which could be some indication.

It could mean AOE 4 will include these ages only

Hello to all. I’m not sure, but it seems to me that I understood when Shannon spoke, that he said: this is the medieval age and these are the English and Mongolian civilizations. Now I wonder, what did he mean by “THIS IS THE MEDIOEVAL AGE”? … perhaps that the game will include not only the medieval one but also other eras? then, the first video announcement (2017) would make sense …

You will get your answer here.

I don’t want AoE4 be covering just only the medieval era because it would be AoE2 all over. So this trailer is maybe a fake.

Yeah, Adam said he is not revealing too much on where Age IV starts and ends. It will span larger than Age 2. I think original Age teaser would give us the clue now. Interesting.

Quote from video: “Starts a little earlier than what you might expect in Age II and it goes up kind’ve to … the edge of the Renaissance”

So cool! Music to my ears

Personally I do not like WW or WWII era or any kind of modern era. So I just hope for something new on the path of AoE1+AoE2. To be honest I did not liked AoE3. 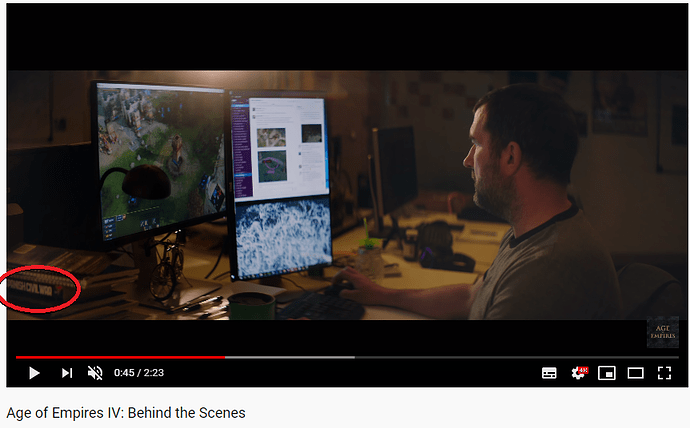 Look in the circle: the name of the book is “spanish civil war”…

well…why spend time in reading historical books, if you are working everyday on a historical videogame? Maybe is not a coincidence

I think in the end it will cover multiple era, not only medieval.
Ah, forgot to say, from this image, it looks like the resources to collect will be the same “food, wood, gold, stone”

nice. I want this to be just like AOE 2 but updated like DE but to the next level

So… I’m a little confused by that video. Searching around I think the PC Gamer article says it is “gameplay” footage… if that is gameplay then holy wow that really looks amazing! I’m skeptical though… I mean it can’t really be that fluid. It looks like a cgi promo. I’ll be watching AOE 4 closely to see if this is real. Archers are on top of walls… not an easy thing to do programmatically. Hmm hmm hmm

Also… I can’t see it going all the way to modern warfare from that far back. Maybe the 1900’s

Look in the circle: the name of the book is “spanish civil war”…

well…why spend time in reading historical books, if you are working everyday on a historical videogame? Maybe is not a coincidence

I think in the end it will cover multiple era, not only medieval.

IGN interview linked below Adam Isgreen clearly says: “slightly larger, starts a little earlier than Age of Empires II did and right to the edge of the Renaissance”.

So no modern stuff. I can’t find the source anymore but I swear someone else claimed they are working on other games beyond Age of Empires 4 and maybe that game will involve the Spanish Civil War and the 20th century.

We can focus on early rush or late game .

Ah, forgot to say, from this image, it looks like the resources to collect will be the same “food, wood, gold, stone”

I think it might be nice to have one or two additional resources to collect, with different ways that the new resources would contribute to tech research and building/unit construction. I don’t know what they would be, but I’ve just been feeling lately (the past year or two) that only having the same four resources to collect each and every game is getting slightly a little old for me.

What additional resources would be relevant to the times? I don’t know. Marble? Silver? Diamonds? No clue.

Considering I’ve also wanted the ability to do late-game stuff to make my city look unique and cool when playing against the AI but can’t (flags, paths, torches, etc.) – leveraging assets that already exist in the game somewhere – additional resources might be usable for stuff like that, too; not exclusively, though.

Maybe the new resources could also be good to be one of the resources needed to construct Wonders.

PS: Giving Wonders some bonus to your civilization (aside from just decoration and points) would be cool, in my opinion. Like faster resource collection, stronger units, etc. – just brainstorming. But I’ve always felt it weird that Wonders don’t really do anything in Conquest games.

I also hope that will be possible to set a starting era and a maximum ending era for skirmishes battles.