Thanks for the help and for downloading!

Here is a video explaining the basics: Here are some pictures explaining the basics:

1. Wonderful Empires Mod is a mod that adds new units (infantry/cavalry/archery/siege) for groups of civilizations as well as new unique units for each civilization respectively:

2. Wonderful Empires mod also introduces some changes to certain buildings and adds some new ones to give a solid defensive gameplay option:

3. Wonderful Empires mod also introduces some economic changes to make the lategame more of an epic fight and less of a cheap units spam:

4. Some issues that comes with this mod:
• Longer Loading time.
• The mod is fairly new and it will need balancing.
• Hotkeys on new units/buildings/techs are a mess for now, they are in the “to do” list.

• The official mod store fails to download the Graphics mod frequently so you should better download the mod from nexusmods, at least for the graphics.
• The mod does not support the enchanted graphics.
• The mod does not contain any new Ai so only player will be able to use the new additions of the mod (If anyone is able to create an Ai for my mod I would be really grateful).
• The mod does not contain any changes to the tech menus, civ descriptions, any new icons or anything like that (Again if any experienced modder on those things feel like helping , I’d be grateful).

7. Disclaimers:
• This is my first mod, I’m a noob and I am not a coder neither a graphics designer/animator. I’ve created this mod purely for fun and to add some variety to the game. I have no other gains from this mod other than the joy of creating it and playing it.
• All the new graphics I used for this mod are scavenged from other mods such as Omkars Historical units mod and Dharma Expansion mod (Both have gorgeous sprites) and I’m very thankful to them for creating those graphics.
If any of the creators wish for me to stop using their graphics I will do so without a second word.
From my search I found they just wish that they are mentioned if any other modder uses their assets but I want to make that clear either way because I admire their work and I respect them.
• Yet again, if any experienced real modder likes Wonderful Empires mod and feels like helping on Ai/Icons/Menus/Tech trees/Civ descriptions/New Sprites/etc for this mod I please you to do so and I would gladly accept all the help possible becauses as fortold I can’t do those and I probably wont be able for a long time.

First of all thank for putting the efford of the mod.
Whit that said i’ve found that some passive bonnus like the teutons armor, malians pierce armor and vietnamese hp does not aply to the modded units.

I see . Thanks for the information alot . I will look into all unique passive abilities of all civs to find solutions. Much appreciated!

In the upcoming update I will be moving all the unit-line upgrades from the barracks/stable/archery to the blacksmith to make some space for more reasonable positions for the training buttons of the new units to kind of reflect their role and make them more simple to access (also to make space for future new units that may be added).

Also i linked most of the new units with already available researches of other unit-line upgrades and some of them got their own upgrade researches aswell (In the future I may change the names of the researches to be more generic so they reflect their actual new purposes).

All those have been tested already vs all the Vanilla Ais and they still upgrade their units normally (thank god haha because I’m trying to understand Ai coding and for now its a hell for me, this will take ages until I understand it. Help!)

And finally I’ve added unique ships for 3 civilization. Pirate ships for Saracens, Dragon Ships for Malay and Canoe for Mayans.

The update is ready and will be uploaded tomorrow.

Version 1.2 have been uploaded with all the changes from the previous announcement!

Version 1.3 have been uploaded!

This update addes some interesting things i tinker a lot with and i made them finally possible!

I’ve added a new system with 3 perks per age , and only one per age is researchable , so chose wiselly

They are a total of 9 perks , each very useful , and with the right civ there are endless possibilities!

Also I’ve added 2 new researches to the mill , basic burchery training and advanced butchery training! Now anything that has to do with collecting food from animals is viable and upgradeable!

And also I’ve added a universal infantry class line , the bandit and the outlaw rogue , this is a unit that while fighting generate gold.

Last but not least I’ve added a univeral mounted villager scout that can be trained in town center , he is able to do the job of a scout while also able to collect wild animals and bring them to the towncenter aswell as kidnap enemy villagers and monks.

There is a possibility that I overloaded the things that can be added to Aoe2de , im not sure , I would have added a second infantry class but the game broke… so it will be long after i add something completly new to the mod until i find a solution to that. Still there are interesting things to come!

Here are some pictures I’ve added to the main description: 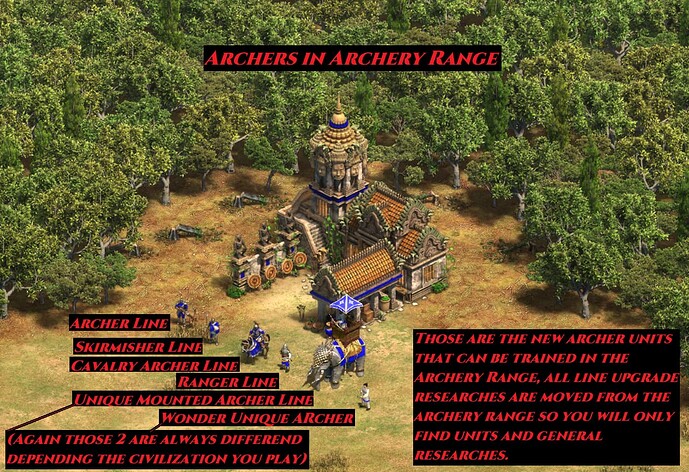 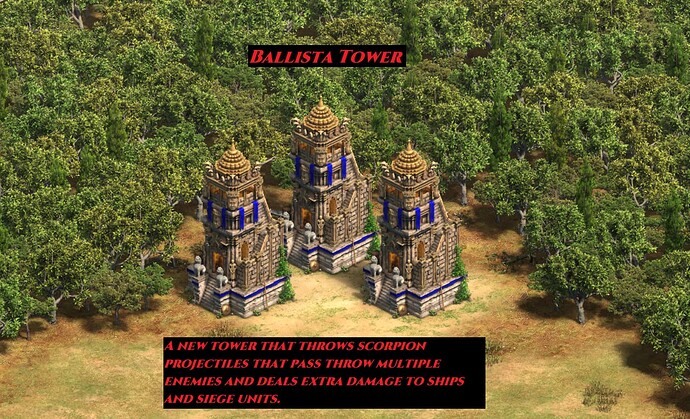 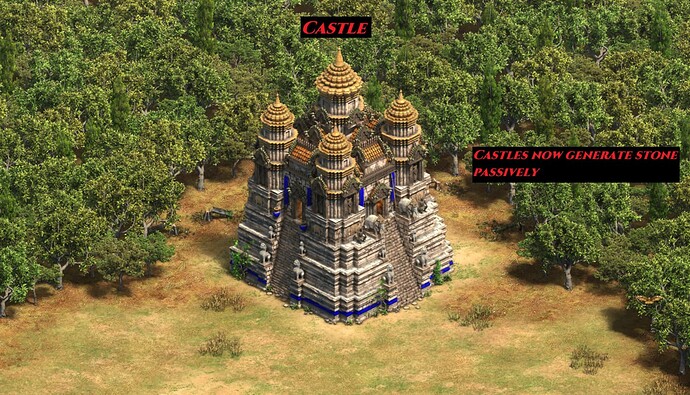 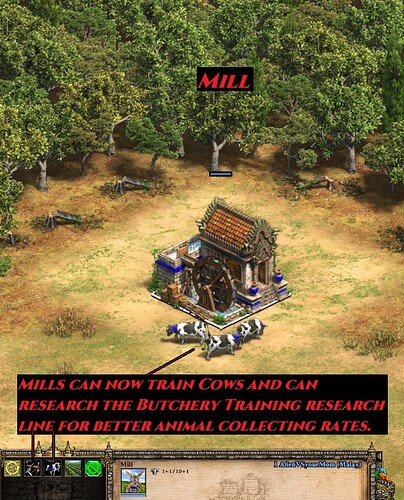 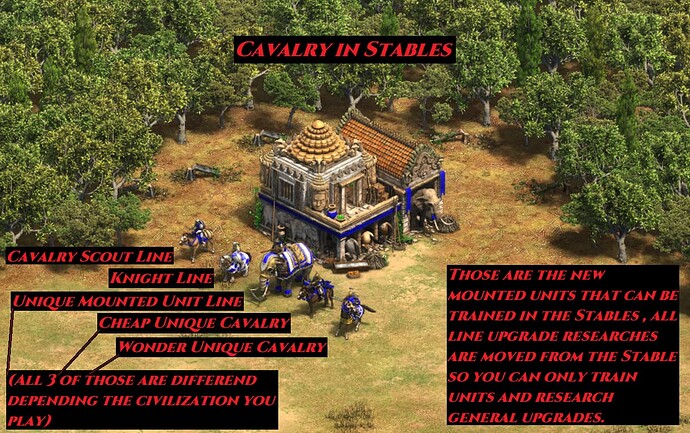 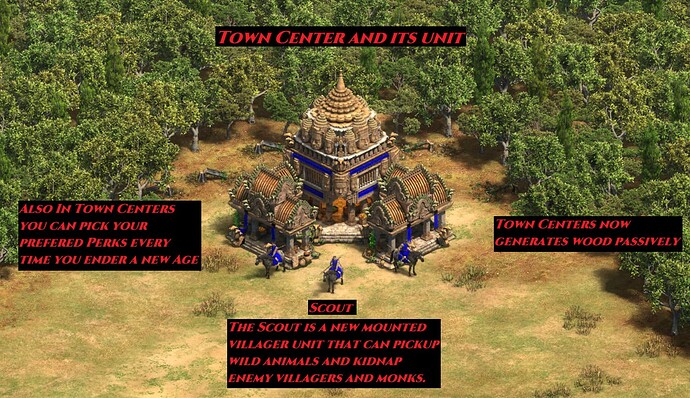 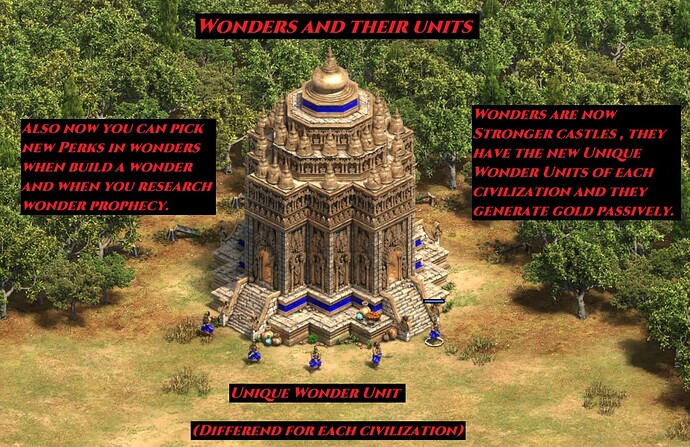 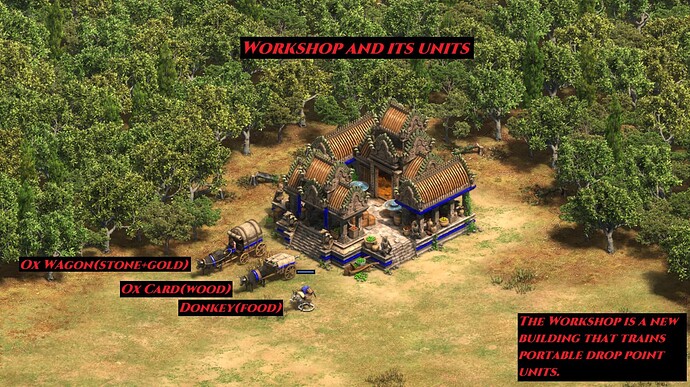 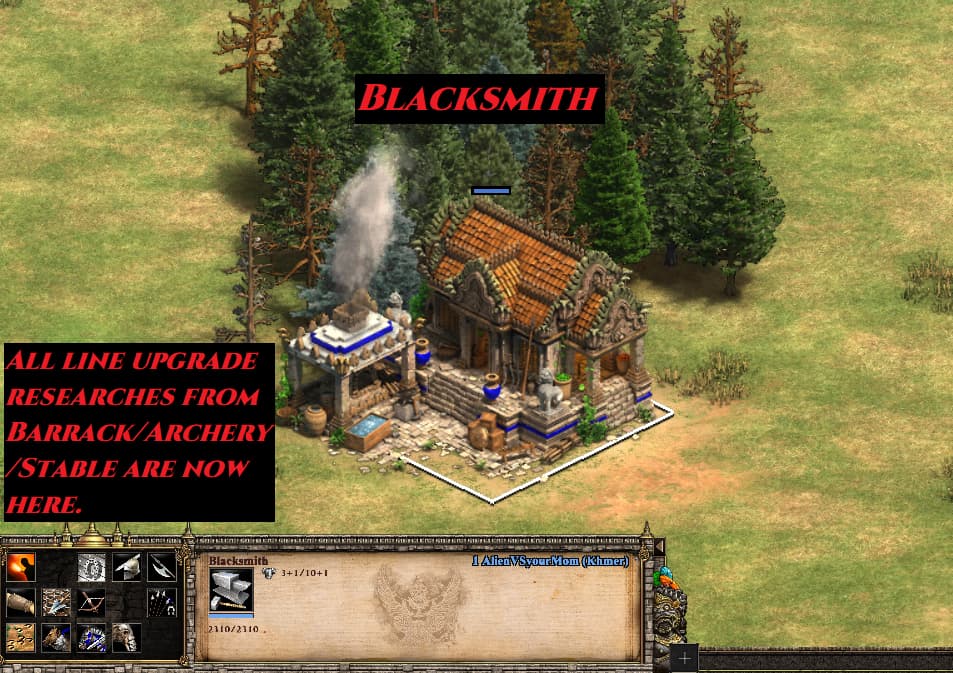 I’ve added new perks in Wonders! You can access the first 3 when you build a wonder and 3 more when you research Wonder Prophecy.

The concept is really unique and amazing… much like age of chivalry mod in AOE 2 , however i think some reskin will be great… I suggest the graphics in this mod by cynderybutton to reskin some new units and also the generic units for different civs. this is a really ambitious mod and you may find some new stuff like siege engines and ships. Omkar also made a reskin mod for buildings but the devs put it down for somereason, hopefully he will put it up again when he gets the time… also the dharma expansion mod is made by omkar himself

Hello StereoQuasar163 , thank you very much for your comment! I will check the mod to see if I can get anything interesting (especially for siege units and ships, those have been hard to find!)

. At first I tried to reskin everything in the game with Omkar skins but it became too chaotic and I left that idea behind , then I’ve created this mod. I believe I will keep the vanilla units as they are to not alienate the mod too much from the vanilla game while also giving the chance for unique skins per civ with the new units so every taste is met.

Edit: I checked the mod but it seems to be missing all its graphics. I found only the Data in its folders.

Indeed it has many intersting graphics! This will be amazing! Thanks for sharing it with me!

I’ve added unique wonder siege units for all civs, team shared units for some civs, Koreans have new castle unit and workshop has new wagon. Also fixed all the hotkeys (i think haha)

I was about to add even more new things that would be ground breaking (like some civ could “arm” their villagers and transform them to infantry/archer units and back again to villagers multiple times, monks would have differend skins per civ , many naval civs would have new ships) but the mods started getting buggy and it would crash too offen even tho i made them work fine so I deleted the additions that was making the mod to crash too offen and kept a more stable version of it. That was a huge disapointment… I will probably only update the mod to the new versions of aoe2de and will do some bug fixs from time to time.

Hi, in my game the description of the units and techs aren’t shown and the poles still dont have wonder tier units. I have the 1.4 version. Ahy idea why does it happends? I dont have mods active besides some oficial effects reeskins

Indeed I forgot to enable Poles wonder unit haha , thanks i fixed that and will upload right now. For the descriptions let me remind you that tech trees are vanila , i did not edit those and wont because its too much to do so. if you mean in the creation descriptions, if you download the full mod from nexusmods and install it manually on local it work fine for me, make sure that mods are activated in the game because sometimes aoe2 deactivate graphic mods and string mods at random after the game updates. It happened to me and was like what happened? and then checked my active mods to find out all mods were deactivated. An other thought is to make sure you dont have 2 copies of the same mods activated.

Your naming/branding needs some work. Don’t just call something “Wonder Cavalry”, it just sounds weird. If you want to do your research, and are going by regional units, you could have had something like the Iron Pagoda cavalry or something instead. Also, if I’m being honest, I’ve never been a fan of any non-official mod that reskins units. We need the devs to do a regional unit thing, because the other ones never look like they fit the style, and it just seems wrong. That’s just me though.

Good points , i don’t have the time to do that now unfortunately, it will happen in a future update probably but it will need much preperation and research , It is as it is now for minimalistic reasons as it helped to manage the mod thus far.
As for reskins , i didn’t reskin much, almost all vanilla units are untouched with the exception of 4 units, while all the other units are new.
Thanks for the comment!

@StormCancer21 , Hello
I would be really happy to see more units from age of empires 1. Although some units have similarities like the pikeman with shield, there are 2 almost same type of skins. Very cool mod! I am waiting for units like board-sword, long-sword, hoplite and phalanx to be added from aoe1

Also would be cool to train wolfs, boars etc.

The mod is discontinued due to lack of time , if anyone is interested in continuing this mod is free to do so as long as he message me here and as long as the original creators of the skins used in the mod are credited. Thanks a lot.