This suggestion was burrried in another thread. So lets being ot back to the surface.

Zhuge nu are a decent feudal age unit however since they are locked behind song dynasty it’s unlikely you’ll be able to field a sizeable mass of them before the enemy hits castle and completely invalidate having this unit ever present.

So i suggested that the veteran upgrade for this unit automatically applies a +3 heavy bonus dmg thereby making zhuge nu a cheap comparable chinese crossbow! This would not resolve the late feudal vs castle units issue BUT it would allow a more seemless transition from feudal to castle via the continuity of this dynasty unit.

7 zhuge nu would do the job of 5 crossbows and still be cheaper than 5 crossbows. Lastly crossbow version of zhuge nu pair better with Imperial handcanoneers for the spirtway healing and attack bonuses!

in the pup tests, the zhuge nu is already better than any archer, the archers only do 1 damage to the siege, instead the zhuge nu 3 (three burst attacks), they are very viable with the low health of the battering ram

Being better than any archer doesn’t mean much if an archer does 1 damage every 1.5 seconds, its just saying that is not the worst, only the second worst.
Zhuge nu is not a bad unit, but its timing contradicts its purpose. One option would be to repurpose them to be anti heavy armor as suggested above or another option is unlocking them from earlier.

Zhuge nu rush is pretty good (not good enough to be the meta) but only if you have enough numbers to compensate for its reduced speed and reduced range. And being trained on Song dynasty mean that not only it is delayed by time but also by the resources invested.

I agree that the unit needs help, but I disagree with the “make it anti-armor” comments I have seen floating around.

As others have pointed out, it totally goes against the historical reality of the unit. And while historical accuracy isn’t the most important thing in a video game, I do think that there must be a better way.

Allow ZN to be able to shoot inaccurate from the center target, through an ability.
This gives them the unique ability when massed, to actually do AOE dmg.
If the AoE dmg is to weak one could tweak the dmg of individual shots to be slightly higher during the ability activation.

I think this would make this unit becoming too OP, and can almost universally deal with almost everything, leading to just spam it brainlessly in any circumstance, I disagree.

But I agree that in the upcoming patch, the buff of horsemen armor might cause trouble, I suggest a unique chinese technology in castle age that increase +1 dmg of ZGN (like the one Mangudai has). This would make it acceptable, but not becoming too op, imo, as u need to research it anyway.

the fastest you can hit song is around 5:10 into game; if you need units to defend your base?? you need something out AT 5 minutes.

If we dont want them to upgrade to be anti heavy units we could remove them from song dynasty. English get a cake and eats it too! China can get zhuge nu unlocked at feudal. This would actually give a viable counter to french since you could ultra mass spears and make a sizeable zhuge blob to counter French archers.

This would actually give a viable counter to french since you could ultra mass spears and make a sizeable zhuge blob to counter French archers.

U can also do that now as well, china can spam ZGN much faster than french spamming archer. I honestly don’t think that china is that weak in feudal like most ppl think. But eventually france will overcome you, if they micro well and keep the knights alive, but it also happens to every other civ as well.

If sth to be done in buffing china, may be some of these (not all) could be, imo, nice

But overall, my opinion is still the same, china ain’t that bad xD, with the new coming patch I also think it should be alright

I honestly don’t think that china is that weak in feudal like most ppl think.

It is not that bad as many people make it seem, but its kinda sad that having interesting unique mechanics they don’t sinergize at all.

I wish Zhuge Nu would be the Tang dynasty unit, if that were the case not only they would come out earlier but you could use the 600 resources you need for dynasty to go all out on feudal. Making them cost 10 more food would make them somewhat on par with longbows.

…why do ppl keep saying its not as bad as ppl make it seem…??? Check the win rate of China at … every ELO, EVERY RANK… EVERY TOURNMENT??? What ■■■■■■■ else do you possibly need to SHOW YOU THAT CHINA IS UNDER POWERED ESP in aggressive feudal matchup on open maps… /sigh

Several decent to high level CHINA MAINS are collectively bitching about the civ lack of power esp in the feudal to castle period. 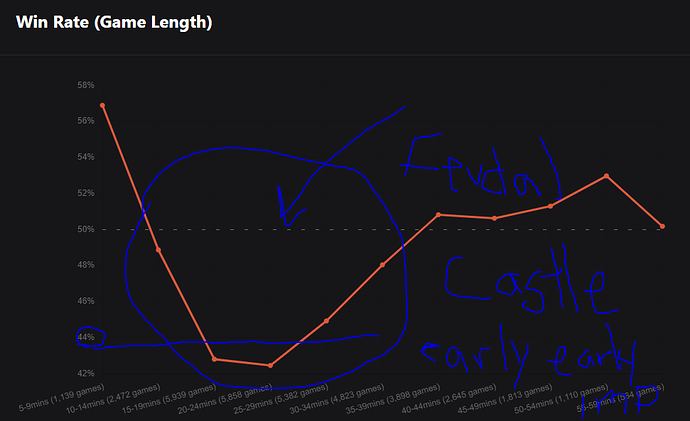 AND after Live patch with the mega nerf on siege coming and the huge nerf to grenadiers, IMO, we can expect the late IMP win rates to take a hit as well.

U can also do that now as well, china can spam ZGN much faster than french spamming archer. I

You can only do this on close maps where you can quel the early raids; on an open map walling cost too much and spears won’t catch knights. BUT if like english China could immediately in feudal start aggressively sending zhuge nu/spears to disturb eco which in itself would help retard raids due to lack of resources. (mind you china can already play this style by BBQ/TR gold…but anyways).

I didn’t know that the Feudal age is from minute 10 to 30 haha. A 44% of victories in certain stages of the game does not seem bad to me, it was worse when there were civis with 30-35% of victories in some stages and 65-70% in others.

China is objectively bad in feudal and not good in general. But numbers between 44-50 means it is not insanely bad to the point of being unplayable. Sadly the constant posts about how to fix china have become angrier and angrier (understandably) because the devs keep nerfing the civ and the general sentiment is that china is a hopeless civ.

Because it really ain’t really that bad, IO supervision & taxes allow china to be economically ahead than most other civs (in feudal), while you can react to whatever army they make really quick, so fighting china in feudal is imo not that easy.

You can only do this on close maps where you can quel the early raids; on an open map walling cost too much and spears won’t catch knights.

Other civs share the same trouble as well when against french knights, but china has a little more advantage in dealing with the raid like BBQ & villages, and the ability to build quickly, and spam spear promptly.

Several decent to high level CHINA MAINS are collectively bitching about the civ lack of power esp in the feudal to castle period.

Everyone is entitled to their own opinion, there are ofc high profile players that complain china is weak?, but also some who think china is very hard to deal with as well, like Don artie and Fitzbro.

When you put other civs into perspective, chinese doesn’t look that bad at all during feudal, much better than the abbasids in feudal.

I’m happy you included all the win rates; yes Abbasid is in a worse situation earlier, but not for longer than China. Yet the Dev’s took notice of Abbasid lack of feudal prowess so they buffed Golden age 1 by 5% hoping this might help this issue plus additional Abbasid buffs. Meanwhile China got a ton of late game nerfs (I agree on the ideas of the nerfs, idk about the level of the nerfs?), but only got 1 early game buff, Imperial Academy can now produce IO! Personally I do think the IA change will be impactful, but only time will tell if it’s enough?

The Abbasids need a Feudal age up alternative to the economic one. So, they could improve something. I think that the percentages are very good in general for the balance, some things need to be tweaked to offer more variety.