Zoom topic shows how disrespectful the devs are

After open beta, many players, including me, have asked to allow the further zoom level, so they can really choose how they want to play the game. Personally, I wanted to fluently switch between zoom levels, depending on the situation. For example when microing archers and mangonels I’d like to be zoomed in, but when I build walls or assess the map features after scouting, I’d rather zoom out further to be able to perceive more at once.

In the current state, as Aussie_Drongo pointed out, nothing was done to zoom level besides adjustment to camera depending on the terrain you are hovering over. The response to the honest feedback is “you can’t play game like this”, there is no discussion, you cannot choose how you want to play the game and adjust zoom yourself, it’s set in stone because, probably because one guy decided that. That’s just insulting to me as a player that has played RTS games for 20 years, that I cannot myself choose such a basic feature.

It’s such a contradiction to the attitude presented when AoE2 DE was coming out. One of the first games before the release I watched was Tatoh vs other player, maybe Daut. One of the things that casters have noted, was the fact that both players played on different zoom levels. There was no “best option”. Now, after the release of AoE2 you can see most players play somewhere in between the extrema, depending on their taste.

Now go look at the AoE4 streams. Everyone is zoomed out to the maximum. Lower than that the game becomes unplayable. There is no room for adjustments and personal differences, you cannot check if the default max zoom is really the sweet spot for you, because you have no option to zoom out further to compare. It’s just bad treatment to the customers.

I can explain like 95% of choices devs made in the game. I can explain why they chose graphic design as is, why tech and troop icons are hard to distinct, the fact that some civs seem bland compared to others, or why the water isn’t as dynamic as you would expect. I accept all those design choices that had to be made as they are. Fully. But this one I cannot pass. There is no reason I should be treated as someone incapable of adjusting the zoom to play efficiently, and I do not agree to be treated as such. I just canceled my pre order and I hope they will find reason after the release, because I have no hope they will before one.

After the stress test, a lot of people came to peace with the thought that nothing will fundamentally change and ‘take it or leave it’ is probably a healthier way forward.

I’ve written about zoom so much I’m completely burned out.
With today’s tech, computing power, how lightweight AoE IV is it’s just mindboggling. It’s not a deal-breaker, I had loads of fun in the beta, it’s just a symbol of some things that are troubling the game, devs and everything in between. More disheartening than anything else, especially considering how small (that doesn’t mean incosequential- performance, game balance etc.) element camera zoom is. Bigger issues were frequently talked about and it’s not like these concerns have been put to rest.

Meanwhile other devs are tweaking their old ■■■ engines to get zoom like that: 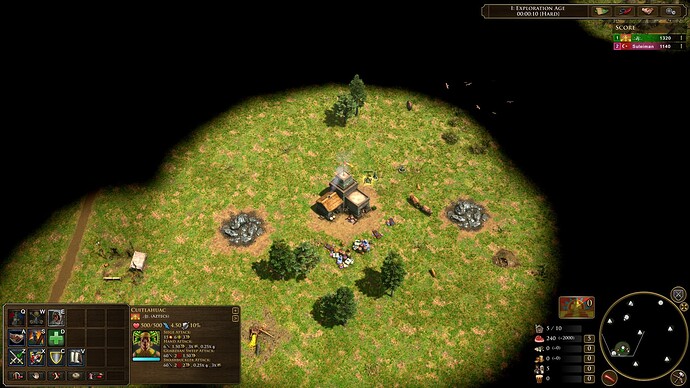 Unless we’re talking about highly immersive, usually mostly single-player, super tactical games that look mindblowing - I don’t need to shove my nose into the armpits of troops under my command.

Actualy, they just put in aoe4 game every game breaking feature and call it a masterpieace.

I mean what do we, the peasent players, know about the game we want to play. The devs surely know better than us the product we want.