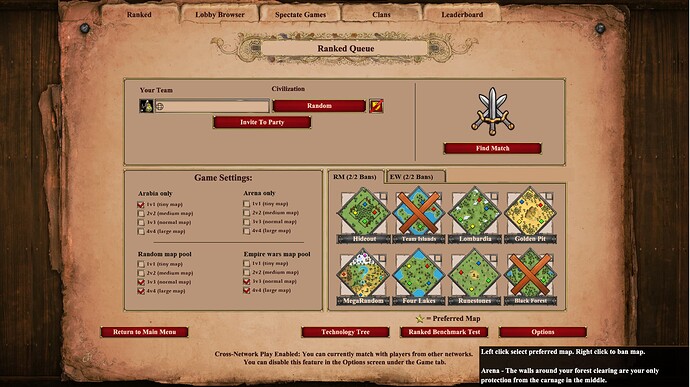 Better ranked lobby1920×1079 233 KB
I think a lobby that looked like this would resolve many of the issues we have with Alt-f4. Maybe it’s not perfect but it’s a simple change. Frankly it’s negligent the devs haven’t done something for this yet. Punishing Alt-F4 is fine but it’s a treating the symptoms and not a cure for the real issue.

Edit:
This would essentially work like the matchmaking does now but would allow players to play only Arabia or only Arena. I find these are the most beloved and contentious maps. Meaning Arabia folk are often opposed to Arena and vis versa.

I think matchmaking would be the same or faster at certain ELOs. At lower ELOs I believe matchmaking would be much faster than it is today especially if you have Arena selected. If you browse the custom games in the lobby you will see a lot of Arena noob and a fair amount of Arabia noob games. With this system all of those noob games could moved to the ranked lobby. This would really help the lower ELO players get good matches. I occasionally try to play some Arena in the lobby browser and it’s really uncommon to get close games.

If you like the current system and enjoy playing any open map on 1v1 you would simply select 1v1 Arabia and 1v1 map pool. Then you could ban hideout, amazon tunnel, black forest, islands, etc. in the rotating map pool. Essentially like you do today. This would also mean the open map fans don’t need to waste a ban on Arena.

This isn’t a perfect solution for the Black forest or Nomad hardcores but it would get them closer to getting those maps.

neat, i like it. would this mean creating a seperate ranked system for arena and arabia 1v1s and team games? if so that would make the elo list twise as long and would need a bit of a reworking of profiles.

I had imagined the elo system would stay as it is. With some improvements to the team game ratings but that’s a separate issue.

This is actually a decent idea. It looks quite good to me. Maybe make a list of your changes, or annotate the picture though, because it took a while to work everything out. Elo would possibly need a rework, but I think it could be fine as it is.

i think an even simpler solution is just give infinite map bans.

It’s simpler to just throw out that idea but it’s not simpler to build. It would completely overhaul how matchmaking works. How it works now is it finds a comparable player/team then it determines which map you will play. Infinite bans would need to find players who have similar maps available then it would need to match on skill. It’s a large change.

Also I’m not convinced infinite bans would give players better experiences than what I’ve proposed here. Mostly people are picky about Arabia or Arena.

okay that makes sense. in that case yea your idea seems like the best i have ever heard

The problem with this solution is that it requires Microsoft to hire a dev and implement a proper matchmaking, instead, it is much less costly for them to ignore the problem and ban their own playerbase.

You still need to have some sort of system in place against alt-f4ing itself, because now that so many people do it and some quite often, I think it will just continue in the random map pool.

But apart from that I like this scheme, except that it will lead to distorted elo, since arena only players and arabia only players often have inflated elo due to their skill on a particular map which is immediately nerfed if they play the rest of the map pool (say, in a tournament)

It would make that inflation permanent however, and we have to consider if that’s the way we want elo system to develop toward instead of coming up with another solution

seems like that is biting off more then they can chew. i think focusing on one issue at a time is more important. prioritze stoping players from being annoyed by altf4 over elo inflation. team games have absolutly massive team game inflation and yet it is still more popular then 1v1s.

It won’t matter though I don’t think, because the elo will then reflect peoples skill in their chosen map, and if they play tournaments, they will probably play more than just one map anyway. I think that this is a good solution to some of the problems. It also looks nice in my opinion.

I cannot speak for teamgames, but for 1v1 this idea will worsen the situation for people who like maps other than Arabia and Arena (e.g. water or hybrid maps) a lot: Long queue times/uneven matchups, and on top of that still no guarantee to get a “nice” map (according to personal taste).
As a consequence, the “random map” queue will just quickly die.

I’m not sure. Those players could skip the Arabia and Arena queue and just check the 1v1 RM and nothing else. Then they’d be matched with anyone who also has 1v1 RM checked.

People who likes other map than arabia DESERVES longer waiting times, whats is wrong with you people who have fetishes and want to find a game like if ur tastes would be shared among the rest.

Arabia has even with current map ban system the 75% play rate of all maps, the rest of the maps are below 4% of the preferences, match making should be around the majority of players preferences rather than empowering minorities, cause that is what actually caused the big issue, nomad players only want to play nomad, they ban arabia and alt f4 any other map, the same happens with other small map players, they are actually denying the most played map to anyone they get on the MM.

There are several ways to improve the MM, but the devs don’t have the will to do so, for them seems easier to punish and motivate their players to leave, rather than accept failure and redesign the MM.

I wouldn’t say people deserve longer wait times because they have other preferences. But this is the internet and people will be rude.

The point is this tool gives players the option to play how they prefer for a vast majority of players. If the wait time is longer for less popular queues that’s normal.

People who surrender early are a problem

This topic shows the worst of some people, lack of empathy and common sense,

People who likes other map than arabia DESERVES longer waiting times, whats is wrong with you people who have fetishes

Try having some empathy here. Everyone wants to play a game they like, no body wants the AltF4 to be rampant.

Empathy doesn’t apply to a guy complaining for longer queue times if they allow players to play what they want cause that is something on demand for most people, “everyone wants to play a game they like”, that is actually the point, in current system if you like to play 4 lakes then you just have to ban arabia/arena the goldrush variation and favorite the water map, as result you will get your map 90% of the times, once people know how to abuse this system, they get their maps despite having really low popularity.

Anyone with common sense wouldn’t complain if he had to wait longer to get what he wants, problem is that the small minorities now have got used to get their maps played by forcing others to play they less desired map, current system motivates the altf4 in essence, that is why everything needs to be changed not enforcing it no matter what.