A few ways to improve the scenario editor

Hey there! I have been designing scenarios for AoE2 since basically forever. It is by far my favourite part of this game and what has kept me coming back to it year after year. Designing new worlds, telling new stories and sharing these with a community of like-minded people is, at least for me, the core AoE experience - even more so than the multiplayer!

The AoE2 scenario editor has always been an easy to learn, versatile tool and I often find myself coming back to it when a story pops into my head that does not work in any other medium. A few of my projects have gained some attention, and my scenarios combined have garnered somewhere around 100 000 downloads, on Steam and Age of Kings Heaven combined. Even now when I am working full time and juggling other obligations, I intend to keep making scenarios for AoE2 whenever I can.

The new additions to the editor in AoE2:DE have me very excited. The new effects, the addition of AI variables into the triggers, the copy button for triggers and effects (finally!), light settings and much more - all of these additions I absolutely love.

Even so, I am unsure whether I will switch over to DE from the UserPatch for my future projects. There are a lot of bugs left to iron out that are blatantly visible in the DE editor, as well as lag and response issues - and the UserPatch still has some features that the DE editor doesn’t have.

I want AoE2:DE to be a success, because this game has always been very close to my heart. Therefor I have compiled a list below of issues discovered by myself and a couple fellow designers. Below that, I have also included a list of suggestions on how to improve the scenario editor and make it definitively better than the current UserPatch.

(This is not an exhaustive list and I intend to keep adding to it as I explore the editor further.)

Bugs and other issues: 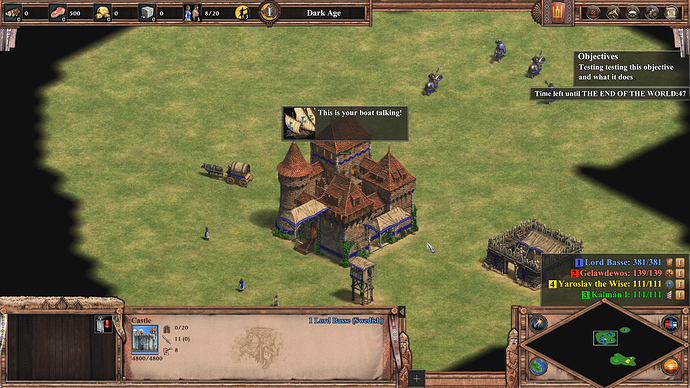 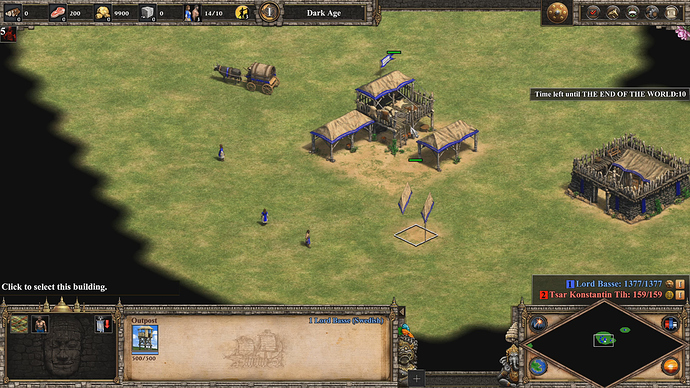 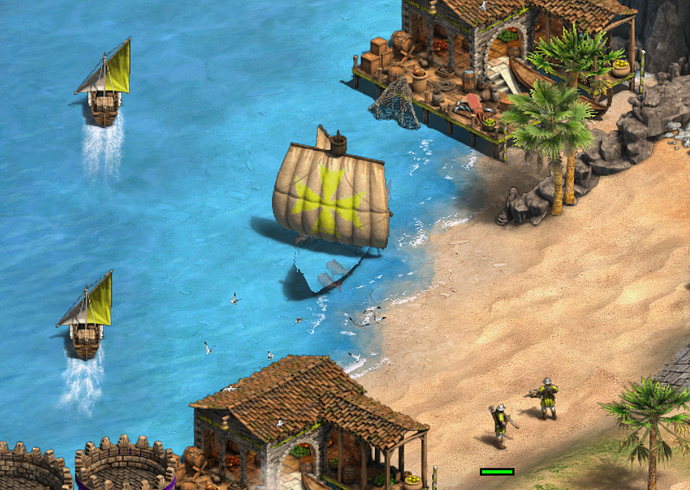 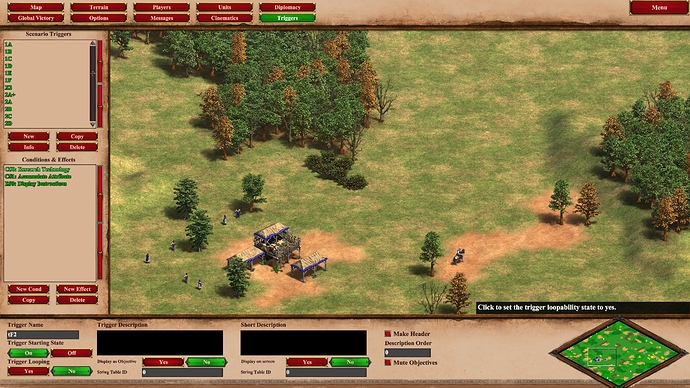 Response delay in the “Triggers” tab. For reference, this is a 240x240 (giant) map with approximately 1000 triggers, but the delay starts being an issue even on very simple maps when there are triggers with many effects in them.

Suggestions for further additions and tweaks:

That’s all for now. More will be added as I keep exploring the editor!

Great points. A couple things that I would like to add if you don’t mind.

These would both be great additions! I will add them to the OP.

A few more additions after some further testing:

Great list so far, very good points. I find it quiet disheartening, that the editor seemingly wasn’t tested enough. I wanted to start getting into scenario designing with the launch of DE.

One little thing I can add: 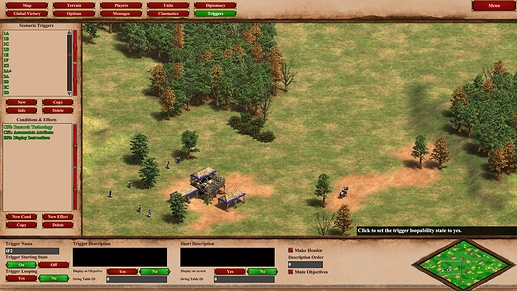 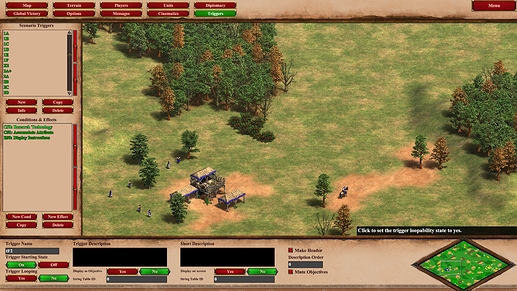 Oh and regarding this:

There REALLY should be a drop-down menu for all the available sounds for the “Play sound” and “Display instructions” effects, as in the original game. You could even improve on the original editor by adding a search bar to these effects, so that you can search for the specific sound you are looking for/narrow the list down to only the sounds with a common prefix (which is a very comming way designers use to categorize the sounds for their specific scenario.)

Did you manage to let a soundfile play in game (either one of the existing ones or a new one) and if so, could you tell me how? Typing in the file names doesn’t work. What another user suggested in this thread also doesn’t work.

Yeah, I was really hoping to be able to start designing something with the new editor, or at least port some of my older maps to the new game version. With the current state of things, though, I think I will wait until it’s been fixed.

I did manage to get one sound to work, I just typed in “s1a” (one of the sounds for the Saladin campaign) and it worked. When I looked at the effect after testing, it had changed to something like “Play_sound_s1a”… it seems to have done that automatically.

Oh wow, that’s interesting, so u have to input the old file name. I think the new soundfiles located in AoE2DE/wwise are somehow linked to the names of the old soundfiles. Figuring out how it’s done, is the next step. Then i could get custom soundfiles to play in scenarios :D.

I’m literally trying to get custom sound files to work right now aswell since a few hours back, asked for help on the AoE discord but didn’t get much help there.

I took a look at the E3 scenario and seeing how they played sound files in the dialogue messages there, they’re written as things like “Play_E3_17”, “Play_E3_12”, “PLAY_WONDER_DESTROYED” etc, which I assume are Sound Events - but I have no clue where these sound events are even defined…

And if they’re all defined in one single file this would be really bad if it’s the only way to do custom sound files, as every custom scenario would need to provide their own file with modified sound event lines, meaning you’d need to exit the game after finishing every scenario with custom sounds and replace the sound events file with the next scenario’s file that you want to play

Really counter intuitive and counter productive for scenario makers in general, I dunno who thought this change was a good idea, ESPECIALLY when they don’t even provide any sign of actual documentation or information on how to use this ■■■■ feature.

I even tried chucking the sound files like the good old way into the “sounds/scenario” folder and putting in the full file path to the sound files among a bunch of similar ways, none of them works which is really disappointing.
One of the bigger reasons I bought this is because of the scenario editor improvements, and finding out that using custom sound files to create immersive scenarios is this complicated REALLY puts me off

Nice, you had the exact same line of thought as I had. Including this:

I even tried chucking the sound files like the good old way into the “sounds/scenario” folder and putting in the full file path to the sound files among a bunch of similar ways, none of them works which is really disappointing.

Keep us updated, if you find the file(s) which define the sound events!

Custom wem files do not need the “Play_” prefix.
If correctly converted from wav, you just need to type the file name into the respective text field.
Please note that this currently only works for Display Instructions, Play Sound is currently not working, except for some generic sounds we added. Feel free to use them in your works:

But into which directory do converted .wem files go?

I’ve gone through the WWise quick guide to working with events in the program and added a Play event to a single imported sound file that I converted to .wem, that I then tried placing into any of those above directories to no effect, I also tried to convert an imported .wav file into a .wem file without adding any events to it, also to the same lack of results

But into which directory do converted .wem files go?

You have to store them in
\resources_common\drs\sounds

Doesn’t appear to work unfortunately, .wav file was converted to .wem with the Vorbis high quality project settings and everything as per the video below, .wem file was renamed to custom_sound_test.wem after conversion and placed into “resources/_common/drs/sounds”, in a scenario I’ve triggered a Display Instructions and typed “custom_sound_test” into the sound file field

Is it possible that it only works properly if you place it into a local mod folder that the scenario will also eventually be placed in?
For quickness and ease of testing I’ve just been attempting to place it straight into the game a la the olden days of putting sound files into the sound folders

Edit: I can confirm you do indeed need to put your sound files into a local mod and they’ll work no problem, finally managed to figure it out.

For anyone else wondering, use the guide in the video in this post to convert .wav files to .wem, then place the .wem file in a new folder withiin your local mods folder, while maintaining the folder structures BassiAoC described

In the scenario editor, input the name of your .wem sound file into the Sound (Event) Name field, without adding the file extension or anything else to it, for example if you named your .wem “soundfile.wem” you would just type soundfile in the trigger effect

Looking at the way WWise works, it looks like you may ultimately be able to contain multiple sounds in a single .wem file and use WWise Play events to define how to play each sound separately when needed

I am having trouble adding in sound files as well. I downloaded WWise and followed the tutorial and got a .wem file that I placed in a newly created drs/sounds folder, but I just could not get it to play. I tried renaming the folder (sound/sounds), tried renaming the sound event name (Filename, Play_Filename, etc.), tried moving the file to the mod folder for the scenario and back to the original folder. Nothing seems to work.

The thing is, though… even if I do get it to work, the change from the old sound file system to this, where you are dependent on a single, complicated sound studio to get functional files, is not exactly making things more user friendly. Is there really no way to just allow designers to use .mp3 and .wav as before?

Check my post above, I just now edited it and added the final solution I discovered to the bottom of it so I may have been doing that as you were typing your post

I agree that there should be a more user friendly and quicker way to do this than to have to use a third party tool, both options would be nice to have considered in the scenario editor design - backwards compatibility for simply inputting raw .mp3 or .wav files to maintain old scenarios while still being able to use the more modern WWise method of storing multiple sound files in a single container

Yeah, the thing you describe is exactly what I tried one of those times, and it didn’t work. I tried it again just now, and it still doesn’t work. I have no idea what I am doing wrong haha!

EDIT - I added a video to the OT showing exactly what the response delay for triggers looks like.

Totally agree with finishing descriptions… I’d also say, fix the tooltips and make them more informative, the trigger tooltips don’t help much at all in understanding their use… A full list of triggers and all their effects would be useful.

The thing is you can change the ID, in which the name and description is pulled from in String Table, alot of it is nosense wave 1, jumble text and etc, so being able to change the string table, would solve a lot of stuff using existing triggers and not needing to add a lot, but both ways are good, compared to looping a trigger, and the trigger wont hide the fact that during training you will read the original name, since thats not affected.