Sound Effect in the Editor (Trigger)

I tried getting an old scenario to work, which had custom recorded voice lines in it. Since the game doesn’t seem use mp3 files anymore, it’s probably not as easy to select the sound file in the editor. It used to be done through a dropdown menu, now its asking for an event name as seen in the following screenshot. 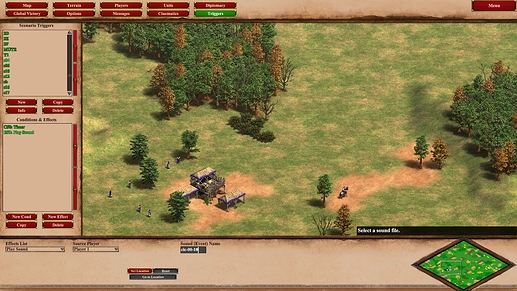 Does anybody, who is more knowledgable about this kind of stuff, know what you need to do now in order to add custom sounds/any sound to a scenario?

The file needs to be .wem which can be done through the software wwise. wwise can not convert from .mp3 though, needs to be a .wav first.

The file needs to be .wem which can be done through the software wwise. wwise can not convert from .mp3 though, needs to be a .wav first.

Yeah I got this far too, but I couldn’t get a sound to play, not even the ones from the game.

I suspect the sound effects might be mapped to an event somehow and you have to enter the event name. That’s probably why the game is asking for the sound (event) name.
Typing in the the filename you’d want to play doesn’t work.

I was able to play existing files by putting in “Play_” then an existing file name like “Play_327948”. But none since.

Tried this out now, but typing that in doesnt do anything for me :o.

Wanna know how to solve this problem, too.

You have to store them in \resources_common\drs\sounds

Check out this post! Vastiny found a way, that worked for me as well, after some fiddling around.
The Play Sound function is currently broken btw. Redoing all of it in the scenario I wanted to, takes a ton of time.