“Warchiefs of the Andes” 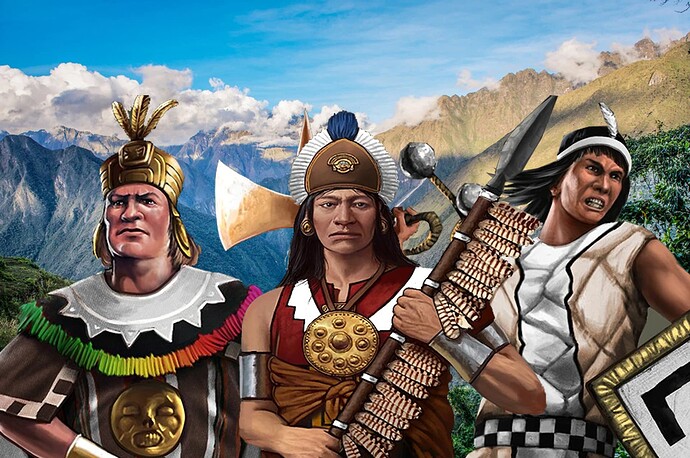 A new DLC for AoE 2 - DE, featuring three new civilizations from South America, the rework for the incans with also new campaigns and maps.

The Wari Empire or Huari Empire was a political formation that emerged around 600 AD in Peru 's Ayachuco Basin and grew to cover much of coastal and highland Peru. The empire lasted for about 500 years, until 1100 AD. It existed during the same era as the Tiwanaku culture, and at one time, was thought to have been derived from it.

Multipurpose infantry unit. It could have two options for battle: spearman and skirmisher, depending of the enemy distance.

Highly resistant Waru settlement that can increase the defense of nearby buildings by X%. Building it costs gold and stone. Available from the Castle age. On Imperial Age, it can train Amazon Archer, an archer unit available after converting an enemy archery range that can build pailings. A male version of the scenario female unit of the same name, first featured in El Dorado Campaign. It could be different from his female version due his bronce ornaments.

Tiwanaku, Gate of the Sun

The Muisca (also called Chibcha) are an indigenous people and culture of the Altiplano Cundiboyacense, Colombia, that formed the Muisca Confederation before the Spanish conquest. The people spoke Muysccubun, a language of the Chibchan language family, also called Muysca and Mosca. They were encountered by conquistadors ordered by the Spanish Empire in 1537 at the time of the conquest.

A slinger unit with bonus against siege units. It could be different from the Slinger and Elite Slinger thanks to it poncho.

A quick infantry unit available after converting an enemy barrack. A male version of the scenario female unit of the same name, first featured in El Dorado Campaign. It could be different from his female version due his bronce ornaments.

Chimor (also Kingdom of Chimor or Chimú Empire) was the political grouping of the Chimú culture. The culture arose about 900 AD, succeeding the Moche culture, and was later conquered by the Inca emperor Topa Inca Yupanqui around 1470, fifty years before the arrival of the Spanish in the region. Chimor (Spanish pronunciation: [tʃi’mu]) was the largest kingdom in the Late Intermediate Period, encompassing 1,000 kilometres (620 mi) of coastline.

A infantry unit armed with a bronce head club, with a defense bonus and attack against defensive buildings like castles and towers. It sprite could be based in the Maceman from Age of Empires III.

Multipropose ship available from Feudal Age that can fish and attack with a bonus against gunpowder warships. It requires to gather up to two units (excepting monks, heroes, cavalry or siege units) to attack. Canoes can’t set fishing traps thoug or can be affected by Transport Ship upgrades.

Two main battles, one between the northern and southern Muisca and one with the southern neighbours, the Sutagao, have been described by the chroniclers, mainly De Piedrahita. The first battle was around the year 1470 in Pasca between the zipa of Bacatá Saguamanchica, leading an army of around 30,000 guecha warriors, and the cacique of the Sutagao, resulting in a victory of the first and the inclusion of the southern region into the Muisca Confederation

The El Dorado campaign in Age of Empires II HD: The Forgotten is depicting the quest of Francisco de Orellana in search of a rumored golden city known as “El Dorado”, the namesake of this campaign. The player is playing as Spanish for the first scenario, and play as Incas for the other three.

A remake of El Dorado campaign can be maded for this pack, using the Andean Civilization to reprise the non-incan factions in the scenarios.

El Dorado should actually be renamed to Cotton Armor, which is historically a lot better, and really fits with the effect.

Absolutely useless. Minor savings on supplies, squires, and the upgrade techs. There are already much better versions. Even if extended to blacksmith upgrades, it’s still useless.

Lumberjacks generate 5 gold per second while in gathering animation.

Really OP, strange how it is linked to that part of the animation, and steps on the toes of the new Vietnamese UT, which actually costs resources.

Not really that helpful, melee armor doesn’t really benefit skirms, because they die if something comes into minimum range anyway.

A quick infantry unit available after converting an enemy barrack. A male version of the scenario female unit of the same name, first featured in El Dorado Campaign. It could be different from his female version due his bronce ornaments.

You don’t really convert barracks, so this unit will never be seen.

This is way stronger than the Incan bonus, purely because it affects the entire team. Way too strong. Also, imagine this stacked with Frank castle bonus, it’s totally broken.

That steps on the Teuton bonus, and is useless unless you want them to be a tower rushing civ.

This is an AoE4 ability, and it’s probably either useless, or too strong.

You already suggested this.

What? Where will they research it, and why. It’s a pointless bonus, that will just either be unused, or promote tower/castle rushing. Just bad.

Be free to suggest changes, I’ll take all your feedback as a positive point to balance civs

I think its “Andean” in English

Tbh Im not a fan of having eagle warriors for all American civs, but dividing it would be a weird choice. Also, isnt there a better name than Condor warrior? Maybe something like the Chasqui? or Runancha?

Also balancing a ranged scout may though

Those bonuses overlap with the next DLC, and the first one is very very weak.

I think a simpler name may help, but its okay, not sure how easy to balance will it be tbh

Seems pretty meh with it affecting only one unit. Maybe it could affect spearmen

Muiscas could recover a percentage of the stone when a castle, tower or wall is destroyed by the enemy.

Very weak for a UT

Its not OP, but it overlaps with Teutons

Mmmmm I guess this could be interesting?

Seems okay, but not the most interesting unit

Not a fan tbh. Too weird

Eh not sure how I feel about this

Dont the Waris also have this?

GIve me a sec and I will propose some changes

Tbh something I struggle to see is how these civs would deal with siege. Would the Condor Warriors be good at sniping siege?

Tbh you may have wanted something a bit more vague, but you have my designs to use if you like them

What about the new incans? Do you agree with the shared slinger between the new civs and the exclusive elite slinger upgrade for incans?

And what about Illapa Warrior, the bolas anti cavalry cavalry version of the Xolotl Warrior?

What about the new incans? Do you agree with the shared slinger between the new civs and the exclusive elite slinger upgrade for incans?

Biggest problem may be that these civs end up hardcountering eagle warrios, but its fine in theory

And what about Illapa Warrior, the bolas anti cavalry cavalry version of the Xolotl Warrior?

But a fun idea either way

Other possible conception of new American DLC is:

Age of Empires II Definitive Edition - Warchiefs of the Americas

we already have 3 new world civs and its borderline fantasy, i know its a game but there are real medieval civs that are not represented like west asia.
caucasus region had medieval warfare,
middle east too

i think we dont really need more civs but to polish the existing ones but southamerican societies where literally stoneage, no reason to include it more into a medieval warfare rts

Well, Wari were conquered by the Incans, so yes, it can be a good choice for replace.

Also, if African Kingdoms introduced the portuguese, why not an central america civ ourtside the andes mountains but from the americas as well?

Can you provide a small concept about the Tarascans?

I think we have enough candidates in South and Central America to get a different dlc for each of those regions, don’t we?

Slinger: a former second unique units of the Incans, it could be available on the Archery Range for all the andinean civilizations.

Really could be a common unit for most ingame civs. Could ignore armor as its bonus, as you got hit bad whether in armor or not, unlike arrows

I really don’t understand the obsession that some have with including these stone age cultures, is it the current trend towards everything that is politically correct? where we are all included without exceptions? I am from Argentina but I would never ask for the inclusion of the Mapuches for example. I am clear that AOE2 is not exactly an extremely historically rigorous game, but don’t you realize how anachronistic these speculations are?

Even among the people pushing for more South American cultures, many don’t want Mapuche because they are deemed too primitive even compared to the civilisations proposed here. I have to admit I know next to nothing about them, but it seems the Andean and Mesoamerican cultures discussed here are far different. Many of them had agriculture, fortifications, a writing system and sometimes even mastered metallurgy and/or sailing before or during the Middle Ages, so caling them Stone Age cultures is quite inexact. You could argue that they were closer to Bronze/Iron Ages cultures than Medieval ones, but since they existed at the same time as Medieval or Early Modern Era European cultures they fit AoE2’s timeframes more than AoE1’s.

These guys arent stone age cultures. They had states, metallurgy and kings

Tbh I think Mapuche could be added since they have campaign potential, but they arent necessary (and tbh neither are most American civs, but thats not what we are talking about)

The norse were still in the bronze age in the 6th century, and you call stone age savages to people who were ahead in the late bronze age at that time…
Not to mention moche (aka chimu 1.0), indians, and the chinese were the only ones in the world who could produce bronze alloys harder than 273 vickers before the industrial revolution.

I feel the same should be true for the camels that roam the Arabia maps. Not that I know whether or not there’s a culture that eats a lot of camel meat, but camels being huntable would give them more purpose than just being decorations.

Yeah, I remember reading about camel meat being consumed in the Arabic peninsula and imported from Australia because Australian camels carry less diseases.