Is anyone else having the AI Team keep resigning when playing deathmatch. I’ve had them resign 4 times without a single battle. Have had it set to both conquest and last man standing and doesnt make any difference.

I hope this isn’t the same bug from beta. If your score is much higher than the AI’s they’ll simply resign. This was a big problem in the beta where people just wanted an easy game but the AI would resign before any battles took place

Hello, are you playing against Standard AI or a different difficulty?

Same problem here - resigning without even one man down. That really s…
Using standard AI.
Will test others - but that should never matter - sometimes I dont have time to fight the hardest one, so I set difficulty to standard. I usually play hardest - gonna do so now - let’s see what happens.

When I played with friends against Hard AI (just AI, not HD), they still resign even when you use the command “Do not resign”.

Thank you for the feedback, we are looking into it.

For the AI command did you make sure that you were sending it to enemies too (you can check in the extended chat window with the AI command list)? By default it may not do that in teamgames.

Im not sure I sent it to the enemies, I clicked on “Command AI” tab and then “104. Do not resign”.
And the enemies resigned shortly after that.

Same issue here. AI gives up the match early in the game. It happened at 5 mins, 15 mins and 20 mins. I always played Standard difficulty. At the scoreboard, enemy was only behind by just a few hundred or even less points. I have MS version: 101.101.32708.0.0. 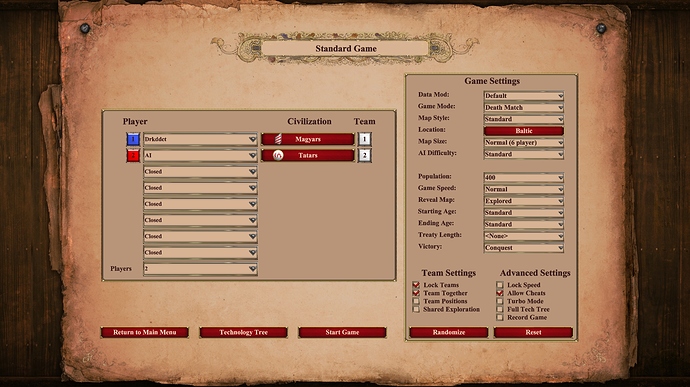 I tried this where the AI Author gave answers:
Steam Forum

I directly sent the AI (by having a tick in the box and write in the bigger chat window) the “Dont dare to resign” taunt yet this fokker gave up. I’m losing my hope.

this works perfectly in AOEIIDE release: “Command AI” tab and then “104. Do not resign”

I can now confirm that this Taunt works (at least) in Last Man Standing mode.

Is anyone still seeing this issue?

Maybe a fix to this is require AI’s to have lost a certain number of structures before resigning?

If you get an archer out fast enough against an extreme ai (in standard game) it’ll just resign, basically because a single archer will just cause the ai to idle all its villagers and eventually resign due to score difference. This even happens if it still has untouched allies which I really don’t understand

Also I don’t even know if opponent taunts work in aoe2de. I think the only one where you actually get some sort of response is taunt 250 which just causes it to state the ai version.

Just experienced the AI resigning when we were 3 minutes into the game. Standard difficulty. 4 vs 4.

No one had started attacking yet.

Am I missing something

*Edit
Just tried Moderate difficulty 4 vs 4. Score Below. Resigned in the game straight away, 8 minutes in. Had AI start to attack me and killed 4 units, no buildings. Currently on most recent version 101.101.33315.0 Base 4426672. Downloaded the game just yesterday.

Hello WaroftheRoses, do you have a recorded game file of that (or a screenshot of the settings you used)?

Thank you for the feedback.

I dont have of that game but I will give you a screenshot of the settings as they are the same each game. 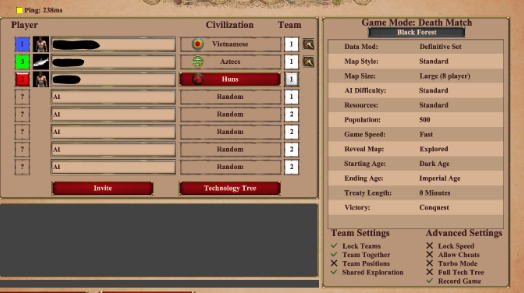 *Edit
We played one whole game on standard and it was fine. We played same settings with moderate and they resigned 8:50secs.

Thank you, we will try to reproduce the issue. 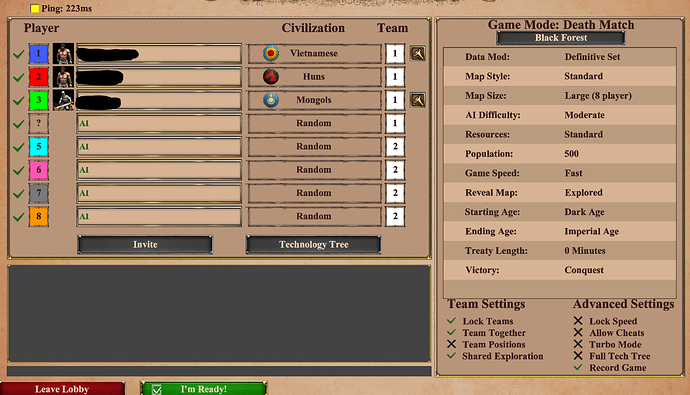 Following settings. Using code ‘104’ make sure you chat the enemy AI as well as the everyone feature. stops them from resigning at all. But you have to be aggressive to wipe them out as they basically are instant rebuilding. You will need to destroy every last building and milt/villager person to have them say they are resigned with a line through their name.

I am still having this issue. I almost exclusively play the game with a friend where we are one team against several AI teams. We have not been able to get the AI to not resign ONCE since launch. We are definitely sending the command to all enemies (using the ‘everyone’ chat function). Is this still a bug or is there a setting I am missing or something? Here is a screenshot of our usual settings 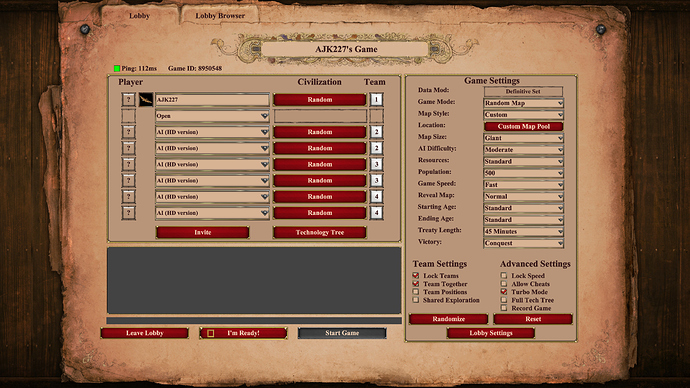 Hello @AJK227, which map did you select in that match and roughly when did the AIs resign?
If you have a recorded game file where the issue occurs then that would also be immensely helpful.

Thank you for the report.
-Promiskuitiv