Already Nerfeen the Steppe, by God!

With 3 thousand games in the new patch, the imbalance of the Mongol has been demonstrated >1500

Castles are usually reached in minute 15, from minute 20 to 24 744 games have been played with 60% winrate, balance the Mongol for God’s sake 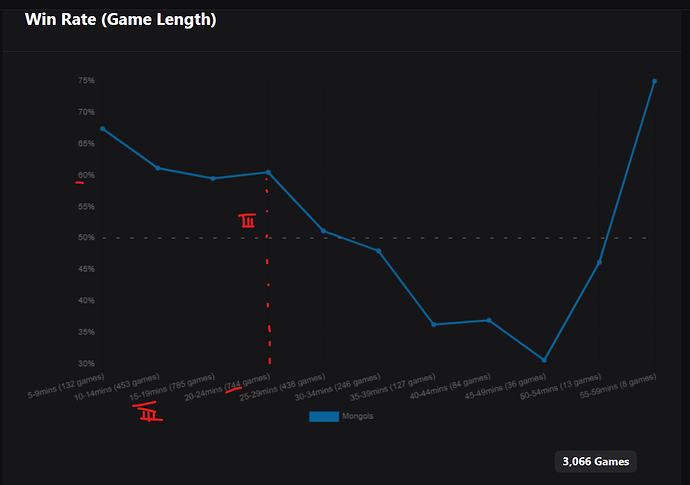 The patch didn’t land yet, did it? Or is this PUP data? 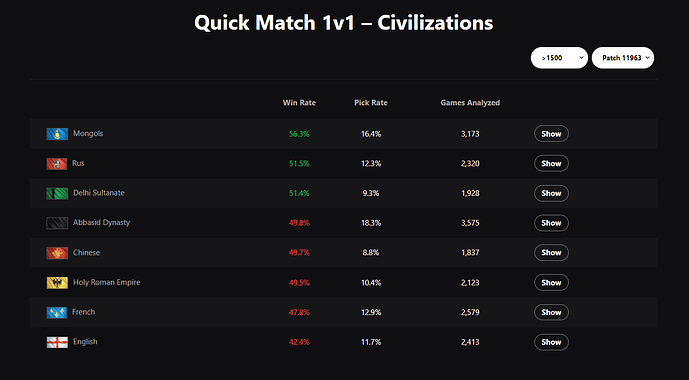 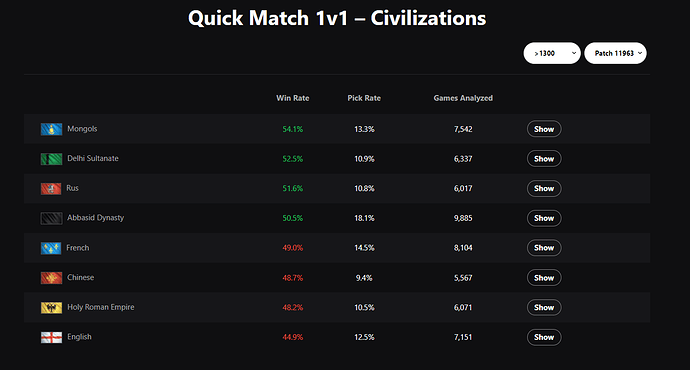 so Mongols are still OP in PUP now?
like how?

Are you both two Bronze League Heroes done with those silly whinning thread?

Go watch N4C and Golden League, Mongols are no longer on the top spotlight in a month. The faction being good or not mainly depends on the map.

I think the biggest issue with mongols right now is their ability to build siege in field which is being nerfed next patch.
Once patch comes out we gotta see how that affects their win rate. Mongols had the lowest win rate on the n4c tourney so devs really need to be careful not to overnerf the civ and make it botton tier.
Also note that many other civs are getting buffs too.

Castles are usually reached in minute 15, from minute 20 to 24 744 games have been played with 60% winrate, balance the Mongol for God’s sake

Totally agreed. This is becoming ridiculous, with massive stats screaming for months.

Every fetish has a limit. If you think about it, Mongols are the only civ in this game that vanished early and thoroughly from history. 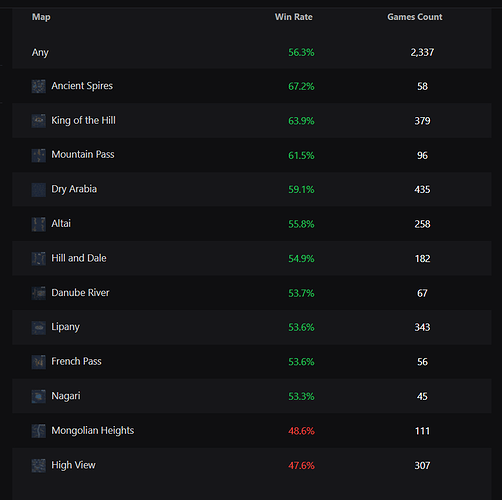 Also, those stats don’t account for match-ups. What if a certain percentage of players above +1500 only pick specific Civs? and are matching with other players that just pick 1-2 Civs? The results are different depending on which Civs are matched against one another. Fewer “Games Analyzed” of course as well, and I guess that’s where the data is missing. You don’t get an accurate painting of the whole spectrum unless the same number of Games Analyzed and Pick Rate percentages are set with a specific threshold, and then comparing that to the specific Civ vs Civ match results.

An example of what I’m trying to say. The “resolution” of the win percentage is not as “defined” when let’s say a Civ has a 50% win rate and it’s only analyzed 2 games, verses data of another Civ that has analyzed over 5k games with a 50% win rate. You can’t compare the two as one is more fulfilled and defined with number of “Analyzed Games” than the other.

There just seems to be too many factors and I would treat those number loosely, as you can’t compare which Civ is better than the other looking at this list.

AoEWorld in the FAQ section describes this data:

First of all: in the period following patches or when using narrow filters (i.e. looking at >1800 rating) the data size is small and statistically speaking not significant, so be careful before you jump to any conclusions. The data may point at different assumptions: i.e. you may be looking at a subset of the best players trailblazing new strategies or playing against people with lower ratings, or simply the new meta after a patch has not been developed yet and people are playing in ways that don’t reflect how the balance team intended them – who really knows? Generally speaking, first check the games played before your overheat your keyboard on Reddit (we take zero responsibility for you making a fool of yourself <3 )

The Mongols have a <50% win rate on Mongolian Heights.

Data from the new patch, the Mongols win between minutes 24 and 29, some more proof of the exaggeration of the steppe! 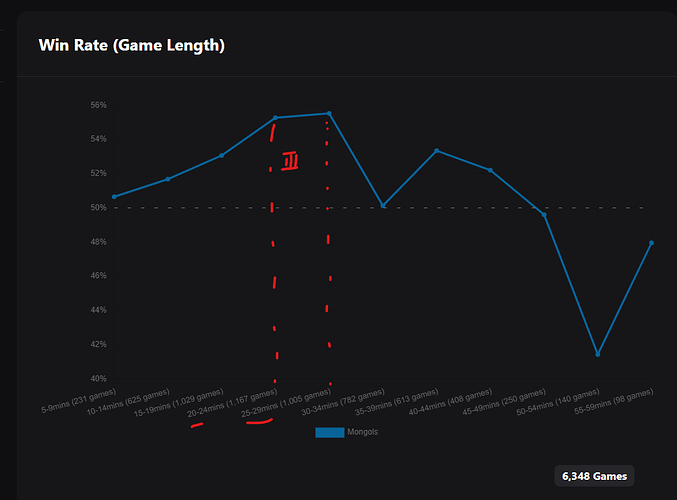 I think they are going to take the results of the Golden as a reference, but after the mandatory bans, they should not do it

I am at low elo.
I think the mango nerf is also a huge hit for mongols. I think we should wait a little bit more before asking for more nerf.
I play Mongol,hre as main, and I think in the season one HRE,english, abbasid, and even delhi is better than them.

if they are making gradual nerfs, I will be waiting for the results of the new statistics

castles are usually reached at minute 15, where they win the most games 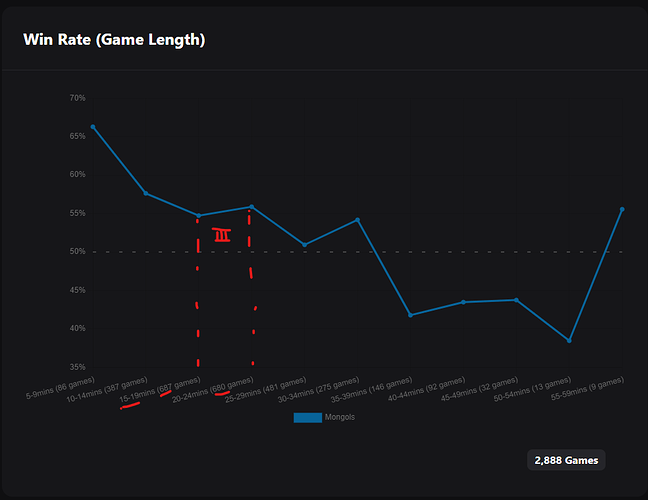 they could lower the price of the castle age outposts to 60 wood, but there can be no bonuses of more than 45% like the steppe in the game 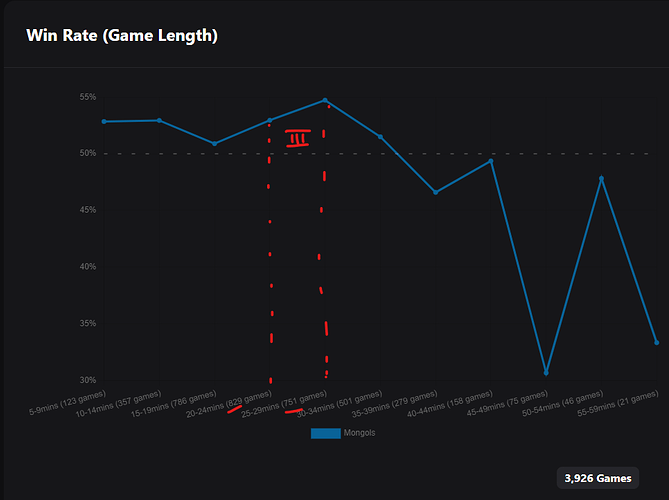 Mongols winning in Castle has little to do with Redoubt. Mongol’s unit composition doesn’t balance out till Castle Age. It’s our first, “nonall-in” window. We’re also encouraged to attack at that point, because every other civ can build defenses and we cannot. Longer the game goes, more defenses we have to work through while closer to equal army numbers both sides become.