This is the first issue that I’m reporting here.

The problem I am experiencing is related to the troops.
My troops, enemy’s troops or even Gia units get stuck in buildings, cliffs and sometimes even fall into the cracks.
They also suddenly jumps on the cliff and get stuck there as there is no way to get down.

I have attached some screenshots and a clip so that you can understand it better.

In the above video it can clearly be seen that an Aztec troop got stuck in a Gulf and then two of British Cavalries fell and jumped back up. And in the end Aztec Hero fell into the Ditch and came out like a champ.

Although this issue doesn’t affect the gameplay or performance of the game, atleast not for me. But it still need developers’ attention because it may create problem in the campaign’s scenarios where we dont get to build a city and rely on the troops that are already given to us. Also it might hugely affect the outcome of the game in multiplayer.

Can second that; I’ve even had entire armies get stuck inside of water, because they’d walked off a cliff and glitched through the map

Thank you for posting! I got an entire goon mass stuck in my ally’s (Incan) war huts and kallanka plus a native settlement on Himalayas. The worst part is that you can’t even pull the other units away to see which need to be deleted.

I have had similar issues too. I got a bunch of units stuck on cliffs, seemingly scaling cliffs impossibly, and stuck on a trading post. I tried deleting the trading post, but the units were still stuck and I could not rebuild the trading post. Morgan Black was one of the units stuck. These issues have happened in at least two campaign scenarios so far and is bad enough it makes the game significantly less desirable to play.

@JohanDeKoln yeah in the Campaign, it’s gonna suck. It happens with me in every match i play in Skirmish.

Let’s hope the Full Version will not have these issues. It’s acceptable since it’s a beta version. I have lots of bugs to report but I am waiting for the original game release.

I have a similar issue with units spawning at the town center. If I play a card or tech up and an outpost wagon spawns at the town center - it can get stuck inside previous spawns (e.g. food pile). I have to wait for my villagers to consume the resource before the unit can finally be moved.

@TehLethys happened with me lol. Let’s just wait for the full version to come out. May they have already addressed these issues in the coming version.

I think I have a related issue to note.

Here is the problem I’m experiencing…
When I play on Andes and build units from the Inca minor settlement, if the rally point is on the other side of the native town, the units will path through the town and get stuck inside of it. Once stuck, there is no way to get them out.

The units should path around the minor native town as in AOE3. Alternatively, they can path through the town as long as they don’t get stuck.

They got stuck. See attached image.

No game files available as I have already deleted the game, I apologize. Release version is set for today let’s see if it is fixed.
@Luciton

Yes, this is one of those issues that should be a pretty quick fix. All depends on how high up on the Trello board it makes it.

There is something wrong with the rigid body. Two rigid bodies are collapsing. Like the native settlement. Troops should not go inside boundary should be set for the body. Idk something similar maybe
@Luciton 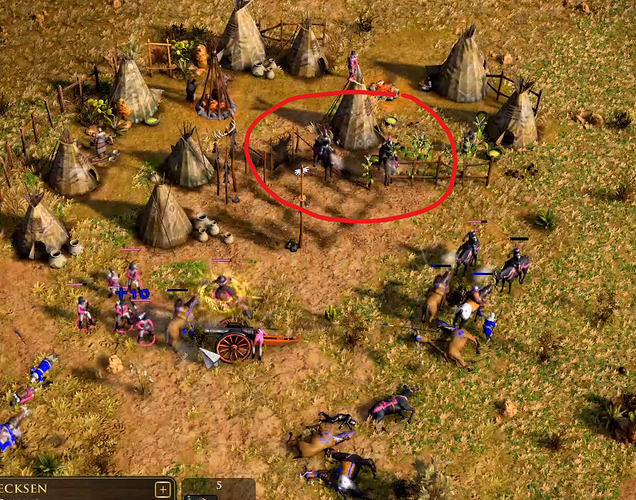 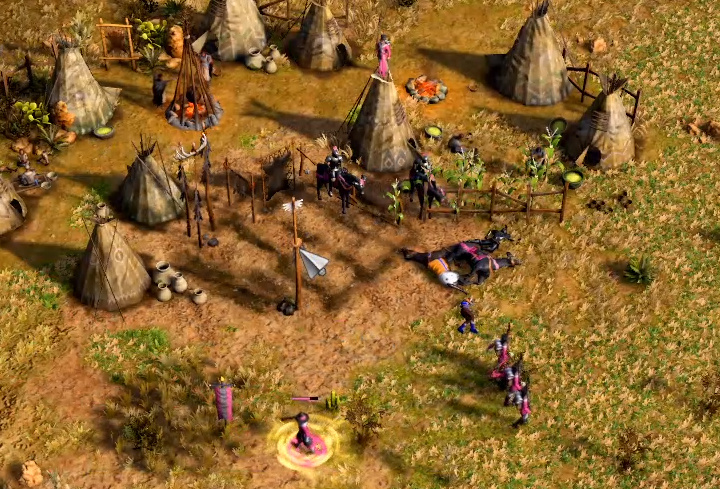