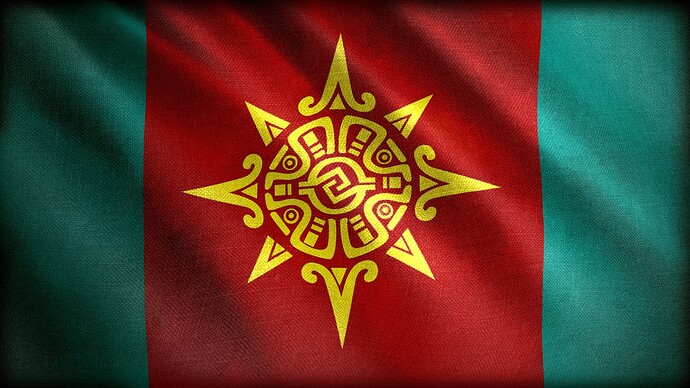 Meritocracy**:** Units are able to be promoted into Eagle or Jaguar warrior variant by killing 4 units by a Tlamacazui religious unit. Promotion fully replenish the units HP.
Killing enemy units grants Offering resource.
Devine sacrefice: Teocalli can use Offering resource to promote units into Eagle and Jaguar units, Through Sun tribute or Night tribute.
Is also able to globally boost food production for 10 seconds per Offering.

Functions as a religious building that can store relics. Units garrisoned into the Teocalli will be turned into Offerings. Teocalli has a ability: Blood Ritual that makes the Teocalli count as having 1 relic stored for consuming 1 offering every minute. Relics stored in Teocalli’s grants 50 of each resource and 100 gold per minute.
Teocalli is also able to Promote nearby infantry units automatically by activating Temple of the Sun or Temple of the Night ability, at the cost of 4 offerings per unit.

A religious unit that is able to heal and promote infantry units into Jaguar or Eagle warriors through their Priest/Pirestess of the Sun (Eagle) or Priest/Priestess of the Night (Jaguar) ability active. Promotion happens to any non-promoted unit that has 4 or more kills.

Jaguar promotion grants unit Stealth ability when standing still, as well as Life-leech ability when doing damage to enemie units, their attack speed increase by 10% for every 5 seconds in combat up to a maximum of 30%.

Increases line of sight of unit as well as movement speed by 25%. Gain a Sprint ability, doubling their movement speed for 5 seconds, and causing their first attack to do double damage while the ability is active.

Architecture: Legend tells us that the first building constructed in Tenochtitlan was the temple honoring the Aztec god(H)Uitzilopochtli. We know that the Valley of Mexico was heavily populated at this time, and many of the surrounding towns had public buildings. Many of these buildings were temples. We also know that Tenochtitlan was well planned, and its aqueducts, roads, canals, and buildings were constructed by highly skilled masons. The Aztecs used limestone rocks and adobe bricks in their construction. Houses all had inner courtyards, they were painted white, and had flat thatched roofs. Only the nobility were allowed to have two stories.

Naval units: Early Spanish writers commented on the fact that the lakes all round the Aztec capital were peppered with canoes of all shapes and sizes: carrying goods to and from the city (and especially the great market at Tlatelolco), removing waste, ferrying warriors and raiding parties and - as in Venice - doing many of the every-day transport jobs now carried out in cities by buses and lorries. River/lake/canal transport is a very efficient means of getting goods from A to B. In a society without wheeled vehicles or draft animals, the canoe played a crucial role in moving heavy loads. Indeed, the growth of Tenochtitlan and Tlatelolco into one of the world’s largest cities was certainly due in part to the huge success of the fast-moving, largely water-bound, traffic to and from the main market. Most general purpose canoes averaged 14 feet in length, were dug out from a single tree trunk and with upturned ends, and were propelled by wooden pole (or paddle). At the other extreme, the largest canoes, made of straight-grained spruce trees, were 50 or more feet in length, capable of carrying either 60 passengers or 3 tons of maize. Little wonder that the Náhuatl word for canoe was acalli or ‘water-house’, from the two words atl (water) and calli or house: the Spanish noted that Aztec boatmen would often sleep in their travelling canoes on long journeys

The Aztecs would speak the Nahuatl Language, although it hard to point out exactly how the langauge developed. There is a recorded difference between what was termed Paleonahua and Neonahua. The Paleonahua developed over several centuries, beginning its process of change during the Teotihuacan era, being more conservative in eastern Mesoamerica. Neonahua, however, arose when the Toltec-Chichimecs spread throughout much of the Valley of Mexico, with linguistic innovations such as the addition of the sound /tɬ/.

Note : Unit does a Atlatl attack on their first attack which is a ranged attack.

Write-up:
Aztec history has a lot of surprices, and is quite often a misunderstood history.
People have a tendency to sum up that the Aztec was 1 sole entity, but it was far from it.
And it was the very reason why the empire fall as fast as it did, it wasn’t only due to the Spaniards being technologically Overpowered. But because the Aztecs had managed to create a lot of emnity among their neighbours. And the Spaniards were merely the catalyst needed to overthrow the otherwise militarily superior Aztecs, or to be more exact, the Mexica-empire. Yes the name Mexico derives from what the Aztec called themselves: Mexica. As Aztecs was a term coined by the Europeans.
So all that was needed by the spaniards was to rally all the Nations which have been wronged by the Aztec empire to rise up against them.

Now with the 2 new civs of Ottomans and Malians having been announced by MS/Relic. They really showed how far one can push the boundries of the game.
New mechanics are getting added and even a full custom unit rooster (for the Malians).

This is something I’ve always had in mind for the Native-American civilizations. And now this brings bigger hope that these civ’s actually can be added to the game, as developters are willing to push the boundries.

The Malians were never a gunpowder civilization, infact, much like the Native-Americans, despite all their wealth, they never managed to obtain Gunpowder weaponry, despite them constantly seeking it out.

So for the gameplay on the Aztecs I wanted to focus on the Aztec warrior culture, Eagle warriors weren’t just men who ran really fast represented by AoE II and III.
But they were warriors equal if not a higher status of the more famous Jaguar warrior.
Infact the weaponry were the same between Jaguar and Eagles, and the only difference was the God that they represented and quite often their social status, Eagle warrior stemming mostly from nobiltiy while Jaguars were commoners.
In Aztec culture, Everyone (Except for females) Were trained to be a warrior.
And the way to become a Eagle or Jaguar warrior was to have gone out in battle and bring back 4 captives. Only then was one worthy to be a Eagle or Jaguar warrior.

The Jaguar and Eagle warriors are essentially boosted up regular units but with unique abilities ontop of it all.
The Eagle Warrior gets its signature mobility bonus, but also a charge attack.

While the Jaguar becomes someone who specialised in setting up ambushes and thrives in prolonged fights.
The Eagle and Jaguar warriors also believed that by donning the Eagle or Jaguar looks, they would inherit the fighting prowess sof the animal they represented.

Religion also played a very important aspect which is where their Unique Religious unit, Tlamacazui and their Unique Monestaries; Teōcalli, comes into play, converting units into Jaguar or Eagle warriors.
They also get access to their own Unique Horseman, the Tlaxcalan Cauallero.

The Tlaxcalan were of Aztec culture, but a victim of the Aztec flower war, they were being farmed by the Aztec triple alliance (what we recognize the as the Aztec Empire), for sacrefice. So when the Spaniards arrived, they were among the first to ally up with the spaniards despite having fought against them at their arrival.

They became quite loyal to the spanish, as well they played a key part in the spanish conquest of the Aztec Empire, that the Spaniards saw them as a higher class Natives in the americas, and gave them unique privileges in the spanish empire as well as training them in the use of Horses and providing them steel weaponry and armor, which quickly became a status symbol among hte Tlaxcalans.