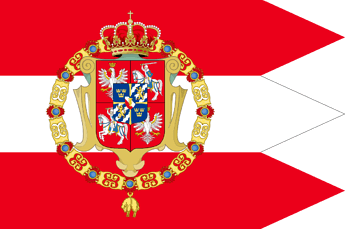 Build the Royal Castle to age up (Like the House of Wisdom)
You pick politicians to age up like AoE3, but no instant stuff. Takes same time as Abbasids. This is also where you research your unique upgrades.
5,000 HP plus an additional 5,000 per age.

2nd Town Center Built will function like the First. Meaning Has bonus HP, functions as a landmark for a landmark victory, 20 garrison space, and shoots extra arrows. So basically you normally have 3 Landmarks all game long (4 with an age 4 upgrade).

Balance of Power Mechanic
7 levels starts in the Middle called Golden Liberty can move towards more Crown Power or towards more Szlachta power. This reflects the power structure of the Polish–Lithuanian Commonwealth, where the crown had to concede power to the nobility.
Being Crown leaning specializes at the Economy, Infantry and Light Cavalry while sacrificing your defensive bonus.
Being Szlachta leaning specializes at the Defenses and Cavalry in general while sacrificing your economic bonus.
Staying at the middle gives more bonuses to your Unique Units. While retaining all your bonuses.

Unique Upgrades
All Upgraded at the Royal Castle

The Engineer
Does not move
Blockhouses -20% cost.

The Inventor
Does not move
Royal Castle now functions as a university. Can research age 4 university techs at age 3. They are 20% cheaper at age 4.

I love how people propose all these ideas for new civs, I really hope devs take the time to read all this! great job! however, we must focus on claiming things that are more needed I think (see other posts where this is explained deeply). because the most frustrating thing will be when the new civs are NONE of the ones the players have proposed in all this time