Closed beta player checking back in - Zoom still not fixed?

Checking back in here.

I can’t enjoy the game with the current zoom level so I’ll continue to play aoe2 which has a level of zoom I enjoy playing at. simple as.

Not surprised to see in the months since I stopped playing this game has bled players compared to AOE2.
I will tell you the exact reason that AOE4 will never keep as many players as AOE2: the devs do not care what the community wants. Many many people have asked for the zoom level to be fixed since the CLOSED BETA of the game. It is something that can be fixed with a simple number change in the code. Still isn’t fixed 8 months after the game launched? There’s no coming back from that one.

If I sound mad it’s because I love the RTS genre I dearly wanted AOE4 to be a success. It pains me to see such simply resolved issues be the downfall of a game that could have revived an entire genre.

the devs do not care what the community wants

It isn’t as simple as that. I’d say that the things they’ve done have for the most part moved the game in directions requested by the community. It’s just that the rate of making changes has been quite slow, so only a small subset of what has been requested has been accomplished so far.

There are exceptions to that, the zoom level being one, where it does seem to be a conscious choice to not change it, despite many people wanting it changed. But I don’t think it’s fair to extrapolate from that to them not caring what the community wants in a wider sense, as a huge amount of what they have done has been in response to what the community has asked for.

There was a time when I was asking for the field of view to be increased to double the horizontal and vertical distance it currently covers, on the basis that it’s just a choice how much of that you use, so why not make the extremes ridiculous so that everyone can have their preferred view without using the extremes. I’d settle now for 25% extra, so you can comfortably see the starting gold with the TC at the centre of the screen: 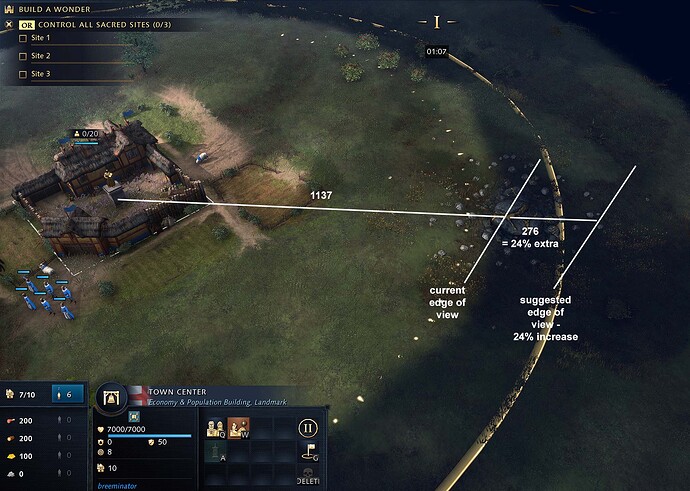 I can see the arguments about units getting too small, so I’d also like this to be accompanied by an option to adjust the unit scaling, so the people who want them reduced in size to be in proportion to building features can have that, but so they can also be scaled up a bit larger to remain the same size as now when zoomed out to the new level.

the devs do not care what the community wants. Many many people have asked for the zoom level to be fixed since the CLOSED BETA of the game.

They did increase the Zoom since the closed beta. It might not be as much as you expected but it was significant.

It is something that can be fixed with a simple number change in the code.

No, it’s not. Increasing the distance would have a big impact on performance and might require them to raise the floor for the game specs.

Zoom is fine as it is. You just need to learn how to move your camera efficiently. This game has a hundred issues but the zoom isn’t one of them. Posting steamcharts doesn’t prove your point and really doesn’t add anything to the discussion. Yes AoE2 is more popular but there’s nothing proving that zoom is the issue.

plot twist:
they did ingame mods so ppl can not change zoom by mods. To cover their mistake. An not show that it will be the most popular mod.

You just need to learn how to move your camera efficiently

again adept of scholars. learn learn learn. that’s why game will remain with 5k players == too much learning.
even in aoe2 you can just play game, build city… ah whatever just learn how to move your camera.
The first ■■■■■■■ game there advise was given to learn not game/strats, but moving camera

Increasing the distance would have a big impact on performance

I’ ll spell it for you B U L L S H I T
distance can be changed via MAPS, and it works good.

mod for increased zoom would probably dwarf all others, similar to aoe2’s small trees mod

hmm , you dont have the ageiv close beta badge that i have , are you really a close beta player?

Zoom is fine i guess…

its not the reason on the downfall…

hmm , i think its not something about performance , its a thing about LOD and distance rendering .

If they change zoom , they need to change LOD settings too , so the game doesnt look like garbage , zoomed out .

Another problem about zooming out is fog wich is notorious if you zoom out.

Game was designed faulty from the get-go. Now they cant add more zoom because it breaks the game.

And, yes, it is astonishing how AoE2 still wipes the floor with AoE4 in player numbers.

casual players are more interested in cooperative rankeds, the game is not complete yet

Comparing AOE 2 to AOE 4 is like comparing Crusader Kings 2 and Crusader Kings 3. You can’t reasonably compare a game with years of extra development and polish to one that’s formally been released for less than a year. It’s really difficult comparison to make fairly.

AOE’s 4 second big mistake is a lack of developer streams. Social media is not a novelty anymore. It’s a must. For anything that requires a community to function or hype to push the “purchase” button, you need as few layers between public and the design/developer team. The public has to see those developers not only absorbing community feedback, but commenting on controversial design choices, commenting on game methodology and plans, To be reassured that it’s not a management team playing business degree games that ultimately are undermining the reality of the product. Streamers are only one cog in that process.

Star Citizen is obviously a good example of this. Most Kickstarter games live and die on this concept. But a peer in the gaming industry pretty comparable to AOE is World of Warcraft. Look at how they have empowered developers at every level to generate hype, explain design choices and show the public the health of the design team. That hasn’t really happened with AOE. And so, the playerbase feasters with it’s own form of mob rule as we speculate and play facebook democracy on “why something happened” or “what AOE is”.

You seem to have put far more thought into the camera than the developers.

I agree with you developers should strive to give extreme options at either end to accommodate for a wider variety of preferences.

I was there, I played both the closed and open beta. The “change” they made was so miniscule it was obvious to everyone that the developers wanted to just put in the patch notes “fixed zoom” without actually doing it in the hopes that people get placebo’d into being content. That strategy unfortunately doesn’t work when the thing the community is asking for is a real issue that effects their ability to play the game. I need to be able to see both the trebs and the enemy buildings in the same screen, I should be able to zoom out far enough to accommodate that.

“Zoom is fine as it is. You just need to learn how to move your camera”

Yeah nah, not fine for me and I don’t feel like “learning” something to accomodate for bad decisions by the developers, when there’s a game right there for me to play which has long resolved this issue (AOE2DE).

Looks like “they’ll get used to it!” isn’t really working out for the game based on the player numbers.

The art, gameplay and optimization of this game is so delicately designed that if you zoom out a little more it will completely ruin your experience. You don’t know. You’ll hurt yourself if you’re allowed to zoom out more. So they fixed it for you. It’s good for you and be grateful.

This guy just likes to come in and spam this single topic every month or so.

It’s getting tiresome. Would an option for more zoom in custom games be okay? Yeah. Sure. But the devs have better things to spend their time on. Like picking lint out of their bellybuttons.

clouds can be removed from the map using “editor”.

On cheamcharts yes, but if you check the ranked leaderboards we have 30k players who ONLY have played ranked.
This is without the players who only play custom games, quick match or campaigns.
Don’t rule out the amount of gamepass players with the secret number, we never will know.

you dont need any qualification to delete fog in scenario editor .

The game looks imo bad without the fog.

it looks vivid but at the same time some fog makes the game look more complete and with an atmosphere.

Stop saying they are un-qualified , its an statement with a lack of any fundation