DLC - request to the developers

houses: doesn’t make sense that Poland get pristine 1700-1800 capital city houses when everyone else get improvised colonial style housing. i am sure there are some rural houses you could use.

In the game, houses change appearance with the new age. 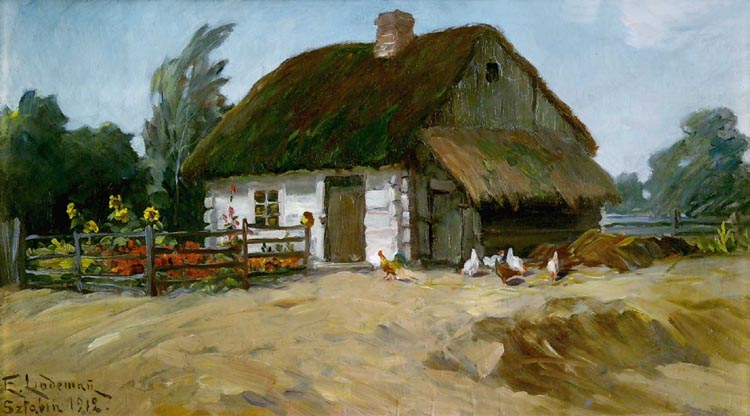 Poles Houses in the Colonial/Fortress Age 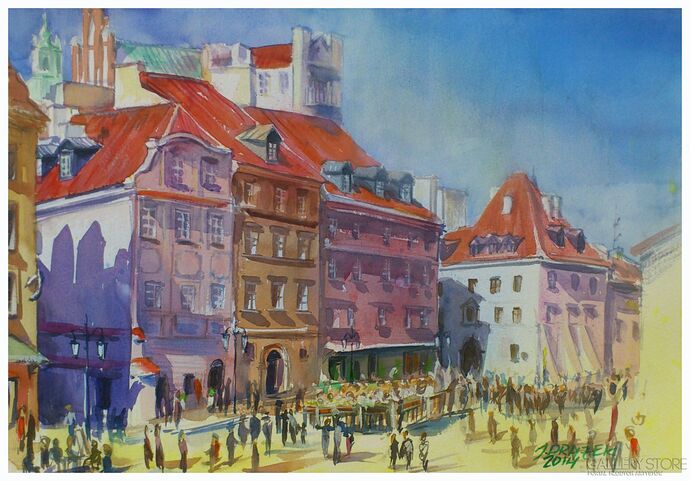 Sorry, but it doesn’t look special to me. Maybe you have some more interesting information about the Danish military.

the units i would see are: 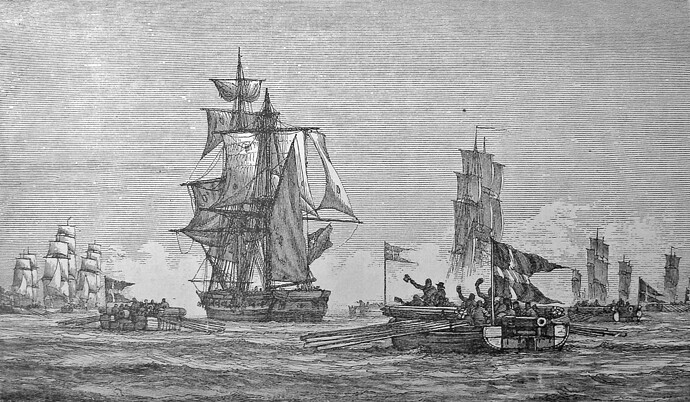 landsoldat (unique musketeer, similar typical musketeers but slight cheaper and with much worse melee, will force you to use other units against cavalry.) should have a reform card in industrial turning them into better version but more expencive (think similar to chinese old han), picture is from the Schleswig Wars (so post reform), i would have liked to have showed you a picture from 1700s my professor showed me but i cant find it right now. 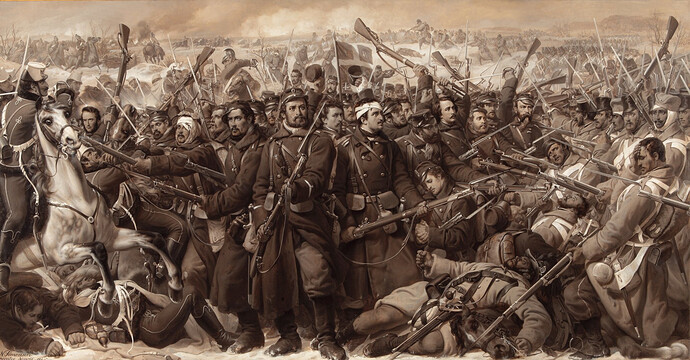 if not for what sweden just got then denmark also could have had a special dragoon type unit similar to the harqubusier since they used them during the 30 year war, but perhaps just make it a mercerary politician.

the pen/mill thing: this kind of already exist in the game (farm for natives) but its not a super useful building, it is a super annoying building to use, and this polish 1 looks absolutely huge. i am also not sure how this is different than any petty noblemans estate in any other part of europe. 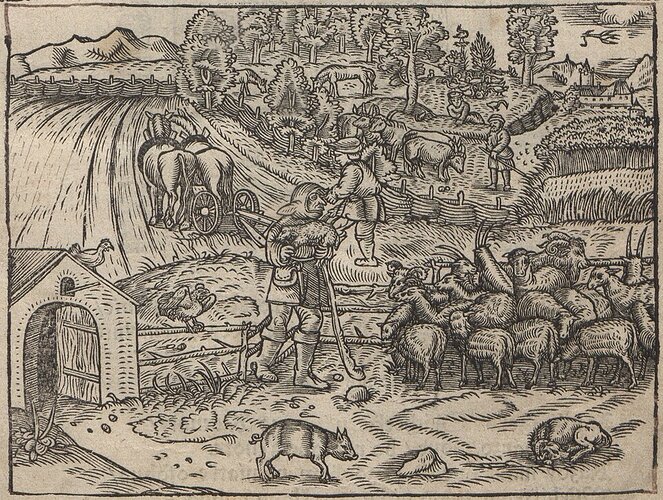 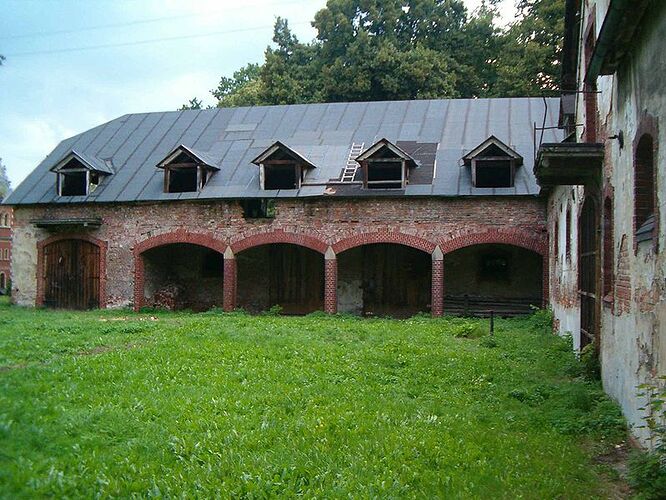 Folwark - Works like a natives farm (it has different technologies).

The animals would be standing around the building. The fields would resemble the Japanese Cherry Orchard (limit 4 per folwark). Could be built from the folwark option.

super villager: i dont see how making a berry bush is a good mechanic, it sounds super uninteresting because berries just aren’t that good. also is this gonna come at some cost to villager population? or like what is the idea of this unit really other than just name? 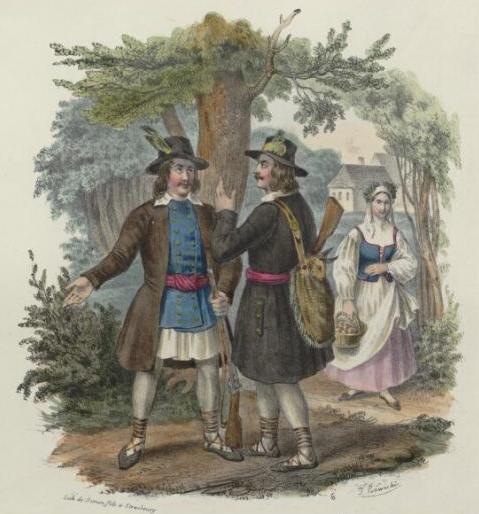 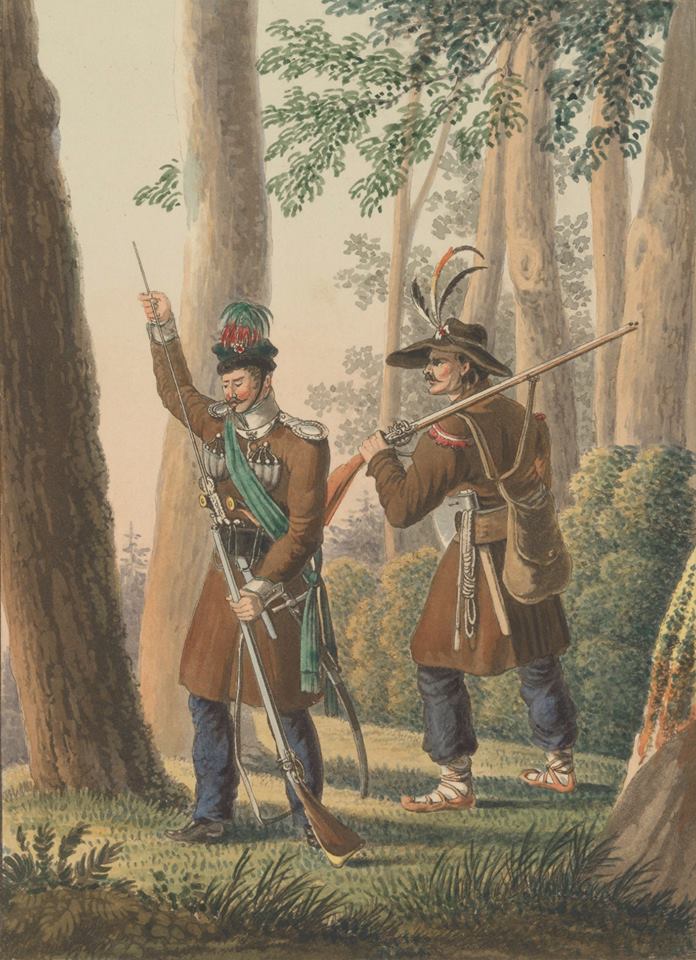 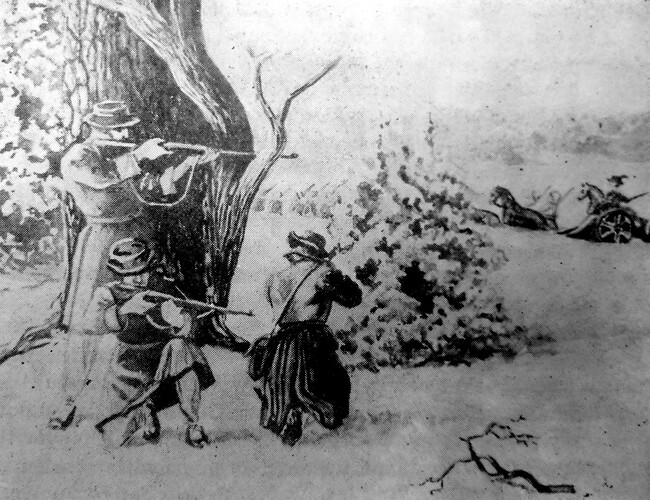 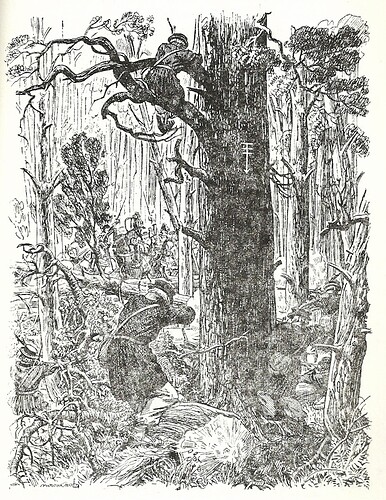 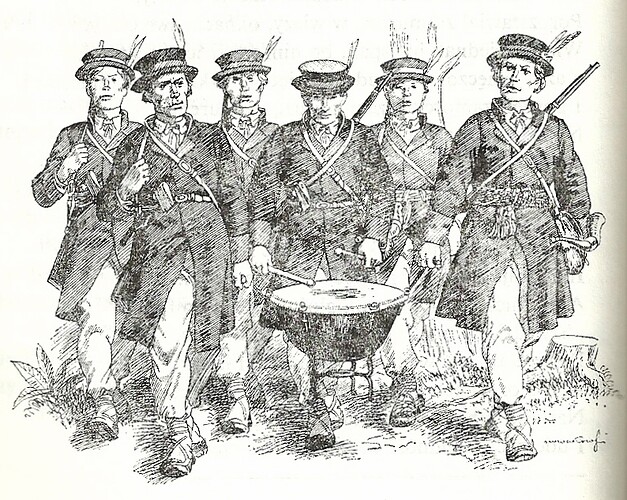 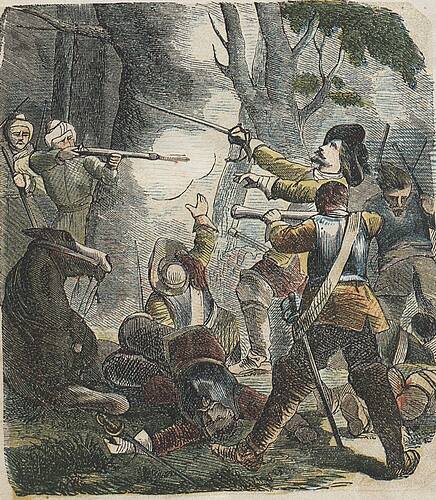 About Kurpie
The first people who settled there found the heavily forested area to be sandy and muddy. Beekeeping, producing pitch, and iron smelting were the principal commercial occupations with beekeeping highly regulated; however, families also hunted and fished, gathered mushrooms, collected fruits and nuts, and generally used the forests to provide them with their daily needs.
In the Polish-Lithuanian Commonwealth, Kurpie people were famous for their shooting skills. During the Kościuszko Uprising, it was from them that members of the elite units of customs shooters - precursors of snipers - were recruited. Kurpie gained fame during the November Uprising when Lieutenant Colonel Józef Zaliwski created partisan units - “Kurpiki Ostrołęckie”. In the regular Polish Army, the 6th Battalion of Customs Rifles, commonly known as the “6th Battalion of Kurpie”, was also formed in this period from Kurpie. But they gained the greatest fame in battles with the Swedes. In 1708, a battle between Kurpie and the Swedes took place at the Kopański Bridge. The Swedish king Charles XII was in danger after the Kurpie attack. During this fight, the ladant beside Charles XII was killed - which proves the accuracy of this peasant people. The Kurpie people then defeated the more numerous and much better armed Swedes.

cav archer: isn’t this unit just the same thing as what russia and ottoman got, i dont see why this is a unique unit. part of the roster for sure but not a unique unit. Lisowczycy (Polish pronunciation: [lisɔfˈt͡ʂɨt͡sɨ]; also known as Straceńcy ('lost men' or 'forlorn hope') or chorągiew elearska (company of elears [pl]); or in singular form: Lisowczyk or elear) – the name of an early 17th-century irregular unit of the Polish–Lithuanian light cavalry. The Lisowczycy took part in many battles across Europe and the historical accounts of the period characterized them as extremely agile, warlike, and bloodthirsty. Their numbers varied with time, from a few hundreds...

winged hussar: so is this a guard hussar or a unique unit, you write its a hussar but then you give them this weird charge thing (which shouldn’t be a thing in the game, but that is another discussion) which indicates that the unit is a unique unit. idk here is an idea but maybe make it a lancer with more hp but lower resist and bonus dmg?

It’s a good lance idea. The winged hussar could be the Polish equivalent of the Spanish lancer. Of course with other stats and appearance etc.

guard musketeer: yep saw that coming, tho maybe use the more known name of polish legion, would make it easier to read for a lot of people.

light cavalry unit: might be wrong but i am guessing this is essentially just cossacks from russia? i’d probably suggest not adding it since usually you just use 1 cavalry unit if you got 2 melee ones anyhow.

The Russian Cossack is the Don Cossack. I was referring to the Zaporizhian Cossacks. 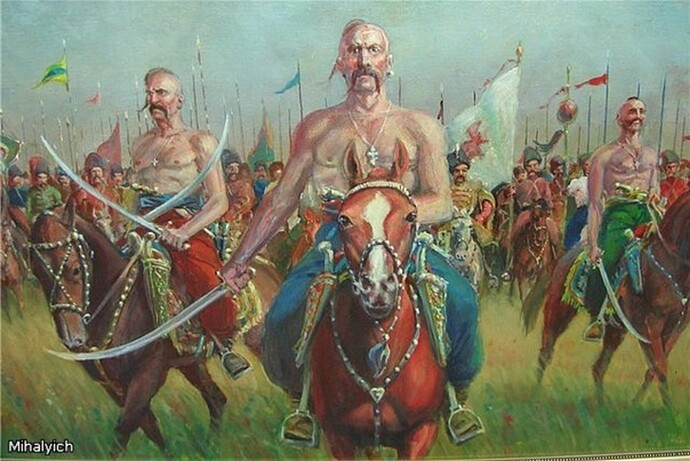 i looked the other day on wikipedia and found a picture of polish units of the periode, i saw some sort of axeman? perhaps a unique melee infantry unit? just an idea.

About axes used in the Polish-Lithuanian Commonwealth:

In the former Commonwealth, in the form of decorative ice axes - walking sticks were eagerly used and carried by the nobility. Attempts to preserve the ax as a weapon were made by numerous constructions combining firearms, most often with a wheel lock, with battle axes.

I invite you to vote:

poll This poll is only about that one mod. Information about this: Personally, I propose a season pass for this game. The above mod could be one of its DLC.

There are plans to add Danes

yeah, i imagine his work is disrupted atm tho, obviously there is a lot of work yet to be done in AOE 3 DE to make the game bug free.

This mod adds such civilizations from Europe:

If this mod was a DLC, we would get a solid boost of civilizations (7-8!). Anyway, the developer would have it easier (only conversion and improvement to DE).

7-8 new civs is way too much, some of them (f.e. Italians and Swiss) are not really that relevant.

There are many things to choose from for a better experience, better play and content. I don’t know why they obsess over Europe, where it’s obvious that they will plagiarize the original 8 Civilizations.

Yes, ironically, Age of Discovery One of the meanings is Eye On The World

Of course, if it is for commercial benefit, I would love to see paid DLC

7-8 new civs is way too much, some of them (f.e. Italians and Swiss) are not really that relevant.

There are many things to choose from for a better experience, better play and content. I don’t know why they obsess over Europe, where it’s obvious that they will plagiarize the original 8 Civilizations.

If there was a DLC about Europe, you don’t have to buy it. Italians and Poles distinguished themselves very much from the rest of Europe. The Austrians were very important - they should have shared architecture with the Germans. Africa will be 100% new DLC, their presence in Historical Battles is a sign of this. So if that’s a sure thing, let’s think about the rest of the globe. There are no European very important empires. There are too few Asians and Americans - this is a problem. AFRICA WILL BE IN THIS GAME !!! It is not known whether as a DLC or as a free update, but it will be. 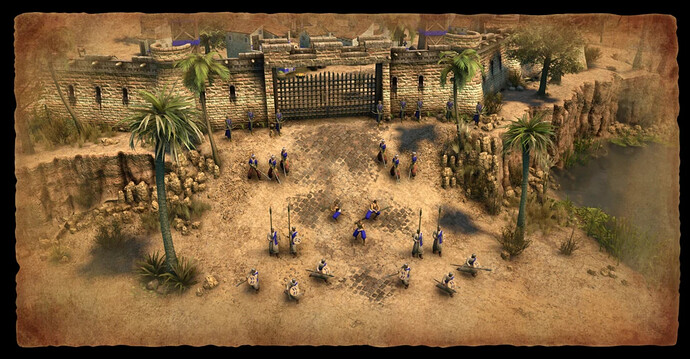 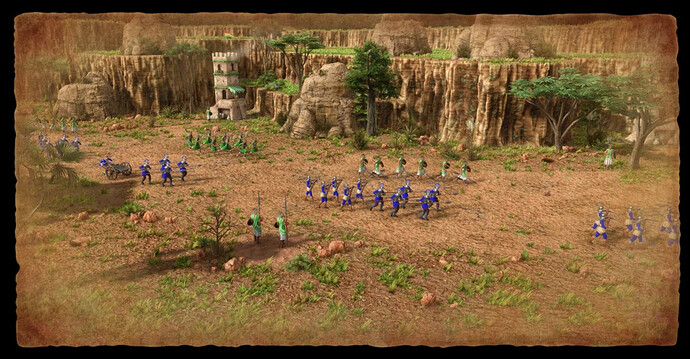 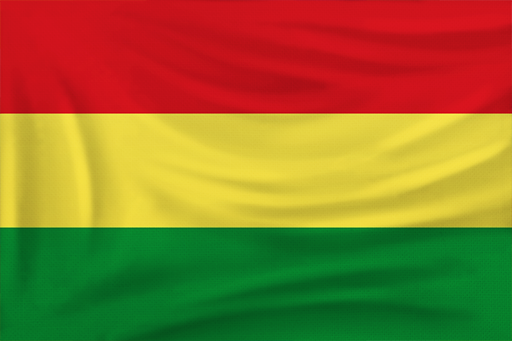 USA would be great. Besides, they were the first revolution in the colonies. It would be nice to see them as a playable civilization.

It’s clear why past developers didn’t choose the new European civilization. Because they didn’t want to damage their colonial game. Because of that, they stopped adding Sweden and Italy as new civilizations.

I hope the new developers who succeeded them will not forget the minds of the past developers. It’s important to advance the game.

It’s important to advance the game.

I don’t think the Swedes designed by the current developers are at all suitable for AOE3. They hide their incompetence with sloppy combinations of cards and sloppy units. And some of their characteristics made the Germans completely ignored. You know well what kind of controversy the Swedes are now bringing about in multi balance.

If you don’t know, it will be proof that you’ve been ignoring multiplayer for solo play only.

Yes. I want a new African and Asian expansion as much as anyone, but I also want a 30 Years War expansion with a few more European civs and European maps.

Keeping the game Colonial-themed, is ridiculous at this point, and will actually hurt it in the long run.

Yes, the Early Modern Age was also the Age of Discovery and Colonialism, but it was not the only thing happening in the World, or even in Europe.

Also, Ottomans look ridiculous in a game about Colonialism, without the vast majority of their traditional enemies, or their sphere of expansion.

I have made excuses for that opinion. I think you’d better check out my thoughts and think about it again. Of course, I don’t think the developers in the past made an effort to get the concept perfectly, but they did everything they could. I hope that new developers understand and inherit it.

When AOE3 was first released in 2005, the game was based on colonization. However, over 10 years now, the concept of colonization has brought controversy. I still think this concept is valid, and I want to talk about the excuses for this and the direction of the content that AOE3 should move forward. Of course, you may not like my opinion, but I don’t want to be criticized for it. This is a simple personal opinion and does not necessarily have to be applied to the game. Original European 8 civ…

I hope they break away from it. Colonial-theme is exhausted at this point.