Is there any way to set up being able to drag the map under the game camera? There is an option but it’s a clunky and unresponsive point-to-move (I’m not sure why they called it drag, presumably because you drag your mouse? Seems like that’s true of every mouse action…)

The other option is the legacy behaviour which I really like, but , for whatever reason, you can only use the right mouse button to use it. This means that it can’t be used when units are selected. Ideally I’d like to have the sort of drag movement common in rts games now, where you hold the button down and drag the map, that is, if you were to hold it then move your mouse down, the map would also move down with your camera moving upwards relatively. The legacy behaviour would also be fine if I could assign it to the middle mouse button. Does anyone know a workaround for this, any mods that fix it?

I’m playing AoEII: Definitive Edition. For what it’s worth I’m almost certain I’ve seen people use this method of movement in online videos, but I don’t know what version of the game they were using, or if it was a mod.

THISS, I was totally turned off by how it isn’t an option to do both legacy & custom. Heck, it was strange for the game to use the (new) default “drag” panning, which is clunky and unresponsive as hel* (coz of acceleration & decceleration) – it’s basically like navigating with a joystick, on a mouse…

On a professional or daily application, anywhere really, the “legacy mode” is the standard.

I admit I don’t completely follow your post, but I think you’re asking for a capability that is already in the game. If you hold the right-mouse button and drag your mouse around, your viewport moves in relation to where your mouse goes. Depending on how far away you drag your mouse, the camera moves fast or slow. I have a feeling this is what you are looking for? You can customize the mechanism by which the click-drag scrolling gets activated. See screenshot below, where I’ve highlighted in blue.

It sounds like you were half-way there, but maybe you were point-and-clicking, rather than holding the mouse button down and dragging? Please clarify a little more if my response isn’t what you’re looking for.

Ideally I’d like to have the sort of drag movement common in rts games now, where you hold the button down and drag the map, that is, if you were to hold it then move your mouse down, the map would also move down with your camera moving upwards relatively.

What you ask for really sounds like what is in the game already to me. Sorry if I’m misguided. I remember seeing an AoE4 interview with the head of that project/Xbox, I’m pretty sure, saying one of the first things he wanted for AoE is the RTS-standard of click-dragging; so I thought this is why AoE2:DE got the capability. (Or if it has been in AoE before DE, I didn’t know about it.)

Heck, it was strange for the game to use the (new) default “drag” panning, which is clunky and unresponsive as hel* (coz of acceleration & decceleration) – it’s basically like navigating with a joystick, on a mouse…

For acceleration/deceleration, you can turn that down or off in the Options. See screenshot below, where I’ve highlighted in red. 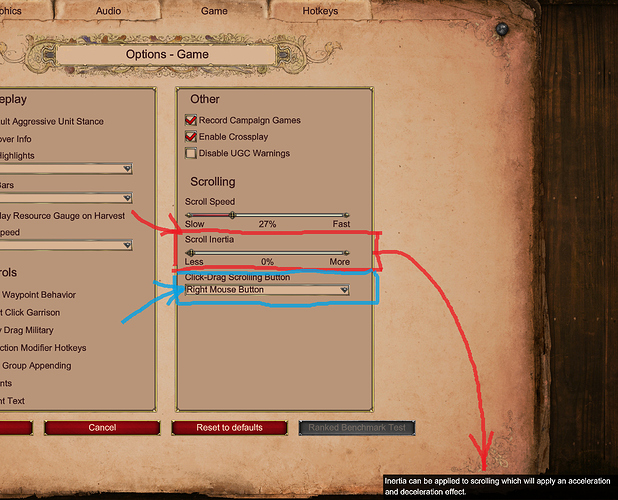 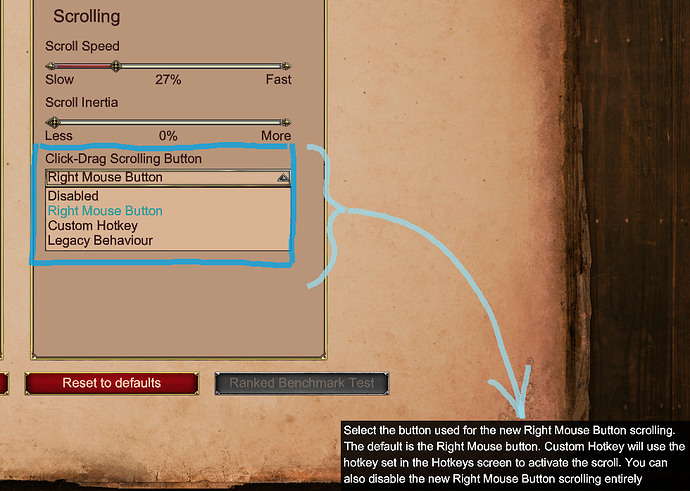 Depending on how far away you drag your mouse, the camera moves fast or slow

Sorry, this is precisely NOT what I want, I want the legacy behavior which is static speed and only go as far as the distance cursor traveled (instead of continuously moving like the default). But, as OP said, currently it isn’t possible to have both “legacy behavior” and “custom hotkey”. So you’re stuck with left-button, and you can’t pan/move your camera while moving your units.

Here someone on Reddit talking about this, with an example about how “click-and-drag” panning works as you’d usually see in every other application.

Ahhh, that video clarifies a lot. Now when I re-read the OP and your post, it makes much more sense now. Thanks! That could be cool functionality if implemented. Maybe with middle-mouse button. I’m assuming some might want to use spacebar as hotkey for it, too

I’ve thought of this thread a few times over the months, as I’ve tried to click-drag the AoE map and it not act the way described above. Subconsciously, it’s what I’ve wanted/expected it to do.

I think it would be great to have this method for moving the map around. So much easier and better, imo, than the current click-drag inertia method in the game. 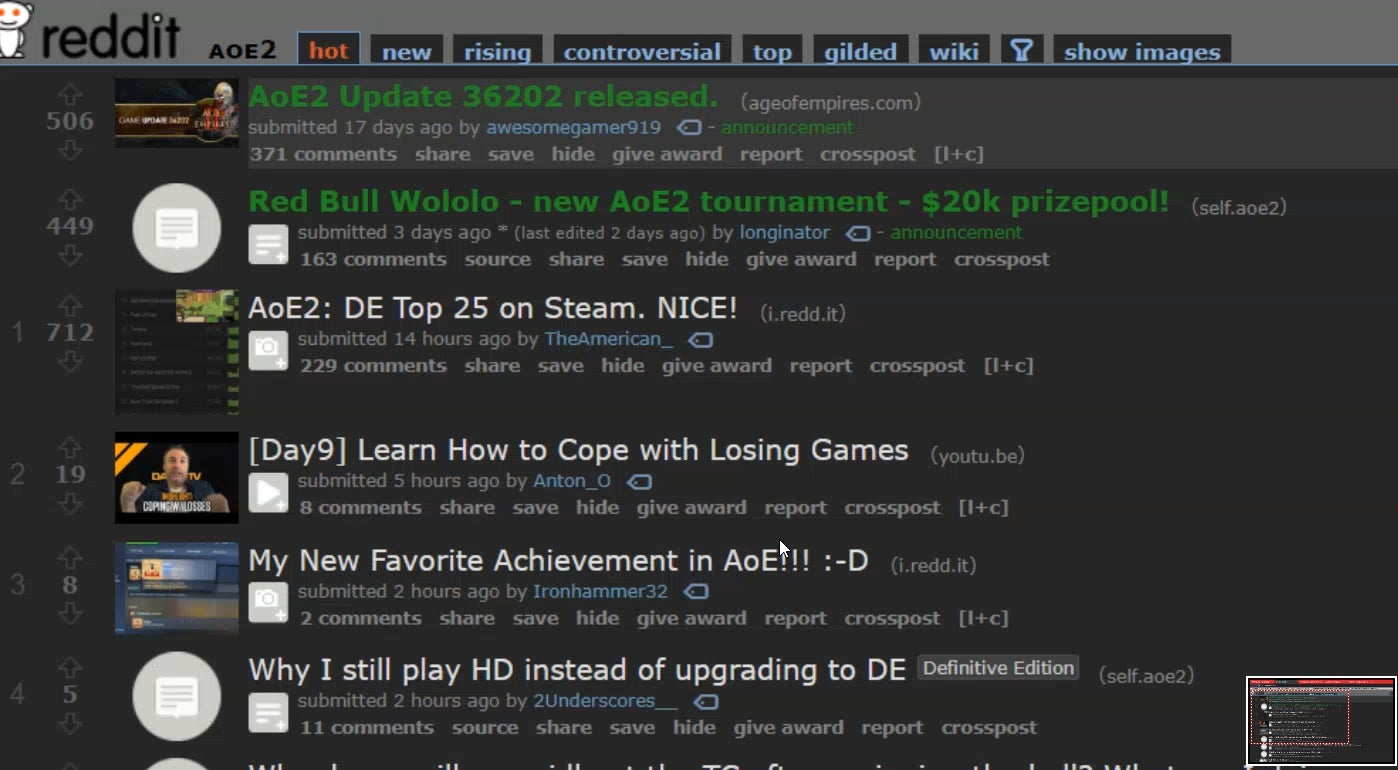 If map-moving worked like this and assignable as middle-mouse button or spacebar, I think I’d use it a lot more. I never use the current feature.

Whenever this issue comes up, let’s not forget who brought us here. Let’s make a toast to Adam Isgreen for his amazing contribution to the game, his now defaulted and “must have” accelerated drag-scoll behavior that we all love and definitely use all the time. Such a great addition to our game. Sometimes on random occasions in the day I open up aoe, hold that right mouse button and just accelerate like weeeeeeeeeeeeeeeeeeee.

Doing an obligatory once-per-year bump on this thread in hopes it can someday be implemented. Maybe in Dawn of the Dukes?

Basically, be able to right-click your viewport and move your mouse to drag the view precisely. See my last post for quick video demo.

I think the thread and comments might be a little confusing and so never got much traction/popularity. But I’d have to think many people would want this option and just don’t realize it yet, or were unclear on what the idea was

The default is unusable and only kept by people that don’t use the feature and haven’t turned it off yet, you sometimes see the cross cursor when they missclick and drag. Survivalist has this for example.

I always used legacy however during crucial situations I would occasionally misclick a drag select which causes the screen to shoot away, this is why I now disabled it.

I wanted to try legacy in combination with a custom hotkey but sadly this is not an option.

I just tried legacy to see what it was, and see it is similar to what was being asked for in this thread. Not the same, but in the same ballpark at least. Good to know. It’s pretty jittery (not smooth) to use, though, which isn’t good. And how it works isn’t to my liking. I’ll never use it, or any of the others ones

I noticed if you had villagers selected, the legacy one didn’t work. If this thread’s recommendation is ever implemented, I hope they make it so it’s not jittery when dragging the viewport around, and hope it still works if you have stuff selected. ‘Right click-and-drag’ (to try and move the viewport around) isn’t the same as ‘right-click’ (to move your selected units)… so the two aren’t mutually exclusive as the legacy one seems to think.

Even so, having the new one be work with right-mouse button drag, or middle-mouse button drag, would be fine for me. Basically, one of those as a default, but customizable as to what you want to use (button 4, 5, or 6+ on mouse, for example)

With legacy, it seems like they’re 90% there with what would be needed for this new drag scrolling idea

What we are asking for is basically a fifth option in that DropDown: “Legacy Behaviour using Custom Hotkey”.

I will try that next time I’m in front of PC, but if it behaves pretty much like the legacy (without hotkey) one, I don’t think that’s quite what the demo video above portrays. I could be wrong, but in my quick test, something about the legacy one seemed close but slightly different