Their Elephant Archers are so slow that a small group of Skirmishers with micro 2-3 shot them without any loss. Medical Corps is laughable: It takes 10 minutes to fully heal an Elephant.
On the other hand Bengalis have Husbandry and take less bonus damage from Skirmishers, so they are viable.

Dravidians lose to any Skirmisher+Knight+Mangonel push because

Crossbows as Dravidians never work because your opponent can freely spam Skirmishers. If you add Skirmishers yourself, the enemy adds Knights and you are dead.

You can argue some civs don’t have Knights but Dravidians have no counters to Eagles/Ghilman: 2 Monks and the already lackluster Battle Elephants are dead. Longswords are not viable if you have Scorpions or a few leftover Archers from Feudal.

My suggestions:
Give them Knights
Give them Husbandry (EA is just trash without it)
Double Medical Corps’ effect
Remove Cavalry from Wootz Steel (to keep their Cavalry very weak in the lategame.)

btw I think since Bombard cannon change Dravidians are now kinda ok on Arena, if you manage to get elephant archer + ignoring armor halb and bombard cannon with trebs then is quite hard to fight vs Dravidians.

Dravidians are decent in the lategame, but you never get there in open maps.

Just a reminder, arena is a niche map. Just because it appears fairly regularly in tournies, and some vocals defend its existence, doesn’t mean its even remotely common.

Do we really care if drav is “kinda ok” on a niche map? I’m glad Italians, Turks and port were buffed long ago even though they were actually really good on specific niche maps.

As a team game player I don’t see your statement valid. Aoepulse only have solo play data which do not include any team game stuff 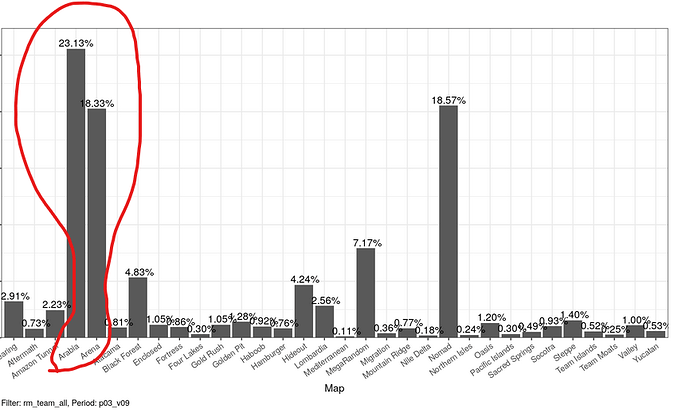 Would be really cool actually if devs just did this.
Really interested to see how much just the addition of knights even with missing so many upgrades can change the perfomance and gameplay of an entire civ.

Sometimes I wonder about just giving shrivamsha riders to the Dravidians and taking them from the Gurjaras. Then you could at least go Shrivmasha/Halb/BBC or something.

It would really change, game one:

I’ve been complaining for ages about Indian civs not getting knights, but people try to justify it because “muh balance”, even while complaning that Dravidians are underpowered.

I would want Dravidians to get elite BE and cheap BE bonus because I think this is more suitable for Dravidians than Malays. The theme of Dravidian civilization is relatively more elephant-focused. Malays could get a new BE bonus like training faster as compensation, but honestly they would be still a good civilization even without compensation.

giving shrivamsha riders to the Dravidians

The term shrivamsha has a very specific Rajput historical context.

but people try to justify it

These civilizations are designed that way. Just like you wouldn’t think giving the Aztecs, Mayans, and Incas Stable is an acceptable approach to balance.

These civilizations are designed that way

That’s a bad design choice. The developers just saw AoE3 Indians get camels but not horses (which also makes no sense) and thought they could mimic that by at least removing Knights.

Removing Knights for these civs and only these civs doesn’t do anything in the way of balance other than forcing the developers to give them something else instead, which to Dravidians they gave nothing.

Well, “returning” Knights should be the last resort when the dev decide to make no knights the main theme of South Asian civs, because that would mean abandoning this major premise. If the Dravidians have Knights, then Gurjaras, Hindustanis, and maybe even Bengalis sould have Knights too.

Giving knights is the worst way to go before all attempts are made. Let’s think other ways first to improve the civ.

If the Dravidians have Knights, then Gurjaras, Hindustanis, and maybe even Bengalis sould have Knights too.

Yeah, that’s my point. There’s no good reason, balance or otherwise, for the Indian civs not to have them. Native Americans don’t have stables because they didn’t have horses (at first anyway), and Chinese don’t have gunpowder units because they’re already good at too many different things, but I can’t see any reason for the lack of Knights specifically other than taking after AoE3’s Indians.

And talking about AoE3’s inaccuracies, the Portuguese never used organ guns (which were originally meant to be Italian UUs, but organ guns aren’t exclusive to Italians either. They should be generic units.)

I’d like to see some tweaking of the medical corps numbers and a decrease in urumi train time. Urumi is a cool unit, but it takes way too long to get going, and I’m not really sure it adds anything to the civ that it didn’t already have with Champion. Medical corps doesn’t do anything. Add an extra 10 HP per min maybe.

Most other infantry UUs have had to have their train time cut over the years. Teutonic knight, jaguar, samurai have all gotten this treatment.

Malays could get a new BE bonus like training faster as compensation, but honestly they would be still a good civilization even without compensation.

They are bottom 5 Arabia civ with 41% win rate.

I also wanted a discount on all elephants for Dravidians.

That’s a bad design choice. The developers just saw AoE3 Indians get camels but not horses (which also makes no sense) and thought they could mimic that by at least removing Knights.

I’d like to see some tweaking of the medical corps numbers. Add an extra 10 HP per min maybe.

How about add extra 20 base HP. So a essentially late Bloodlines with regeneration only for elephants.

Give them Husbandry (EA is just trash without it)

Husbandry is a must. Not just for EAs, but their siege eles are actually kinda bad as well (slow, no BL, no last armor, no Siege Engineers).

Remove Cavalry from Wootz Steel (to keep their Cavalry very weak in the lategame.)

Is this really necessary though? Are knights without BL, armor (I’m assuming without cavalier upgrade), or the light cav that ignore armor OP in Imp, or even good? While I don’t necessarily think Wootz should affect cav, I don’t think giving them a couple castle age buffs warrants the removal of the Wootz effect, at least from a balance perspective. And there’s still their useless BEs to contend with.

I like the challenge of trying to make a non-meso civ viable without knights or camels, but I think the devs needed to be more creative about that. I think the OP ideas are decent and functional, but here are my ideas to try and make Dravs better without giving them knight, in order of preference:

-Light cav line +X vs siege (maybe 4-6). Their light cav will still be squishy but will have knight-like DPS vs. siege.
OR
-Free Husbandry and/or Bloodlines. Makes EAs more viable and light cav more able to snipe siege. Bloodlines might have to come in castle to prevent them from becoming a scout rush civ.
OR,
Make Wootz a Castle Age tech. Same effect on infantry, but it gives stable units a large bonus vs siege (6-9) instead of armor-ignore.

Others have argued for Urumi to occupy more of an anti-siege/raiding unit, which I think has some merit, although I prefer the greater accessibility of having some kind of improved stable unit for that.

While it won’t be possible to get a more detailed breakdown until the official API and various fansites are fully up and running again, the above is a start. They have a lot of underrated bonuses/potential, and like all civs they aren’t meant to be overpowered so they of course will have weaknesses; which helps differentiate the civs as well.

To mention some weaknesses, Dravidians are:

To mention some strengths, Dravidians have:

Being the least mobile civ in the game, they will definitely play differently than others but in my experience they have plenty of options to make up for that weakness when used effectively.

Make Wootz a Castle Age tech. Same effect on infantry, but it gives stable units a large bonus vs siege (6-9) instead of armor-ignore.

Why not give anti-siege attack to infantry as well?

I personally think they need more bonus for infantry early stage of the game instead of armor ignoring effect in the late imp.

Top-tier infantry once Wootz Steel is researched. Armor-ignoring damage translates to infantry doing +1…+13 damage depending on units and upgrades; by comparison the Aztec and Burmese bonuses are much smaller.

Before Wootz Steel, 50% cheaper Barrack upgrades is very strong. It saves 50f 20g from MAA upgrades, 105f 45g from Pikeman upgrade, 50f from Squires, 150f 300g from Halberdier upgrade. With 200w per age and 25% faster attacking Skirmisher and Elephant Archer, you can play Dravidians like Ethiopians and it is pretty strong opening. Ethiopians also rarely use Knight. It isn’t big problem.