Perhaps a campaign based on Songhai, successor of Mali? The story of Sonni Ali’s rise would make for a good African campaign.

An campaign about unification of Japan would be nice.

I can’t figure out how to install these mods.
They don’t appear in the in-game mod list under campaigns, and subscribing to them on the aoe website doesn’t appear to do anything.

I only see 16 mods available when I search mods for campaigns, none of which are these

when I looked for them, i found them in the all mods list. kind of a pain to go through the huge list, but these are worth it!

Hey Philly or Filthy, i’m just informing you that i can see none of your campaigns in the mod menu. Also a 9th campaign i would like to see is the Polish-Lithuanian vs Teutonic Order war or some more in depth Crusades (Middle East or European)

In ther Journey to the West scenario I am totally stumped as to how to get past the river, I got 3 villagers and 3 fishing traps. If I have them cut down the nearby bamboo they get 3 wood each which they can’t put anywehre.

What am I missing here? I feel dumb

Without totally giving away the solution, what happens when you cancel a building under construction?

Hmmm… so I should have done something before I had them finish building the fish traps?

Unfortunately my only save is after I built them, lol

I start from the beginning tommorow and hopefully be more intelligent about my puzzle-solving.

Too bad! Yeah this was a tricky puzzle, but I wanted to give a challenge! Some of the puzzles are more timing based, but this one involves thinking a bit outside of the box regarding the game’s mechanics. Hope you’re enjoying the scenario so far!

Great news! My latest scenario Komnenos - The Byzantine Restoration is out now!

If you liked the hybrid fixed force/build & destroy gameplay in Finehair or Seljuk, you’ll love this one! But instead of playing as raiding barbarians, you’re commanding the Legionaries, Cataphracts, and Varangians of the Byzantine Empire in the years following their crushing defeat at Manzikert. 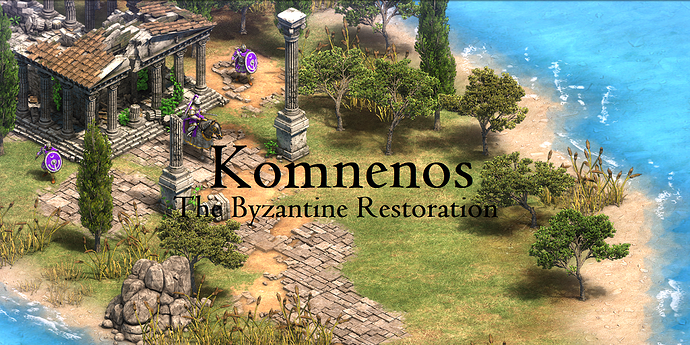 Can a dying empire be saved?

The Roman Empire is collapsing, plagued by internal power struggles, rebellions, and foreign invasions. As Alexios Komnenos, seize the throne from a failed emperor, fight the Turks and Normans to expand your realm, and fend off pretenders and rebels with their own aspirations for your crown.

there was a campaign on the unification of japan in the the original AOE2 Conquerors expansion: https://ageofempires.fandom.com/wiki/Kyoto, but another completely different scenario on the same subject would be nice though

Also, a campaign that has to do with king arthur and the knights of the round table would be nice, seeing we have the medieval themes and all …

Oh my, I was eagerly anticipating your 3rd party content coming to DE! Just finished your in-game campaigns and enjoyed them a lot! Thanks a bunch, I am going to get my hands on them ASAP! I haven’t checked them out yet, but if you would like my suggestion: I would love a chance to get proper payback with a campaign featuring the Britons, so we can eradicate some AI by having fully upgraded Longbowmen with Warwulf trebuchets of our own! Payback for all those times they out-micro’d our canon balls, ghehehe.

Still that is not in a campaign. The bulgarians helped the Byzantines at Constantinople, at 718 AD and STOPPED a major attack of the Muslim Saracens Arabs, thus preventing an Arab invasion of Southeastern Europe for 700 years. That battle was equal in the meaning to the win of Charles Martel at Tours in 732 AD( also called the Battle of Poitiers ) where the Franks stopped the Muslim Arabs attack. But at Constantinople, 718 AD, the Arabs used 200 000 troops and 5000 ships. While at Tour, 732 AD, the Arabs used only 80 000 troops.
At 1204 AD, the Bulgarian king defeated western knights who conquered Byzantium , the few months before that battle.These are only for Historical battles.
I campaign may be done for a Bulgarian king Boris 1. He converted the Bulgarians from Paganism to Christianity. Also Boris 1 adopted of the Cyrillic alphabet, developed in the Bulgarian capital Preslav. Later the Cyrillic alphabet become an alphabet for many Slavs people- Serbs, Russians, Ukrainian, Croatian, Monte- negro, Belarusians. Boris 1 and his son- Simeon the Great, also ruled over very large land during the First Bulgarian Empire, making it the most powerful state in contemporary Eastern and Southeast Europe.

So I thought I’d give a few suggestions for your next campaign:

Alfred the Great, the King of Wssex who united the Anglo Saxons and fought back the Viking invaders, effectively the first true King of England.

Isabella I of Castile, who saw the end of the Spanish Reconquista with the reconquest of Grenada, it was also during her reign that Columbus disocovered America.

Amazing! Does hitting the “subscribe” button, for each of the campaign’s, automatically install them correctly?

I’ve played and finished the Komnenos and Selcuk campaigns. They were of very high quality and I’ve enjoyed my hours in

Noticed a bug: when Tongrul succeeds his missions, he gets +770 attack. A bit much

Also in the Selcuk mission: I spent my wood upgrading a unit in the big pagoda, thus having not enough to build a mill / woodcutters camp. Maybe the techs in the big pagoda should unlock later or cost only food/gold?

Does hitting the “subscribe” button, for each of the campaign’s, automatically install them correctly?

Yes, I did it from ingame mod manager and it did worked for me.

I’m playing through some of the missions now. In Valhalla’s Edge I unfortunately encountered a bug. The bears in Antarctica have all only 3 hp after loading a saved game.

In the Finehair campaign, one of the heroes, Rognvald Eysteinsson, damages friendly units. I have Druzhina researched, so maybe that’s the one causing it. He actually packs quite a punch.

Man, you must have put the best easter egg in that scenario that I have ever found in AoE2. AoK and The Lost Vikings have to be the two games that got me hooked on gaming, back in the day. Now they are finally united. Superb

Can I share these campaigns to Taiwanese AOE forum? They look awesome! If you allow, maybe somebody there would help to translate the campaigns into Traditional/Simple Chinese, even Japanese probably.

As an Asian player, I look forward to some Asian campaigns about Battle of Baekgang, Battle of Talas, An-Lushan-Rebellion, Yue Fei’s northern expedition, Mongol invasions of Japan, Zheng He’s voyages and Naresuan the Great, etc, which are really close to our community.

So sad to learn that DE won’t add new civs, there are many great civs like Jurchens, Tanguts, Khitans, Tibetans, Uyghurs, Siamese, Polish(Western Slavs, instead of E.Slavs as existing Slavs and S.Slavs as Bulgarian), Swiss ,Bantu and Nubian.

Without those civs, so many wonderful battles in East asia cannot be made. It’s an absolutely mistake to replace them with Chinese, Khmer, Slavs, Celts, Malian and Ethiopian in current campaigns, and let some Asian players feel that the official team doesn’t seems to be interested in civs which are not American and European, especially the history of Far East.

Aethelstan may be a better pick than Alfred - he was the first actual king of England, and he fought a greater variety of opponents; not just vikings, but also the Irish, the Cumbrians, the Scots, the Welsh and other Saxons. His campaign would probably provide more variety.