Ethiopians are over nerffed, I have some suggestions to fix them

Oromo Warriors are the most uselessness troops in game. I think this is the best way to buff them and fix Ethiopians’ problems,

Ethiopians have no good regular melee cav to defend fire throwers, Huaraca, Grenadier and artillery.
Oromo Warriors are supposed to be act as Hussar and Rifle Rider , but they are not.

They are overprice and pop inefficiency, they should get some special multipliers like x4 vs siege units and x4 vs Artillery. Ethiopians can’t count on age5 Mameluke as Palaces are too easy to put down by Grenadiers unit.

Buffing Oromo Warriors will not break the game balance as we already have Rifle Rider, Oprichnik, Yabusame in game.

They are a fortress age unit. I think the issue was that Ethiopia commerce age rush was too strong.

The problem with Oromos is that from range they don’t really counter anything that heavy cavalry is supposed to. Their RoF is 4 at max range and everything heavy cavalry counters has ranged resistance so their damage output at range is less than 30% of what they can do in melee. Against anything other than heavy infantry you’ll want them in melee mode and it’s quite tedious to constantly switch them over. Even in melee, I’m not sure if they’re strong enough to justify the cost.

To make them useful they need to scrap the variable rate of fire and make them more like Hakkapelits and Harquibusiers. Both those units have an AoE on their ranged attack which would be fitting for Oromos who fire a big old musket. They also need some ranged multipliers to actually make them counter the units they’re supposed to. A x1.5 ranged multiplier versus light infantry and artillery would be enough to make them useful. The British Firearms could also be changed to increase ranged AoE to give them even more power verses massed units.

oromo buff would be excellent, as above. I think Ethiopia is a really interesting civ, but impossible to currently take advantage of all the civ can offer

No! Ethiopia is still quite op. Now they can upgrade to age 2 before 4:20 thanks to the buff of the starting 300f cattle.

As they should be able to do. Their start was unreasonably slow and tedious before. They lost a starting cow to compensate so it’s actually an overall nerf.

And that is irrelevant to fixing a useless Fortress Age unit.

Ethiopia ? OP ? Are you stuck on the release date of the African DLC somehow ?

Not just ethiopia but also hausa were fine, not sure why they needed to mess with the african civs again. Heard that abuns are 2 pop now as well which sucks, mortar is almost unusable in the fortress age. 2 vills and an abun was fine, didn’t need 4 vills removed and replaced with another 3v in age 1.

they still have 2 vills + 1 abun. It’s Hausa that has the new 3 vill shipment

You do know that they are tagged like the hakkapelits and Harq right? they are not tagged as light range cav.

age3 facing 2 falcons from shipment, protected by musketeers, what can you do?

my method is abandon the fb, let the palace and war camps gain some time

rebuild palace, war camp in the base, research “Imported Cannons” for 300 Influence, produce 2 culverins for 1000 Influence.

is Ethiopians OP? No.

You do know that they are tagged like the hakkapelits and Harq right? they are not tagged as light range cav.

How on Earth did you get the impression I think that they are light cavalry? I clearly said they are heavy cavalry and they should be more like Hakkapelits and Harquibusiers.

The problem is that they are not dps machines in any way shape or form. Their melee attack is decent but not good enough for the massive expense. They are also in ranged mode by default which is absolutely abysmal. Compared to their melee attack, their ranged attack damage output is ~28% versus skirms, ~19% vs heavy infantry, and ~9% versus artillery (you can try to micro them to get closer but even if you get the optimal 1.5 RoF, the melee attack is better in basically every scenario). Their only similarity to Cuirassiers is cost, but they lack a Thoroughbreds card to make them affordable.

The most comparable unit would be Harquibusiers and they have ~300% more dps for a 10% higher cost and about 20% less health. Although to be fair, Harquibusiers look like an extremely overpowered unit. 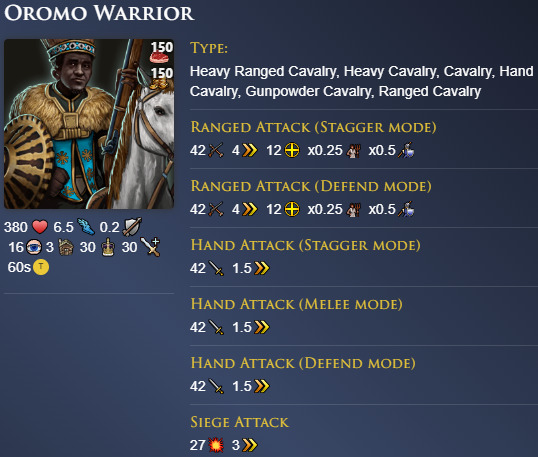 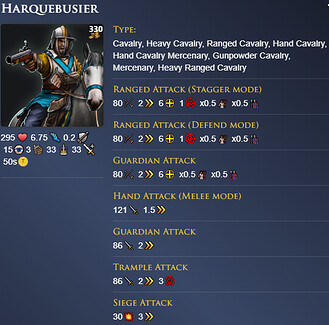 Swedes and British have strong Hussar, their Harquebusiers, Hakkapelit are for fun, but Ethiopians not.

Oromo Warrior ROF 4.0 (1.5 against targets in a range of 2), who will use them at range of 2 without turn to melee mode? they have Multipliers ×0.5 vs. all Heavy Infantry with ranged attack.

Buff Oromo is ok, they are weak units. But African civs have monster unit javelin rider, they still need to be nerfed.

African javelin rider is a monster unit with unreasonable hitpoint and melee attack, even age 2 Dutch skirmisher can’t beat it in 1v1 combat. [jr] [s] Skirmisher needs 10 shots to kill a javelin rider in 30 seconds, while javelin rider only needs 18 shots in 27 seconds, and the situation gets even worse in melee combat. [ca] [k] Compared with cavalry archer and keshik, we know that the melee attack of javelin rider is insane (same value with ranged attack and get 4.5x against hand cavalry,…

It’s not a monster unit, and it serves a completely different role from Oromos. Javelin riders need at most a mild nerf of -1 range and maybe 5-10 less health.

not MONSTER recently after those nerfs, just like Soldado, Forest Prowlers, which are sightly better than the others

Why is it that when I make javelin riders they are literal trash? I can’t even kill hussars with them where are you guys getting these monster javs from?

A card like Thoroughbreds for Oromo Warriors would be really nice. They could do with another card for a hitpoint boost too, in my opinion, to justify their cost. Otherwise, keeping their cost and hitpoints the same, increasing their RoF to a flat 2 might make them more useful. I think the Desert Raiders are supposed to cover the lighter melee cavalry side for Ethiopia (Shotels just don’t seem that useful) as they compare well with Uhlans with Shiftas and Loyal Warriors, though they do take at least Shiftas before they become viable at all.

But unlike the harq they dont have to get to 6 range to actually fire off their attack and range is pretty good for micro in combat, they have the same range as normal goons meaning they are deadly in kiting situations with the higher base attacks - and if someone tries to charge them, that also reduces their ROF, so its not an easy task

also while that is their base stat, they are only available in age 3 so they get free +15% shadow tech and another +10% from the elite upgrade, like this is the stat you can easy get them for

To put that into perspective, comparing it to dragoons (which has the same range) they deal more damage per pop in one volley against all other units except cav, art and heavy infantry

I think its a pretty strong and heavily rewards micro

Another thing I just realised is that they are effectively china’s forbidden army all roled into 1 unit, you get no dps loss from charging and pathing like with normal heavy cav and you can kite and run away just as easily

Easily underestimated unit, in addition also forgot about all the other techs they could get like the port tech for extra attack for the sudan tech for melee armour, meaning they can charge in even more easily