we may want to look back someday and see maps (snapshots in time) we played with loved ones… since, well, you never know :-/

Are you trying to guilt-trip the devs or something? This is a very weird argument. I’m all for this feature, but your comment is just. It doesn’t feel right to me

I do like these screenshot of the entire map. See some interesting things, like the enemy’s base.

Are you trying to guilt-trip the devs or something? This is a very weird argument. I’m all for this feature, but your comment is just. It doesn’t feel right to me

No, not trying to guilt-trip. But it is an angle they maybe aren’t aware of or didn’t consider since it’s atypical; yet it’s a very valid one for some people. Especially for sentimental/nostalgic people like me. I made the same argument years ago elsewhere – probably well before AoE2:DE was even dreamt of – for this screenshot feature and to let us load old saved multiplayer games when other player(s) aren’t present to join in (and load old replays)… possibly without being quite as blunt with ‘why’ I wanted it done because I hoped they’d read between the lines and understand… and that didn’t do much good or they didn’t see it. Now that there’s a pandemic going on, and it’s years after my initial request (i.e., nobody gets any younger), it’s even more on my mind.

I have saved SP and Multiplayer games and replays from long ago (including CD-ROM / MS Gaming Zone-era, and Forgotten Empires when it was free ~10 years ago) with special people in my life, that I’ll never get to view again if no mechanism is ever put in place for me to view them. If I knew there was a “Screenshot Entire Map” feature back then – and knew games wouldn’t be viewable months and years later – I would have at least captured a bunch of full-scale screenshots; which would’ve helped a little. Instead, all those games are completely lost in time. If the franchise continues with no ability to screenshot the entire map and old saves keep getting broken due to patches, it’s just history repeating itself. 20 years from now, instead of two decades lost in time, it’ll be four. A definitive edition would do well to bring back the ability that was once there in an older version; especially now as hard drive space has gotten pretty plentiful, on average. (As well as create game-load tools that let us open old saves and replays, without the other players having to join.)

I really don’t have strong views on this issue either way. But I think it’s your comment which is weird. Do you honestly think the developers are old grannies that are being guilt tripped by their grandkids (players)? You are strange.

Didn’t know such a thing existed, but i am with you guys, this feature would be really cool to have on DE!

Agree, would be awesome, a neat way to remember games with friends! And to have the scores and timeline and post-game details attached below the image would be neat!

Good idea! Some statistical data would be great to have alongside

bsolutely awesome feature about the original games used by quite a few people! The above bug report and example of a full map screenshot are very helpful to re-creating this.

I greatly hope you will include it in

please bring it back!

Why did the devs decide to take out this feature?!

Why is irrelevant. Let’s just be nice to devs and product managers, and convincing so they can change their minds and make it happen.

because it no longer worked properly with the new terrain rending system.

Cysion replied in an AoE Zone interview about this request:

Why are full-map screenshots not possible in DE? Is it difficult to add? It is quite important if you want to show your custom maps.

“In the original game, the full-map screenshots were a crafty hack, implemented by Matt Pritchard to allow full map captures for their marketing team. The way the updated renderer works, this is no longer supported and quite a bit of work would be required to bring this feature back. It’s certainly possible, but we’ll have to weigh that up against other features.”

Cysion says, "…It’s certainly possible, but we’ll have to weigh that up against other features.”

They should put 5 items in a community poll, “What do you want addressed soon/next?” and put this screenshot item as one of the five items, with a proper/explanatory description so people can make an informed decision. (Just putting, “Screenshot entire map” with no other info as the item will clearly not garner many votes. Have benefits and examples… text and visual). They could plan to work on the top 3 from the poll. Let the community decide if this should be a priority or not; let us weigh it up against other features.

We all know the devs work on several things in patches, not just game-breaking bugs.

Not disagreeing with your point, but the teams are different.

Making this a tougher job

With Capture Age partnership, would it really be that difficult, though, I wonder? The tech is already there: 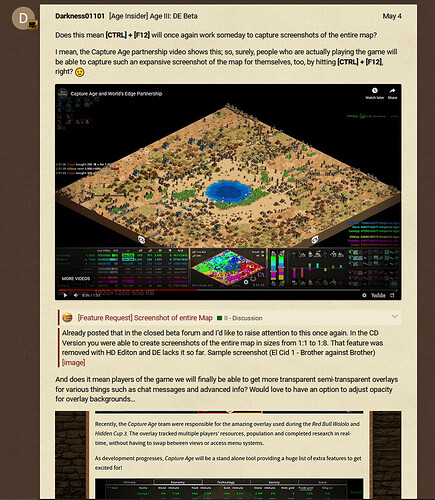 If such Capture Age-powered screenshots would not allow for zoom-ins that retain their image quality, then release the feature in multiple releases over time.

I’d rather have this phased approach and have some way to do some semblance of a CTRL+F12 screenshot soon, rather than wait year(s) for some huge CTRL+F12 project to be completed way down the road, if ever – because doing so is, “quite a bit of work.” If Phase 1 is fairly easy, relatively speaking, then that would definitely satisfy my screenshot need/desire for a quite a while.

Just letting folks know in this thread, and those who search for and find it, that the new Capture Age for AoE2:DE gives a roundabout way for us to take a full-map screenshot.

It’s not ideal, as it’s not nearly as simple as just hitting CTRL + F12 from the actual game, but at least it’s a way. You can see my post three posts below the above post I linked to that I was able to capture a full-map screenshot from Capture Age

I’ve download Capture Age, so if I want to have a screenshot of the entire map, all I have to do is to open Capture Age, connect to the game, and press CTRL+F12? 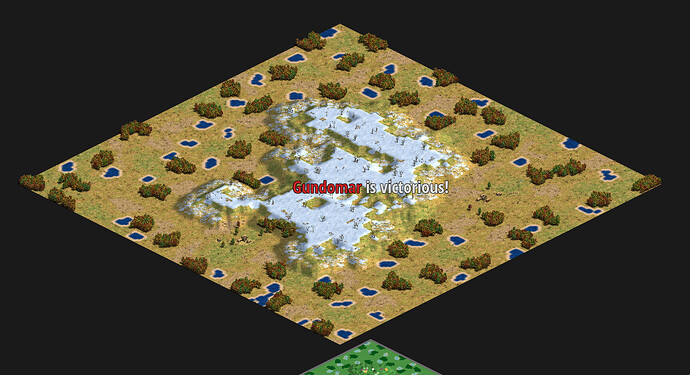