Already posted that in the closed beta forum and I’d like to raise attention to this once again.

In the CD Version you were able to create screenshots of the entire map in sizes from 1:1 to 1:8. That feature was removed with HD Editon and DE lacks it so far. 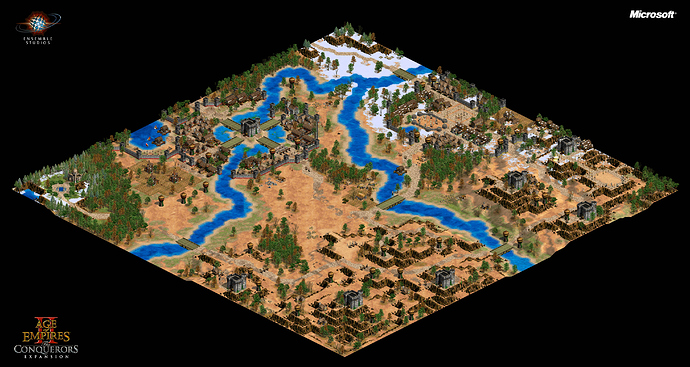 This is such a desirable feature. I can’t wait until they fix it, assuming they do. I’ve wanted this for years and years. Didn’t know the functionality was even possible before until I heard about it in the beta

CTRL + F12 hasn’t worked for a long time. Was removed in AoE2:HD. What possible reason could there have been to remove it? At this time, I have to believe the feature was accidentally removed, deactivated, or deleted… or some newer construct of code accidentally blocked or conflicted with the capability – thus, a bug. Re-implementing it has either been low priority or tough to do, or the issue got forgotten. Either way, I’m submitting it as a bug since the capability was removed from the game for seemingly no good reason and it’s still not back, and I don’t see a bug report.

Hey there, devs and who-ever else might read this. I’m tossing this topic a gentle bump (hopefully it works like this!) as this was an absolutely awesome feature about the original games used by quite a few people! The above bug report and example of a full map screenshot are very helpful to re-creating this.

I greatly hope you will include it in DE some day, as you’ve already done a great job with the game and seem to often listen to community input.

Did the old way also let you capture all the details, such as where all the unit are, as well as player names, scores, and age they are in? Could you use this feature mid-game, or did it on ly work at end? If not, and if it only worked at the end, the DE version should have those, imo.

It worked at any time and captured your POV. Unexplored parts of the map remained black. Screenshots were possible from 1:1 to 1:8 and showed the map without extra information like playernames and civs.

Sounds awesome! With added detail of player names and scores, would be awesomer!

I also support the addition of this feature. I used it on the campaigns on the CD version to see the scenario in all its glory.

Screenshots were possible from 1:1 to 1:8 and showed the map without extra information like playernames and civs.

FYI the 1:1 resolution is a UserPatch feature. The original game still had complete map screenshots, but they were more limited in their resolution (I believe 1:4 was the highest resolution, and UP added 1:1 and 1:2).

Oh, you’re right! I just my CD Version and the highest resolution was 1:3

+1 much needed! Especially for scenario mods

Does this mean [CTRL] + [F12] will once again work someday to capture screenshots of the entire map? I mean, the Capture Age partnership video shows this; so, surely, people who are actually playing the game will be able to capture such an expansive screenshot of the map for themselves, too, by hitting [CTRL] + [F12], right?

Devs please give us this feature back even if only like 1:4 ratio is possible.

There may only be a 1:5 chance this feature is ever brought back

I support this idea.

Plus one for the feature

So it didnt make it into the latest patch, then? Is too bad if not

I for one, also highly support this feature being added.
I am unsure of how the original feature worked; so I am uncertain of the work required to implement. However, I believe that a large number of individuals would take advantage of this, especially in posting screenshots to the steam community forums, as well as other social mediums (which is only free good publicity for the game!). Imagine how beautiful these full map prints would look with the new DE graphics!

In the CD Version you were able to create screenshots of the entire map in sizes from 1:1 to 1:8. That feature was removed with HD Editon and DE lacks it so far.

would love this feature to be added again!

I can’t think of any good reasons why this feature shouldn’t be implemented, or how it could possibly be incredibly complex or time-consuming to create/implement. Meanwhile, we continue to play match after match after match with no decent way to capture the map for nostalgic reasons, sentimental reasons, posterity, or fun. This would be such a nice thing to incorporate sooner rather than later. With COVID taking lives, too, we may want to look back someday and see maps (snapshots in time) we played with loved ones… since, well, you never know :-/