Actually I want to create a new mod for DE, vegan mod, since I can’t find it in mod list yet.
However, it seems nowhere to get a tutorial on creating a new mod anywhere on the forum nor google, as of today.

I’m expecting creating this mod is just to remove all the meat animals off the map including sheep, turkey, goose, buffalo, boar, the 0 meat animals can stay.

It’s because my father is a vegan and he really doesn’t kill the animals for food, so he has to go for forage, then lumber for farms in dark age, which is a huge handicap to him.

So I’m thinking of creating a vegan mod for him to play together against AI so everyone is fair, but I can’t seem to create a mod.

I don’t mind you’re reading this is willing to create a mod like this, full credits to you. Hopefully it doesn’t trouble you too much!

P.s. If the mod only works on one map type, please make it on Black Forest. You can do it for all maps if it works the same, other players can use the mod and be a vegan too! ^^

It’s a pretty big job, it changes the balance of the game a lot and excludes him from a lot of multiplayer options. At that point it would almost be easier to change the graphics of all animals into human enemies standing around carrying fruit baskets.

I understand the request, it’s just not really what the game was designed for.

What is quite doable is to make a map with no huntable animals, or where all the animals have 0 meat in them. ie. someone like me could edit make a vegan Black Forest map script. Maybe with a bunch of extra berries.

yeah this will be good enough, don’t have to redo from scratch

Bro, like I said, if I can do it myself, I won’t request.

Yeah that’s a good idea, lemon trees, olive trees, apple trees, vineyards, but if want it to be more realistic, can make it to be like farms since it’s a plantation. And wild berries bushes, forage bushes, are perishables.

Does your dad understand the difference between real animals and pixels on a screen?

How does he not have any moral qualms about killing villagers and razing houses and buildings and killing old scholarly men (monks) and other animals such as horses and camels and elephants?

Why does a person asking for a valid and harmless modification to their experience with the game upsets you so much, to the point that you engage on nonsensical questioning about their morality??

If you don’t have something to add to the discussion simply ignore it.

Well, I didn’t want to deviate the topic off of vegan mod because vegan mod is more acceptable by people in this world.

Since you asked, (below is a bit off topic, just to reply to this guy)

Blockquote
My father even asked if it’s possible to upgrade the villagers to become soldiers to go for war when they’re not needed so much on resources than killing them,
or downgrade soldiers into villagers when you need more resources than soldiers than sending troops to die to free up population count,
or be able to convert all buildings to yours like you conquered the base after you destroyed all their TCs than have to destroy the remaining houses, markets, universities, barracks, stables into ruins to build new ones, and let the surrendered enemies to join your forces than to kill all of them (they rather die than joining you).

So to ease things off, vegan mod

First of all I am not upset so quit being so presumptuous. I am well within my right to point out somebody’s mental dissoance if I wish to do so. Its completely silly to have an issue with killing pixelated animals for food if you have no qualms about killing pixelated animals for war. Who knows maybe the person in question didn’t realise this and come to their senses if somebody points out the obvious flaws in their logic. So I am contributing more usefull points to this discussion than you are.

Not necessarily. Those animals were involved in the war by your enemy. The “sin”/mental burden is on them. It’s the difference between not eating puppies and not shooting a spree killer because he’s wearing a protective vest made of living puppies.

I’d also like to request keeping things civilized in here. This is a gaming forum, people come here to discuss gameplay. Discussing serious real world issues is not forbidden as far as I’m aware, but it’s probably best to keep the discussion agreeable to all parties involved and not immediately shoot for “suggest your father he should see a shrink because he totes cuckoo yo” (slightly paraphrased).

PryingIvy454910, if you wanna discuss about humanity, please take it elsewhere. This is a vegan mod request post. If you can do it, you’re more than welcome! Otherwise, please remain silent.

Can we have more introductions of special plants, vineyards and olive trees etc? I had this in my AOK:HD(2013) game with a mod but I don’t know how to add those here given the different resolution etc.

This was a fun little project, I have to say. Though, a lot more difficult than I had imagined.
It’s not as elegant as I had intended, but at least you should be able to play with your father against AI.

Replacing only graphics requires some slp(?) editing, something I have yet to look into.

I had tried to create a data mod that replaces all animals with other types of bushes (a “boar” bush would yield more fruit for instance), but the AI seems to crash the game when trying to “hunt” a bush which isn’t huntable (makes sense).
With proper AI, a data mod with different bushes, and adjusted civ boni, would be a more interesting way to play. Creating bushes that “regenerate” food is cool, as well.

Maybe I’ll add more random maps if I can figure out how to load custom “.inc” files. (Also, the maps are the classic ones, from the CD version, fyi.)

Please let me know if it worked for you and enjoy.

Thank you r3com! I can’t wait to give it a try!

I’ve subscribed, liked both the mods both on forum using your links and in-game, downloaded the mods in-game, but there’s an exclamation mark instead of a tick on the left of the mod though, it’s unable to be selected as if it can be downloaded but can’t be utilised in-game.

I went in to test single player against AI at Yucatan and Black Forest. Both still seeing boars and geese. Could you please check again?

Would be good if modders could work on new plant and crop options, maybe even kelp field for fishermen to harvest.

I see. I had the same error, but hadn’t noticed it. It worked for me because it loaded my local files instead.

For the map pack, if you click “check for updates” it should work now.
For the Sea Food Data Mod, I reuploaded it, which can now be found here https://www.ageofempires.com/mods/details/14451 named Vegan Sea Food.
Both mods no longer have the red ! on my end.

No idea what the issue was. The mods were actually downloaded, so the files were there…
I didn’t even make changes to the files when reuploading, lol.

For the Vegan Sea Food mod. I see Rice Farms as fish on water! Awesome work!

But animals can still be seen on Arabia, BF, Yucatan, I’ve only tried the three maps that you mentioned. Is the Meat to Veggies mod working?

Since you’re still in editing stage, possible to make the Rice Farms be more appealing? They look similar to wild grass like trees beside them it’s a bit indistinguishable.

The maps should be working. Are you selecting the ones from the custom tab? For instance instead of “Black Forest” it should be “Veg Black Forest”. 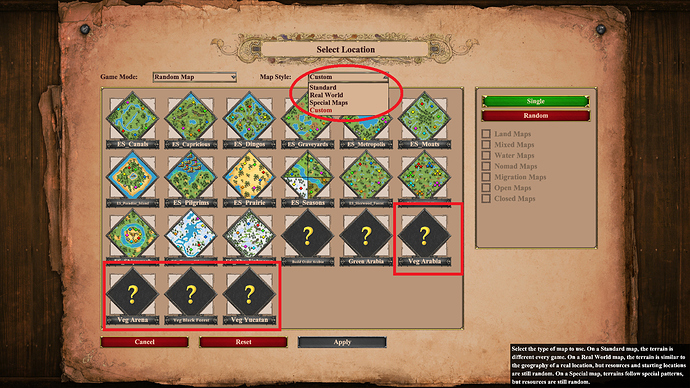 If you mean the shore fish, I could turn them into fruit bushes (red or yellow). Beyond that, I can’t find graphics that would be more fitting.

I just had another idea. The first prototype data mod I had made didn’t work, because the AI would crash when looking for deer, boar, sheep. But when playing Empire Wars (and starting in Feudal Age), it seems to work. So, if that would be an option for you, it’s called “Food to Fruit (Vegan) [Data Mod]” https://www.ageofempires.com/mods/details/14467/
The advantage here is that you should be able to play any map. Also, it offers different types of forage bushes, and also increased the work rate of foragers and adjusted civ bonuses of some civs to work with bushes instead of deer/boar/sheep.

I did test it on my end, so hopefully it works for you, too…