Game does not respond to keyboard and mouse input

So upon entering a ranked game today, I switched keyboard input method (from Chinese to English) and then the game does not respond to my key presses and clicks. This happened to me twice already in ranked games. And a lot of times in mod manager, all after I switched input language.

To reproduce this bug, try to type Chinese with Microsoft Pinyin in game (chat or mod manager, etc.). You will surely catch it with enough tries. 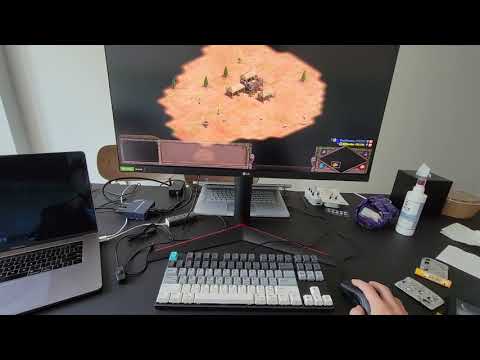 This bug probably existed since launch. But because it mainly affects players who need to switch input methods, it is not getting enough attention. I’m attaching another post from Chinese player community. You could easily understand it with Google translation.

Come on devs… This happens to me again today. Ranked game, insta resign… It’s a disaster if we forgot to switch input language before entering a game. @ChristheCo @StepS7578 @GMEvangelos

Is any dev taking care of this bug? @ChristheCo @LidaKor

Thank you for your report! Does this happen every time you try to type something with Microsoft Pinyin?
Does the issue only happen after switching input method while in game?

Thanks for looking into this!

Does this happen every time you try to type something with Microsoft Pinyin?

Not every time. But you will likely see it if you regularly do it. I had 3 freezes during last 2 months, even though typing pinyin seldom.

Does the issue only happen after switching input method while in game?

Many thanks for your reply. This problem has existed for a very long time and affects users who are using Chinese input methods (Pinyin / Bopomofo / Cangjie).

hi, i have got the same issue today, also using mandaring, german and englisk keybooard and switching while trying to build a town center (and trying to swtich to get the keybind to work) caused the input problem.

i made a bug report before seeing this one

Thanks for your report! We really need some priority for this bug @LidaKor

I have similar issue (no language change, just normal game start, happens rarely, but consistently). Keyboard works fine, but minimap and UI buttons are unclickable. Units and buildings can be selected and clicked, but menu, minimap, and buttons can’t be

I had that issue too, sometimes when viewing replays. Different than this one, but could be related.

I am sad, I could not reproduce your issue. However since many of you have reported it in different post we have created a ticket for further investigation.

Thanks. Could you give it a high priority? It’s been there for months. And if you force quit you might even be forbidden from the ranked queue temporarily.

I am a new user ,cant upload file.
Feel rather angry by this bug,so especial report the problem.

I have the same. Sometimes I accidentially trigger the language switch hotkey (shift+alt for me) and the game becomes completely unresponsive except for scrolling with the cursor. Keyboard and mouse button input dont work anymore.

@LidaKor I just had a game where this happened, Official Microsoft IME as well. Alt-Tabbed to reply to a steam message, changed to Chinese input, tabbed back to AOE and pressed hotkeys. The game didn’t receive inputs as Chinese typing was on, changed back to english and nothing worked after that; niether mouse clicks nor keyboard inputs. Just scrolling

Are you still having this issue recently?

Please refer to discussions in this topic: Losing game control when chatting with Chinese input method - #18 by XelNaga8080

Maybe you could merge them.