Using the new Civilization Builder website, I created a mod adding the Armenians and Georgians. I followed Spirit of the Law’s instructions and created two separate mods: one for the civilization data itself and one for the UI. I automatically subscribed to both. When I went into the standard game menu, my data pack did not show up, and neither did the civilizations. My game was never open during the entire process except at the end, to test if the mod worked. I don’t know what to do. Please help!

This may be a bit of a dumb question, but did you subscribe to the mods in-game or from the website? Sometimes if you do it from the aoe mods site it doesn’t actually download anything.

I will try unsubscribing and resubscribing in-game, then restarting the game and seeing what happens. Thanks!

Okay, nothing is working. It said in-game that there is a file count of 0. I have a hunch I published it incorrectly…

No I think you published it right, someone in the “Website for Custom Civs” was having the same issue. They said the problem resolved itself, but didn’t quite say how. My guess would be that maybe the aoe mods servers are a bit overloaded, considering a lot of mods have been published recently. There’s a few things you could try. One is to wait a bit to see if the aoe website decides to recognize your mods, and the other option would be to try publishing the mods directly from the game rather than the site.

the other option would be to try publishing the mods directly from the game rather than the site. 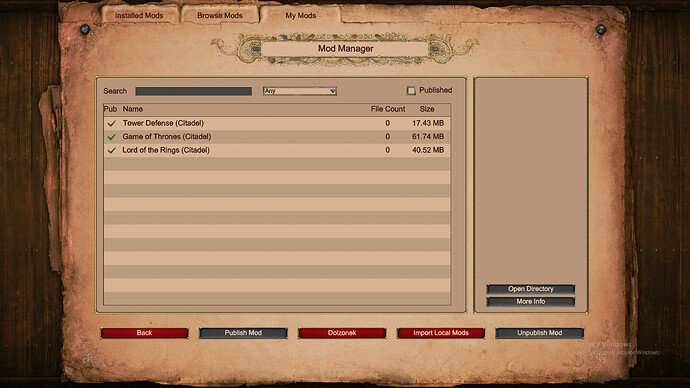 Yeah no problem. Hope you can get it working! If all else fails though, I think there’s a way to play with your civ on singleplayer by placing the mods in the local mods folder.

I’m trying to unpublish and republish my mods using the mod menu in-game. I can’t, because it says there are no files, but oddly enough, the size is listed. Correction: It does not give the size when I go to update the mods, because apparently there are no files.

I’m not sure what’s going on, but the links you posted only send me to the forums main page. What are the names for you mods? I’ll try manually searching them up.

I used the links and they took me to the mods. Try again. If you can’t find them, they’re called, “Armenians and Georgians Custom Civilizations” and “…UI,” respectively.

I found your mods in the mod browser and they seem to be working alright for me. All the files and stuff are there, are you still having trouble with the datapack?

Yes, I am, and I don’t know why. That’s why I shared it, so I’m not alone in trying to figure it out.

Does it not show up in the dropdown when you host a game? And also does it show up in your “Installed Mods” tab?

No to both. Does it for you?

Yeah they both show up for me

That’s weird. I have no idea what’s going on.

If you search them up in the mod browser in-game, do they both have the green checkmarks?

I haven’t thought of that. I’ll do that later.