How can I make my own campaign background activated with "UserMaterials"?

Hi. Thanks to cly0806, I received a PDF file about JSON for AOE2DE. However, even after I referred it, there’s still something I have to deal with.

It’s about the “UserMaterials” part.

I’m preparing my own scenario for The Imjin War of Korean history, and already I prepared my own background image, each scenario, and even translation into English as well. Other parts like slide images are left. So, before I make them, I wanted to see if my background image works fine. 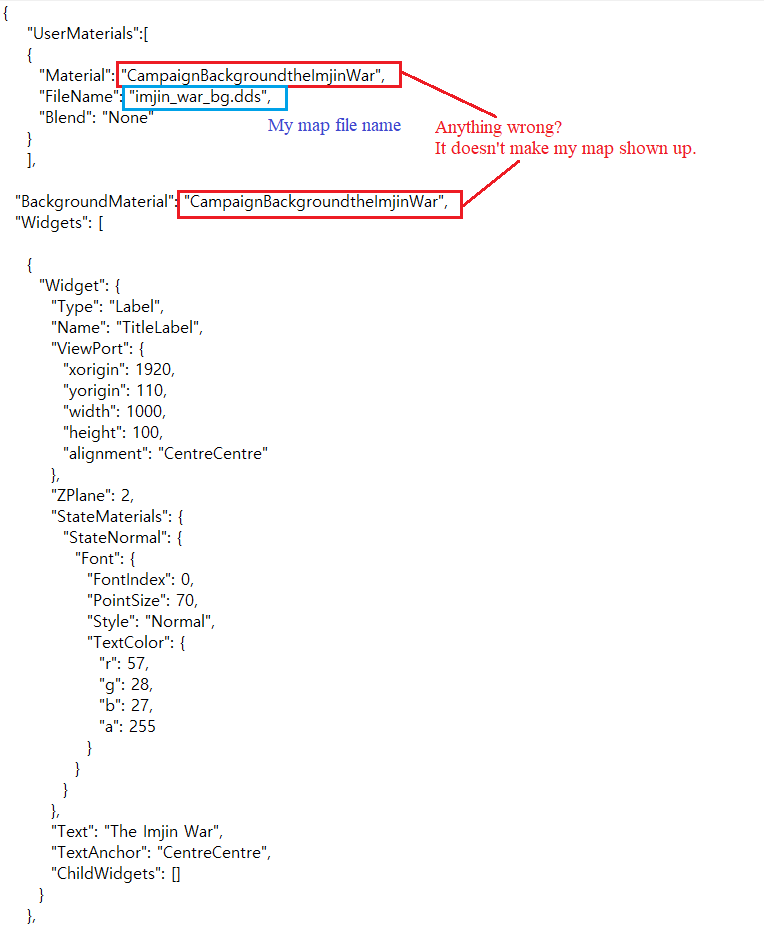 Are there anything wrong?

I set the whole campaign folder in my “local” mod folder, and thus, I can see the name of my campaign file “The Imjin War” on my custom campaign selection tab. However, my background didn’t show up.

Only if I can handle this, then I think I can finish my campaign. The first but biggest matter is that custom background image. Unfortunately, there’s no any map that is specifically showing the Korean peninsula, I have no choice but to make my own map for it. So, I need to resister or designate it into JSON layout file.

The above part of JSON layout is deformation of Vytautas the Great layout. Its original designation was “CampaignBackgroundVytautastheGreat”.

My own map is a dds file, of couse. How can I make it shown up?

Even the guide PDF didn’t tell me what is wrong. Thanks.

Well, at least I found that I should’ve saved the map file on the folder where the campaign file is saved instead of “mod\local” folder.

But I failed to show its background. It was transparent with gray and white squares. It means my dds file wasn’t recognized. What is this? How can I make JSON recognize my dds file?

You must do like this,put your all usermaterials in your mod Catalogs like
resources\ _common\campaign.
There is a picture teach you how to do this.please look at it carefully.

That doesn’t work unfortunately even though the image file is dds. 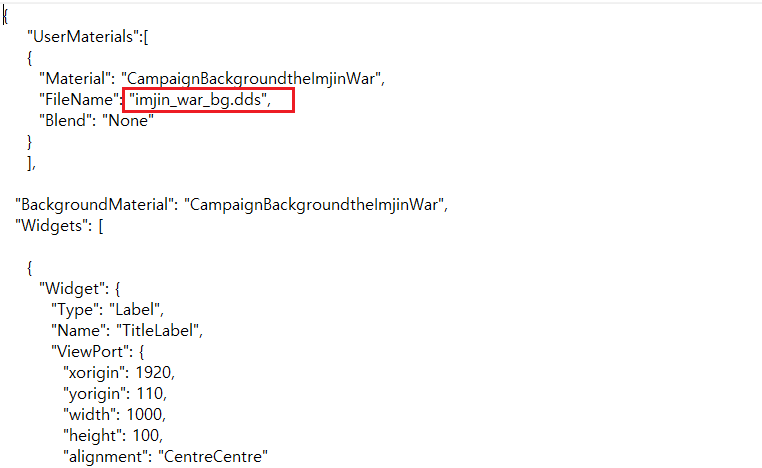 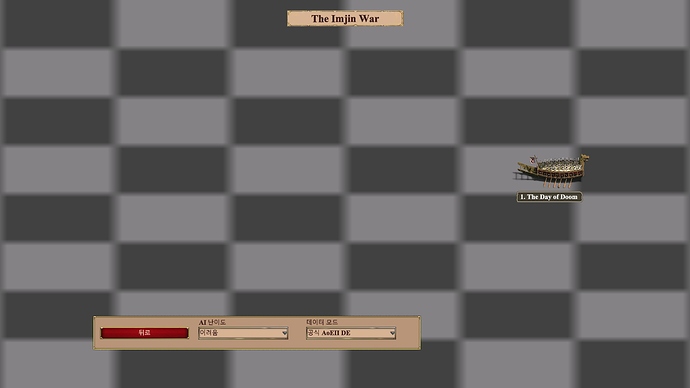 As you see, the image doesn’t show up at all.

This is the biggest but the most basic problem I have to overcome to set my campaign available. It’s been already several days since I started fighting against this bug.

Unfortunately, I don’t have Photoshop nor I don’t know how to use GIMP to deal with DDS files though I searched all the way on the internet.

If you want to do this ,maybe send it to me in email would be better,I will help you find where the question is.
The dds must be 5120*2160 and must first is png file and then use the convertion website below to change it into dds.
The website is convertion
You can click it for convertion.

Thanks a lot! Now it works! Wow! I think the image size was the problem. I thought it must be 5120*2160 as my image was exactly based on a copy of a sample image file for AOE2DE. Its ratio was fine, but the size was much smaller than I expected. After adjusting this, now I made it! Thank you so much!

Have a nice day!

Thanks for your campaign.The battle of Byeokjegwan ,Jiksan and Jinju Siege are not in your campaign Imjin War,
And ask you a question.Where is Idonghyeon ?Is it in Jeolla?I found no infomation in Bing.cn or wiki.

Oh, wait! Did you play that? Did that work? I found my campaigns don’t work. Even I can’t fix it as they don’t allow me to edit the mod posts. My campaigns just showed a “!” sign in game when I subscribed my campaigns to validate them.

If you played that, it means that they removed my campaigns for some reasons.

Idonghyeon is maybe a historical toponym that is only said in a book about Jeong Giryong. The battle itself is quite historically unclear whether it was intense or just small. I personally think it was just a trivial victory at most rather than a major one. The scenario I made is, thus, just more for “reinvasion of Japanese” rather than the unclear battle itself.

Also, some other major battles like Byeokjegwan and Jiksan were made by me unofficially, but I replaced them with other scenarios. The Siege of Jinju or Haengju are so similar to the first scenario that I didn’t made them in the first place. I usually make one campaign within 5 scenarios, but this one is already 6.

Idonghyeon?Where is it, I think it is not famous.Can you let me know when the battle happened in which month in 1597?I will send the correct mod to you with email ,you must pack like this, or it does not work.

Its exact battle point is even not clear. Haha. It’s somewhere in now Goryeong (고령), near Nakdong river. Idonghyeong itself is, as you said, extremely minor and not known to almost all Koreans as well. There’re some posts on Korean websites about the battle, but that’s 99% fake; in fact, the posts tell the same thing as they all are pasted. lol. They tell that Nabeshima Naoshige was killed, but in fact, that’s never the case. So, other than the wrongly spread information, almost nothing is known about the battle. That’s why I think the battle must have been at most just a trivial one.

Well, later, when I can upload my mod again (when my former ones get removed… so far, they’re still there, and I can’t delete them strangely…), then I’ll just fix a little bit that term or name.

Thanks for the email. I received it. However, I couldn’t upload my mod in the first place this time; it fails. I’m so confused what is going around the mod publish section. Maybe, they blocked me as I uploaded wrong format twice in a row (both EN and KR)?

[EDIT]
Oh, I managed to do it. I logged out and logged in again, and then I was able to edit my mods. What a buggy site it is…

Do you mean you fail to upload it on this site? I experienced the same thing, even I couldn’t edit my mods which even had wrong formats. However, after I logged in again, it turned fine. I edited my mods successfully. I don’t have any extra mod of mine that it’s hard for me to test uploading another one right now, but I think relogging in could help you…

If not, then I think it’s because of this site itself. I found this site for mods itself is buggy as what I experienced tells.

No, I meant, that you are having troubles publishing mods and maybe Dodo could help. But I am glad to hear that logging out and in fixed your issue

I can confirm that this case was due to an authentication issue.

I hope you can change the 4th scenarios into Jiksan or Ulsan or Namwon,I searched so many and are sure that they killed the Nabeshima Naoshige is a fake conclusion.This Japanese lived so long until 1618 he died.So I think if you have finished other scenarioes please had better change it into other scenarioes,thank you.History must be true first.
Thanks for your reply and looking forward to the new famous scenarios.

There is the only wriiten about the Jeong Giryong and the Goryeong below. 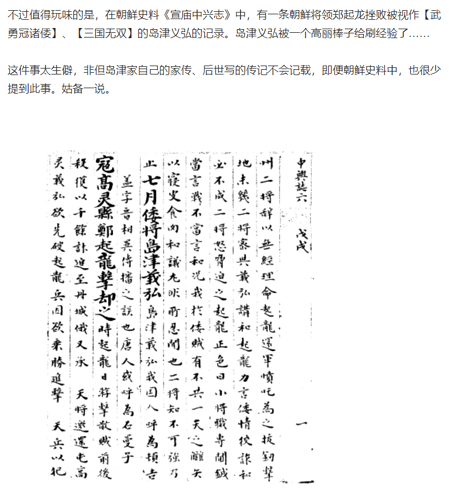 The 4th scenario is not that about the battle though. That’s because I also think the record is not that true, especially as for Nabeshima. So, the scenario doesn’t need to be changed as I didn’t made that one based on a real region unlike the others. Unlike others, that one is made out of deformation of a Random Map. Haha. The 4th one is, thus, now just about the 2nd invasion and fighting against some of them. You can see that there’re nothing like killing Nabeshima or something, and also the ending of the scenario tells that it was not consequently successful as Japanese troops eventually successfully reached Jeolla province anyway.

Why not put other finished scenarioes like Jiksan ,Ulsan or Byeokjegwan to replace the unbelieviable 4th scenario?
Our Chinese want to make a campaign for 공민왕（恭愍王）6-7scenarioes,a king of the Goryeo.I think
공민왕 is the best king for Goryeo to make a campaign.Do you know something about him?

Welcome to join the qq group 112822759 to discuss about the Imjin War or Korean History and the better creating skills for AOE2DE.Waiting for your joining!

Well, I excluded some scenarios that can be similar to another one. When it was unofficial personal campaign, the scenarios were

Later, I excluded 4th and 5th as their P1 was not Koreans (Chinese for 4, Japanese for 5) and replaced the two with Myeongnyang. After that, I also removed the 6th and added another battle of which its background is inner Joseon within the second invasion. So, a possible battle in Jeolla province (Idonghyeon was just no more than a reference.) was added.

There’re some other campaigns I unofficially made: Gwanggaeto the Great (2 swords), Yi Seonggye (1 sword). The latter one is partly in the period of king Gongmin. There’re also some ones I made when it was HD edition: Kim Yusin, Wang Geon.

Well, thanks for inviting but not right now.

Thanks for reply, looking forward to your next plan.I hope you can modify the layout with the diffculty swords and add the help part. I hope you understand the JSON dictionary and make a better campaign .
The people Jeong Giryong and Goryeong information is below.Goryeong