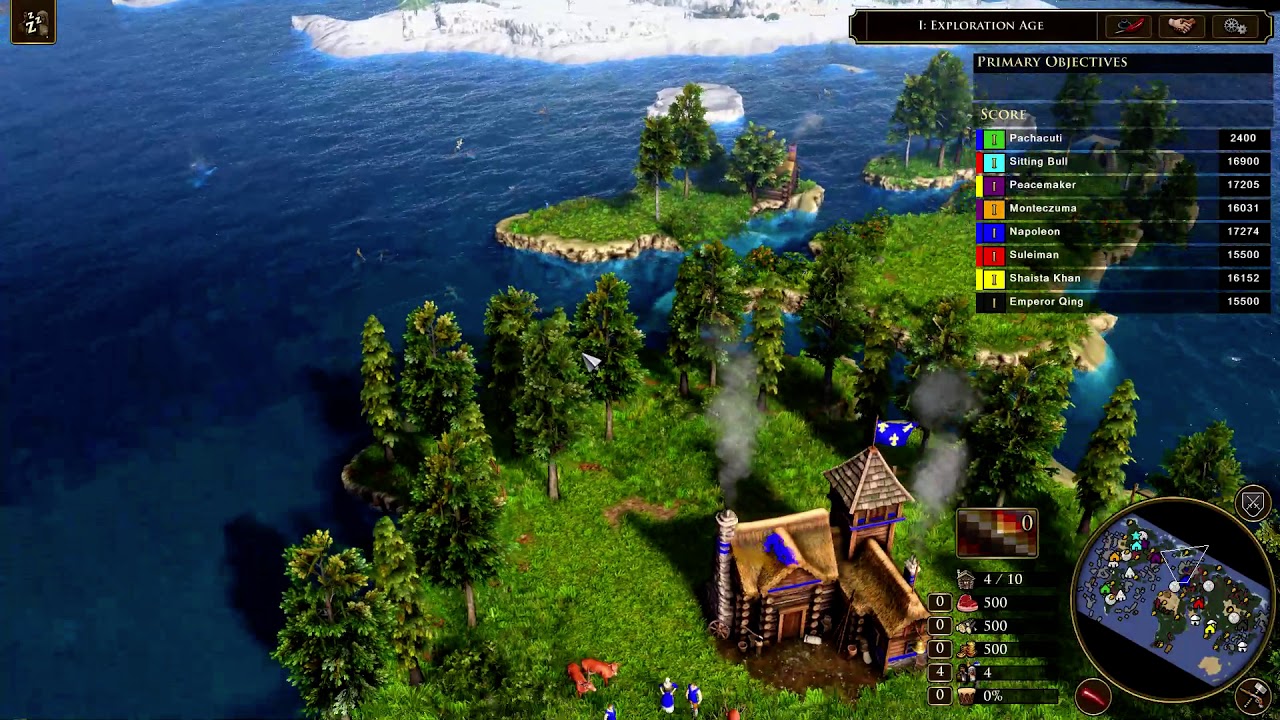 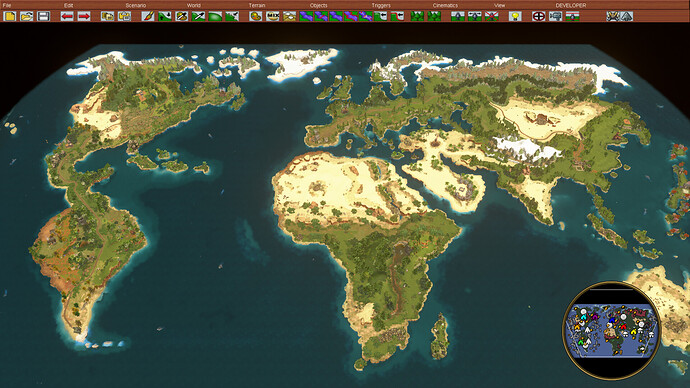 Update with the complete map o/ Some notes about the map:

Looks wonderful! Add more trade routes. Any idea how to recreate the extensive water trade in the Indian Ocean?

Also add native settlements of all types distributed around the world, so reaching Japan we can get Sohei support and maybe add Jesuits to Iberia(Spain), Rattan Shields in Indo-China/Tibet, Sufi Elephants in Persia and as such.

Long ago, I had made a world map in the original game. And I exported it in the definitive edition.

If you want inspiration, you can find my version of the world map in the mod section:

But I saw a lot of problems (30 textures max, civ locked in the multiplayer lobby, dark textures after visiting homecity…).

Be careful with large maps. You can find the scenario editor bug thread here:

What the actual hell did you guys do to Scenarios?! III - Report a Bug

Age of Empires III Team, I want to point out a couple of things that have had a devastating effect to Custom Scenarios after the update. Before I began, I would like to point out how truly disappointed I am in the lack of attention Custom Scenarios have received for Age of Empires III DE. The lack of emphasis and sense of importance the Scenario Editor got was laughable to say the least. While pointing out my disappointment I would like to add - while reviewing a lot of unit files I have a que…

Good luck. If you will publish your map in the mod section, i will share it in my own map description. I really like your first map rendering.

Was looking for suggestions about the Civs, you nailed it!

I did tried adding British with a upstarted eco to make it balanced with other civs, but AI didnt handled the lack of building space well. Maybe pre-scripting their eco could make it work, but overall using France is just easier.

Lakota on Africa is a bit immersion breaking but would solve the spreading issue, ill look into it.

Any idea if there is a max limit of Native settlements you can have per scenario?

Think i played the original on Vanilla long ago, looked glorious! Really like how you handled scale too, map had a great balance and worked pretty well.

Yea, the texture bug is hurty; you can’t picture biomes properly (and cliff textures are included on the limit so it makes even harder to achieve scenery variation).

Cool! Actually, if you feel like it, we could add this as an addition to your map, (so it would be released together on other distributing channels - that would add a lot of value for the file) Also, there is a lot to be done, would be great to have someone else with your experience working on this

Updated with the complete map o/

Good work. I made an earth map scenario long ago and it’s a lot of work doing this stuff. I’d rather RMS this than go into the editor lol.

Haha thanks, and RMSing it is beyond my darkest dreams XD

AI behaviour is kinda funky thou. I noticed that if it doesnt have bushes near (but have goats, deers, and any huntable), it will send all villagers to the nearest bush (even if is inside enemy territory) and skip huntables. After 2 min, it changes behavior backwards, it abandon bushes for huntables even if still have bushes.

Still no opacity control for textures…

Hey Compound, could you add me on Discord please? Chemz#1579

I am looking forward speaking with you.

Good job ! I like the small details on the map !

Cool! Actually, if you feel like it, we could add this as an addition to your map, (so it would be released together on other distributing channels - that would add a lot of value for the file)

We can make a compilation of earth map. On this forum, or a special compilation mod.
But for now, the editor has so many issues and i prefer to wait a bit, new updates and bug fix, before that.

But for now, the editor has so many issues and i prefer to wait a bit, new updates and bug fix, before that.

Thanks! And i think you’re right, not a good moment to upload anything while the black textures/limits + multiplayer lobby issues aren’t adressed.

It’s understandable that the game have more pressing matters now, but editor bugs weren’t even noticed or put under investigation, so investing time creating content feels like wasted effort since nobody will (or can) play it.

Would be great to have some kind of statement about the plans for the modding/map design layer on DE, or content creators will slowly lose interest and move to other plataforms, as this look like a replay of the vanilla philosophy about modding/editor support.

But if things eventually move on, the compilation is a good idea o/

You should report all the bugs you encountered while using the editor. Since devs often miss even the most apparent bugs.

Well i did brought the texture limit / black screen topic, wich have been also mentioned by Stark and Chemz and others. Black screens midgame aren’t properly adressed yet (aka we can’t know if it happen due to a new building adding a ground texture and thus breaking the game, or if is a totally different issue). It could be an engine limitation, but afaik it wasn’t there on vanilla.

Chemz made a post that aggregate most of the issues:
What the actual hell did you guys do to Scenarios?!

So the feedback is there.

Then you have the bugs that carried over from vanilla. I admit i had a vague hope ModifyProtoUnit would be fixed, was hyped for it. XD

This map looks amazing but the download link is busted. Could you update it, or if anyone else in this thread has the file, could I get a copy?

Hey, can somebody help me?

I want this map to play on, but if i click on the link to Download the map i get the Message “This data is not availeble”.

Can somebody give me a reUpload?