This is the result of my own discussions with people in the game discussion group, what do you think?
This link is a URL that can be ranked 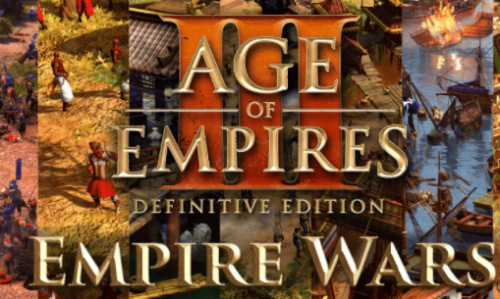 I hope you will participate in the discussion

It is almost impossible to agree with a tier list 100%, for me Japan, Sweden and Hausa are not S,
France I believe you in A because it benefited a lot from the native rush currently, Spain is not A even jokingly, Ethiopia is not A either, it could even be SS, Germany currently could even be S, Russia could be B, hadenosaune too, India is A o Yes, Ottomans and Holland that range is very debatable, Portugal and Incas the truth that they may need changes more than anything to the Incas is such a broken civ and at the same time so bad

I agree with the jist of the list, China is indeed the most OP, lakota is still stupidly OP and gimmicky, Japan obviously OP, Brits yes, I would include India in S tier. Hausa feel very strong… and yeah, I wouldn’t include Sweden in S. But A maybe.
Dutch probably A tier still, Spain B tier.

Russia is only C tier because of the sanctions, I’m sure.

It’s really seem Russia is lacking something, i don’t know, maybe a 1 Blockhouse infinite shipment to balance with the other having two towers maybe.

And, i’m not sure the infantry should really be trained the way it is. i’m okay with the debuffs to discount, but the fact that you can’t let 1 musk in queue, and add the other 4 near the creation time, really bothers me.

It’s all subjective. There are some op strats to several civs but the only ones I will say are systemically op are china and Japan. They seem to be untouchable. The Japan auto economy with dual teleporting heros superspeed units and LOS everywhere is particularly grating.

When I play players of my same rank in these two civs I can see that I’m outplaying them clearly but still get rolled. It takes alot of the enjoyment out of the game.

The latest native rush lame is annoying. It’s just a grind and not a fun game to be in. This is one of the afformentioned strategies.

Yeah, as OP as Sweden’s auto gathering eco was at least they had to send vills across the map to build torps. Limiting the smoke teleport to only ONE monk would be a fair change imo, or getting rid of it altogether.
Japan & China have so many issues it’s not even funny. 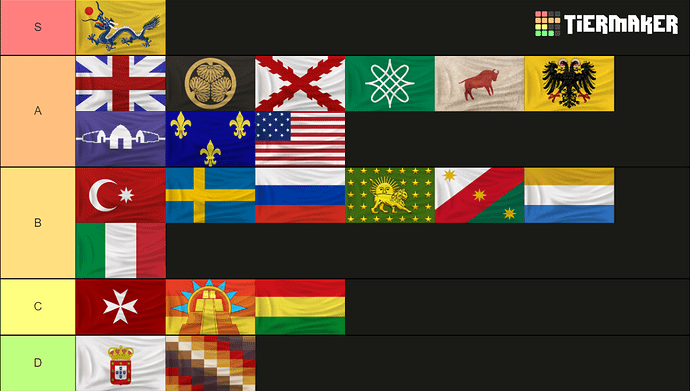 This would be my tier list. I agree with china being S tier. Ethiopia pre-patch would have been A tier but they just keep getting nerfed harder each patch so I put them in C. Equally with aztec they’ve been nerfed significantly with the changes to fencing school. Lakota are only A until they fix the silly age 4 card. The new civs feel mediocre at best with malta being the worst of the 2. Not sure why you put iro so low, they’re a very strong civ.

I think it is really hard for everyone to agree on a tier list as there are so many individual variables at play. However, I agree with China at the top and Portugal at the bottom. Ports, without water are like ducks without a pond. Russia, is also in a weird spot in my opinion. They have one strong rush option and that’s it. I think that Russia and Portugal do need some rework to make them more appealing and diverse.

I’m not so sure. At the 1300~1400 lvl there are some players that will boom Russian econ instead of rush and it’s pretty powerful. Since it is for the most part unexpected it makes it doubly so. That’s why vs Russia you always make cav first. Start raiding immediately and turn around when the rush occurs,if it does.

IMO that is the closest to reality tier list I’ve seen. Well done. China is indeed almost unbeatable, Brits are still S tier after small nerf, Japan & Hausa indeed are OP, Lakota still OP, just not as much after rework.
Iro India Germany at the top yep.
I agree Spain at best lowest A tier/B+.
Kudos

man just to describe how strong china feels atm, i played against a person with 400 more elo then me and I had a shot lol

SS - China is versatile and overly powerful, has a very safe FF with the blockhouse, and overwhelms you with its mass of units, and destroys your artillery with meteor hammers and hand mortars.

It also has a strong age II backed by a good echo and is now safer against cavalry with the mongolian army.

S - Lakota has a very strong rush, ff and fi.

The rush is stronger now because of the high siege that the Lakota inf has, and the Cetan archers’ shot accuracy improvement.

The FI is OP because of the broken card that gives you 21 inf soldiers and upgrades for free.

S - Japan’s only real weakness remains being too slow to boot, and he can be punished. But he has a lot of broken things that we all know

S - Brittish continues to have a very strong economy, and has even gotten a little more versatility with a possible ff with the age I TP’s card.

S - Hausa and his tricks, griots…

Spain, Germany and France seem to be at a similar level of power, many people think that spain being faster is more powerful, but has the most difficult macro / micro of the three.

She has an army too specialized in countering counters, she is weak against civs focused on musks.

She has obtained upgrade cards from skirmishers, dragons, and crossbowmen. And more eco with the two haciendas and the wonderful year. The house of trastamara that allows you to better transition to age III after a prolonged age II.

But you don’t have room in the deck if you want to continue to have an aggressive deck.

Spanish gold has been too nerfed.

Logistician has been too nerfed.

The dogs have been nerfed.

The anointing has been nerfed (Ah, more micro!..)

And the Reconquest card is too difficult to monetize, and it would have a lot of potential if a rework were done (because the Spanish can use war dogs, pikemen/crossbows both in rush and in FI “although now not the same”… even the spearmen Mayans I think they count as an archaic unit).

So in summary, they have more interesting options but they continue to rely competitively almost always on an aggressive FF now weaker, and / or on a possible Rev.

Germany and France are buffed with the latest DLC because of their fantastic mercenaries and European natives.

What gives more viability to its most characteristic strats.

And all have benefited from the change to only maps with tp, and the xp benefit of natives tp’s.

Iro and India seem to me very versatile and very very powerful militarily.

Cant wait for the Ports rebalance/rework. The wait is becoming painfull.

As a heavy artillery positional warfare player, I think civilizations that have factories and fortresses and can produce heavy artillery are very advanced civilizations. China must be SS, a civilization that combines all the advantages, Malta, the United States, Mexico and these emerging civilizations. The strength can definitely be regarded as S, and Germany and Spain, as well as the United Kingdom as a traditional power, must also be S, and other Western civilizations, including Russia and Turkey, have no obvious new changes, but the strength is still there, so it is A, Yiluo The Quebee has a complete military system, so it can be regarded as a powerful indigenous civilization. In A, the Netherlands and Italy are not very popular as fortress players, so it is B, the Inca and the Aztecs are pure infantry countries for me. It can only be placed at the bottom with countries like Portugal. C

Don’t agree with ports being that low, they are very strong, and why is China SS tier the games I have played unless they rush you good they lose.

Ports are good in treaty, but 1v1 they are probably the weakest right now. I would even say they’re worse than Inca.