technically yes. But I’m only listing the problematic ones. tweaking a units stats or cost doesn’t fix the dumb. I also wouldn’t advocate for every single thing on my list to be removed entirely, but its something to consider. The wonders provide more eco than is probably reasonable for an ageup bonus, a small reduction to their efficiency would be fine. like a 15% nerf to porcelain would already be a big improvement. War academies should probably be 250w. China shouldn’t be able to overpop from academies as well as shipments. Villages are… whatever. they’re awful but probably not worth changing at this point. They shouldn’t receive shipments at the very least. whats the point of sieging the tc if 12 units are gonna pop from the village behind you 6 seconds later

war acadamy at 250w is reasonable, same to the efficiency nerf of the wonders, I would maybe want to allow a tech of somekind to allow porcelain tower to scale later post nerf to compensate

As for overpoping, i feel like that is kinda of required since chinese armies pop are a bit akward for the game, since they are usually either 6 or 8, meaning that you can only make 1 single army in a 10 pop gap, which is really akward

i think I’ll agree with you here. the overpop is an issue, but its a product of banner armies.

porcelain tower could have an upgrade, much like the agra fort does, to increase its production later on.

i also strongly believe that several unit shipments, especially the infantry ones, should be -1 unit shipped.

I think china is a fun civ to play, i wouldnt want to drastically change them. Just these little nerfs to wonder value, slightly decreased unit shipments and a bump up to war academy cost. Then they wouldnt be nearly so oppressive to play against

had a weird idea reading this: what if you go the other way and make China more dependent on Wonders for eco, nerfing their vills? this could give them a more easily hit weakness but also make successful enemy raids on their eco less damaging overall, leaning into the Factory-like nature of Porcelain Tower and Confucian Academy.

I think it might be more interesting to change the Chinese like this
start resource 6 vllager>villager8
crate of food2>0
cords of wood 2
collection of books1 (Four Books and Five Classics of Confucian classics)
a 30food goat
Regarding the Confucian Academy, it is now a spectacle of producing artillery. This is very wrong. Why does a place that teaches people to learn and worship ancestors automatically produce artillery? You will also find it unreasonable.
My idea is to move the flying crow to the Summer Palace, change the Confucian Academy into a spectacle that can reduce technology costs and speed up shipping, and remove the Confuciusgift card and replace it with the Confucian Academy. Upgrade age bonus resources, age 2400 food , age 3 800 wood, age 4 1200gold, age 5 400food 400 wood 400 gold 300 export 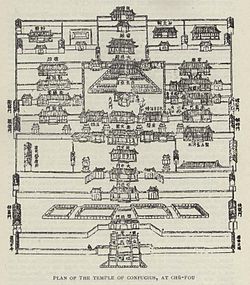 A temple of Confucius or Confucian temple is a temple for the veneration of Confucius and the sages and philosophers of Confucianism in Chinese folk religion and other East Asian religions. They were formerly the site of the administration of the imperial examination in China, Korea, Japan and Vietnam and often housed schools and other studying facilities. There is a 72-meter-tall statue of Confucius made of brass and reinforced with steel. The giant statue is located in Qufu, Shandong province,...

Yeah the villages are a thing. The main reason I consider India to be to only reasonable civ is primarily that of the Asian civs it’s the only one you have a chance of raiding. Japan is impossible in the early game. China is a close second. While India is hitting you with its rush you have at least some chance to slow them down. The villages allow vils to escape the initial attack which they may be unprepared for. Once they are alerted it’s a waste of time as they still have that cover and can spam units from every pore and make it completely ineffective.

Whenever I lose to a civ:

Tbf, losing 10 times is too small a sample to judge the OPness of a civ.

its also worth mentioning india villagers are more expensive, so hitting them is more impactful than usual

The first one is wrong. Summer palace worths 3 vills at most.

I can tolerate India despite it’s lopsided unit strengths. It has weaknesses. Their double heroes can at least be snared and if the other isn’t nearby to drag it away killed.

The disciple/hero of China and double hero of Japan are way better than anything else on the field except maybe the Lakota chief.

Don’t know why the Asian game decided to break the mold with the hero model but it’s never been fixed.

its really not. i have the facts correct. you do not. summer palace is greatly underestimated. The old han spawn generates a banner army every 153 seconds. this is roughly equal to 3 resources a second, a large portion of which is wood. I cant be bothered to give absolute exact numbers but its around 5 to 5.5 villagers. Some banners are more efficient, but ive never sat down and mathed them all out. It certainly is not worth 2 vills lol

Also the confucian academy generates artillery at a rate of about 6 or 7 vills iirc. i can double check the math but crows are no joke, especially shadowteched in age 4

“Iirc”…you don’t remember correctly. Banner army is mostly food, and you will do eco upgrades. Dont assume all vills collect at 0.5 rate…if you want to exaggerate chinese wonder then go ahead say anything you want lmaoooooooooo. Flying crow is worth 600res, produced in 240 secs. That is only 2.5 res per second. Compared to a factory which is 7.15. the wonder is no where near 5 vills. If you assume all vills gather at 0.5 then that’s your logic fine

porcelain tower could have an upgrade, much like the agra fort does, to increase its production later on.

I’m okay with this and finally giving it the ability to focus on export or XP since they can only produce them in a mix bag of resources. Taking as a reference for value of production how much they produce within that mix bag currently of course.

dansil92 is right, I mean look at his jawline, how could you argue against him, he has the facts. 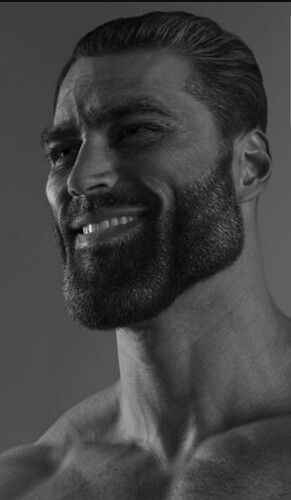 which works out to 2 vills on food and 2.3 ish vils on wood

I slightly overestimated the summer palace in my original post, 8 vills is the porcelain tower and that number stuck with me. Summer palace is very close in efficiency, pop units the moment you get unhoused and sorta mimicks an immediate value of 200w because it produces units without needing a war academy.

So with the above person doing full mathematical analysis we are looking at a 5v + 400f ageup to age 2.

Age 3 you get about 8 unraidadable vills on wood.

I’ll need to do the math on confucian by vill seconds because its almost certainly similar to summer palace, 5 or more vills, plus the huge skirm shipment it delivers.

I don’t understand at all why you’re being so… confrontational and uncouth when all I’m doing is presenting some ways on understanding why china scales so hard economically. I was slightly off on the summer palace, by about a 25% margin which is fine, the gist of what I said holds true- you can age to fortress with no investment and huge eco then spam a really broad selection of very high value unit shipments. Its a unique combination of attributes that is inherently good design (one i like actually), I simply would prefer to see the value of a few shipments lowered by a single unit, and a small nerf to the porcelain tower, perhaps with a tech to compensate later. I also would prefer to remove shipment points on villages, but thats a whole different discussion- one that would be entirely subjective with no math to back it up and thus a matter of opinion only.

as one final note, remember that as you upgrade your villagers at the market, later at paddies, they become more efficient making the wonders look less important. the economy they offer is definitely needing to be looked at from a supremacy perspective