[MERGED] Ranked Multiplayer not working after May 27th patch

After the update from May 27th I was unable to join ranked matches.
I sit for an hour in queue and every time a match was found, the timer went to 0 and a Failed to join match trigger was popped up. From time to time the game crashes.
I have all the updates for the game, Windows, Steam up to date.
I have Cross Network Enabled. If I disable no match is found.

Does anybody else have this problem? What is happening? I have friends who have the same problem after the patch.

I don’t understand what is happening with the game

Try integrity check. Or reinstall game if you have a decent connection. It is just 7.7 gb of files now in download. With good connection should take half an hour. I don’t know any specific about Microsoft store.

Most people seem to have this issue right now. Needs a quick hotfix.

Been playing multiplayer before the update, now I get this error whenever I start the game “The code execution cannot proceed because VCRUNTIME140_1.dll was not found. Reinstalling the program may fix this problem.” When I press “Ok” the game starts. I removed this error by reinstalling x86 and x64 Visual Studio redistributables.

When the game starts, it says “Failed to connect to multiplayer services.”

Any ideas on a solution?

Signed in or signed out I don’t get any errors only in lobby when the match fails.

I have checked integrity and even reinstalled the game.

I was trying to play in the early morning.
Heres my recount: 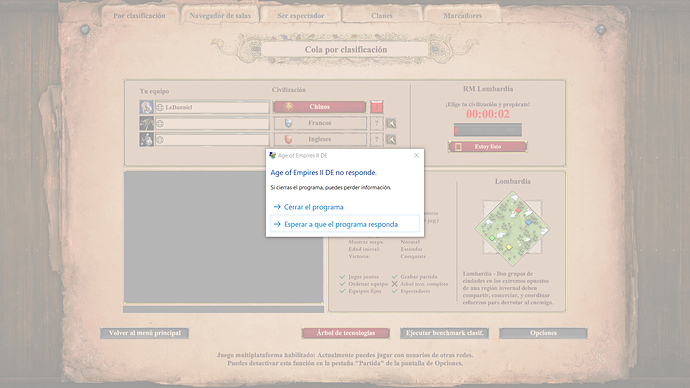 Me and my friends have started multiple 4v4 games and when we get to the loading screen, we wait some time (2 minutes?) until one of each team drops. It happened 3 times in a row.

After waiting one month for you to fix a major issue with bug abuse, I can only hope we don’t have to wait one month to get to play 4v4 again.

After the latest patch, in all the games I played(5 4v4), at least one of the players dropped out instantly. It is nearly impossible to play TG. I don’t know why this is occuring because it happened to me once, the rest instant drops occurred to my or opponents teammates.

Did you redo the performance test below options on the graphics tab?
EDIT: reading the other posts it doesn’t seem related, also it should warn about that

Thank you all for bringing these issues to our attention. The team is aware and investigating the problem, and we will keep you updated as we come up with an action plan.

I have the same issue.
After the Update i cant play more Rating Teamgames.
I wait in Room 2-5 mins. If i found a game. Somtimes i cant see User Names, Sometimes the game start but Aoe2 DE dont work more and the game frozen.

I have untold problems since this “patch of fixes”. Agree 4v4 is basically unplayable. Most times the game crashes for me. Other times it loads to “loading” but never completes loading. I even tried htis on my gaming laptop to no avail. Needs fix desparately.

I have the same problem, seems to be only in ranked games. All rated games i drop before 25 seconds. Frustrating.

Start the game, search a couple of minutes for a ranked match. Get either crashed in the lobby when the timer hits 00:00 or a member crashes right at the start. Just had a new one, game time frozes but I could interract with every unit. Happend 1min into the game.

Maybe beta test the patches before rolling them out. Because this stuff is super frustrating and lowers the motivation to play drastically.

there is nothing wrong with your pc or system. 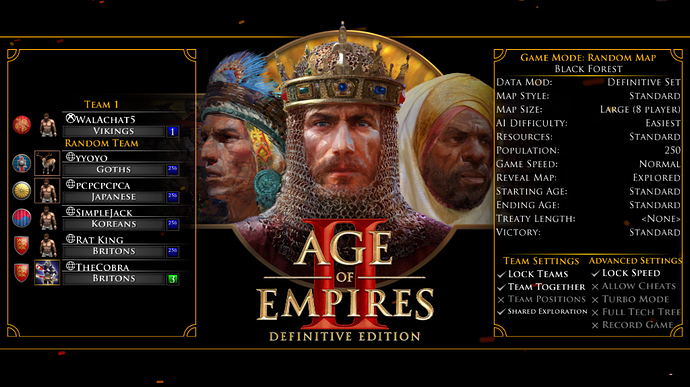 Something strange happened there. This was an unranked TG. In my Lobby only 2 out of 6 people klicked “I am ready”, so I asked 14?, but noone responded. After some time (still only 2 guys ready) this screen appeared. After some minutes I closed the game. At least we now know that there is used an 8 bit integer to store the color someone has (due to 256 that appear in the picture)

Other game today started, but for me it was frozen after 4 minutes. Could not get anyone to chat with me. But my PC was doing well, so I don’t think it was due to too low memory or anything like that. So either the server hosting that game crashed, or my connection was disabled, without giving me the correct exception or the client just decided to not do anything at all (remember: I was able to open chat and everything, but no gametick was processed anymore)

After bad gameplay (multiple tech and such) we now go on to no gameplay at all? I guess that can not be assumed to be a step in the right direction…

Game Version: AOE2:DE Build: 37650 Platform: Steam Operating System: Windows 10 Gamertag: does not matter Issue: When playing (in my example ranked team matches) and I scout around, I can later in Castle age see enemy TCs, because of the trophy thing that is placed on TCs during the May-Hem event. So for example we played Arena, I scouted all of the space in front of the bases in Dark/Feudal, and then in castle age I saw the strange trophy next to a gold pile outside of enemys base. Then I…

Thats the problem with this concept. When do they make profit? Exactly: only once, when they sell the game to you. After that initial purchase an active player only generates costs (he is using the game servers (and those might be expensive), he wants to have some bugs fixed), but he will never again pay money for the game (he already purchased the game, there are no skins or special taunts or whatever as in-game-purchases).
So there is basically no point in holding the players active, everyone who bought and quits (or at least quits MP, SP does not generate costs for the servers) is a win, while everyone who stays active produces costs due to the servers.

I do not know how to not have that problem, but I guess that this is a source of why there are always new bugs introduced, and noone is interested in making a lot of beta tests, because it is not even the goal to keep us players active.

Please remind I do not wanna say “bad greedy company” or stuff like that. I know that they somehow have to make their money to keep the servers running and the people paid. All I want to say is that I do not think that the concept “pay once, get free service forever” is working at all, and especially not in AOE2