Hi Jugg, can you share the AGE entries to allow Byzantine ships to use the Orthodox sails? Magyars should use the Mediterranean Cross sail maybe or the Northern European one…

Hello Juggernaut! I love your mod and was wondering how could I mod your mod for my own personal use as I would to change a few more civilizations such as the Goths.

The sails from HD for the magyar would be nice.

Dude! Magyar hussars should not have wings, not there generic ones either. The wings should go to the slav hussars.

Agreed polish hussars used wings, but magyars in game seem to be designed after polish rather than hungarians… if we get modding tools to remove wings from magyar huszars i will surely move the winged version to slavs

sure feel free to edit the mod to your personal taste

Use Advanced Genie Editor provided in tool_builds folder in game directory to get started.

Sadly game devs removed those orthodox sails, they are nowhere in game files, couldn’t find them. They also removed the editor only heavy swordsman unit. It only has new DE icon but no animation graphics.

I guess you are new to aoe2 or didn’t try the mod yet, just read the description and came here, or else you wouldn’t have asked this question…

The new wingless hussar I have given is a scenario editor unit of a hero unit (name enclosed in summary as spoiler):

Editing smx files(graphics files of AoE2) will be possible when Tevious releases his new version of SLX editor. Even then it will be hard as the Aoe2 units are made of 2d sprites. It will require photoshoping each frame one by one. On developers side they can easily render the new units from their 3d model assets, but on modders side we will have to edit each frame of the units. This is the truth of Aoe2 modding.

By the way we still have some unused hero models from Editor,

Share your ideas on how they can be used in game tech tree?

they only have attack animation

Right. Forgot about that

Updated the mod to 34055
Let me know if I missed something while rebuilding the mod on the new version.

Awesome mod ! Can i use it for my multiplayer game ?

Yes, you need to host a game with the dataset, and others joining the game shall also be using the same dataset.

So I’m new to AoE2 and have tried to download some mods that looked interesting and have been getting issues with them. 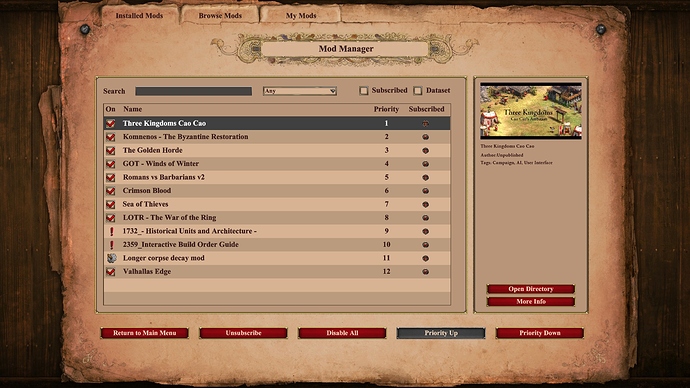 Mod Confusion1920×1080 424 KB
When I try to download your mod and a few others they just keep downloading and when I reopen the game I get the red exclamation mark. Not sure what to do or why it happens. Any ideas?

Seems like a bug with the mod manager itself. I heard there was some bug with people unable to use it when they have non-english letters in their username…