Most OP unit in AoE4 never even existed

A conspicuous, well-known and intriguing fact of history is, China never had large siege bombards.

For info: only Ottoman Empire (the Empire alone had almost all the world’s wall-breaching bombards), and to a lesser degree, Delhi / India and very few European nations built some. End of list.

Viper has confirmed. The most OP unit in the entire “historical” game is… the “Chinese bombard” (why not famous English medieval laser gun?).

At a moment when siege nerf is the urgency of the day, no need for further comments? 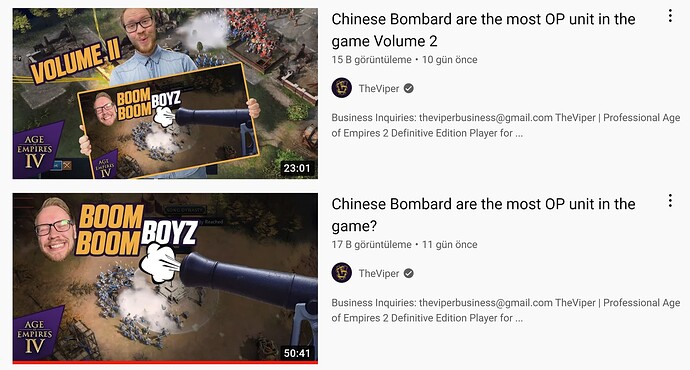 I like those super pro players figure out some stuff much later than regular tg players … Everybody know that FL and Chinese 12 tiles bombard are completely broken.

lol you know that youtube titles are just clickbait right? I’m sure there is a youtube vid on each unit titled “Unit X is OP AF” or something like that…

I knew Chinese bombard and FL is insane OP before too. Now Viper confirmed (video is not new).

Problem is, the most OP unit in the game never EXISTED. Is this Age of Empires?

Why don’t you share one of your games where you get beaten by FL. Lets analyze it =)

lol you know that youtube titles are just clickbait right? I’m sure there is a youtube vid on each unit titled “Unit X is OP AF” or something like that…

Yea, but in this case he means it.

I’m not sure Rus horse archers, if they existed at all, were all that prominent during the Muscovy era either. This can be said to about at least 1/4 of all the units in the game. This is not an argument for anything nor is it enlightening anyone either. Game is a fictional reflection of medieval history, much better than AoE 2 mind you, but still can’t be better or worse than the contemporary writers themselves (who often freely blended fantasy & myth with actual history writing & storytelling).
Especially before the printing press, it’s anyone’s guess how reliable contemporary writers actually are and we often have exactly ONE source telling a story or description of something. It’s therefore no crime especially for the medieval era in particular to have a way with your own fantasy to make sense of certain things, and Chinese having bombards isn’t very far fetched at all.

Aren’t you the guy who admitted to only playing China in another thread?

Viper illustrated how broken the bombards are right in that video.

Then buff bombards by giving them splash (AOE) damage…

“admitted” Not sure how thats relevant to anything outside of actually knowing something about civ?

But yes I do only play China. So what? At least this gives me experience and knowledge how unit works. If you want to understand something then its better try it out multiple times and spent time using them.

Just so u know. Im completely fine if whole unit is deleted or nerffed because it changes nothing other than you guys move to cry about something else next.

Many of you make china sound super OP civ when its actually one of the most balanced civs out there according winrates. Middle of pack not super bad but not broken.

and to those TG players. Dealing with firelancers is exactly same regardless which mode you play. Only difference is that in 1v1 you’re the person who is responsible of dealing with it but in TG there might be someone who has no idea or knowledge which causes you to lose and you’re mad and asking to nerf unit.

So far its hilarious af that I have asked literally like 5-10 ppl share their replays with me so I can see how they play against them and what happens, but so far NO ONE has shared them. So makes me believe that ppl do know how badly they play and what mistakes they make but are ashamed of admitting that they just suck.

I suck it too. I died to proxy tower war elephant rush at 15min mark while I had my pants down and got my rektum destroyed. Do I cry that they’re broken? No. Because I watched the replay and understood what happened and I deserver that L big time.

Yeah, the “pros” are usually late to the game in AoE4 for some reason. Their “confirmation” is what the regular plebs have known for a while.

Because it’s like someone who has only ever tried vanilla ice cream thinking they have the footing to compare vanilla vs chocolate etc.

Whether you like it or not, because you only play one faction out of 8, your posts will be crippled by unconscious bias.

Whether you like it or not, because you only play one faction out of 8, your posts will be crippled by unconscious bias.

Makes no difference at all. Every civ got tools to deal with them its up for player to use them.

How would you even know? It feels like Stevie Wonder is trying to lecture me on what colour I should paint my house.

But yes I do only play China. So what?

U still disscus here on forum about other civs. units and you still claim how are FL on spot and well designed altough everybody (expect Chinese fanboyz - haha interesting miracle right? ) Has exactly different opinion and fact is that this SINGLE STUPIDLY designed unit force you to play differently and in a boring-way of turtling eveything and be constantly scared of some stupid-yolo action.

Players want balanced battles with mix. of infantry/ranged/horses supported by sieges and not stupid yoling FL everywhere which can ruin entire game within 5s when u dont connect a single wall correctly or when enemy is a bit smart and goes for your eco instead

This unit adds literally nothing into the game only cancerous-gameplay and u try to claim here that its not a badly designed unit.

Sorry but I have really to ask you if u are a troll or what is going on here?

Oh and yes 12tiles range infinite hp Chinese bombards adds nothing into the gameplay as well since they are 100x better than any kind of ranged unit.

And fact somebody can drop-hack whenever he wants and ruins game for everybody adds extra points. Now we should ask again why are so many people triggered and numbers drops rapidly. If we are gonna see rankeds in this situation like it is … It is going to be a super-bad JOKE and nothing else

Mainer Syndrome i call It.

U still disscus here on forum about other civs. units and you still claim how are FL on spot and well designed altough everybody (expect Chinese fanboyz - haha interesting miracle right? ) Has exactly different opinion and fact is that this SINGLE STUPIDLY designed unit force you to play differently and in a boring-way of turtling eveything and be constantly scared of some stupid-yolo action.

You do understand the key to fighting them is the information? Doesn’t take genius to scout and be aware where they go and what china does and this applies to all civs.

Ofc you have to adjust what you’re doing to match what opponent is doing.

Are you playing right mode for you if you want to sit back and boom for 45mins and then just spam 1-2 units refusing to adjust what is needed?

Boring is concept which depend solely on player.

I have not said anything if something is well designed and I have said they could rework it but nerffing borderline useless unit is pointless and even if somehow in someway they decide to nerf the FL. Then what? You guys move to next thing and complain about it.

So basically any unit that can kill your eco while you’re clueless about whats going to happen? Knights can do that? MAA can do that? Archers can do that? Should we nerf all the units?

Sorry but I have really to ask you if u are a troll or what is going on here?

Im the master of universe. All knowing eye. My life has been dedicated to FL rush ppl like you for ever from now on to end of times. I smite down foolish ppl like you with the fireylancereys that destroy planets.

Oh and yes 12tiles range infinite hp Chinese bombards adds nothing into the gameplay as well since they are 100x better than any kind of ranged unit.

Except springalds counter them. I could even bet that your main civ is french and only thing you do is mass produce knights and cry when they get countered.

Yes chinese bombards are the strongest bombards in game but not unbeatable and guess what? Thats all china has. So go ahead and ask for it to be nerffed to ground so China can secure the worst civ in history of universe.

why are so many people triggered

As all knowing eye. Ill tell you secret. In history of foolish humans its ALWAYS been the unhappy minority of ppl of something that has made most noise. Humans that are happy/fine are less likely to be loud. So because there is few ppl bitching about something it doesn’t represent anything else than few ppl. Which will always be the case and it will never change

Am not gonna discus with you anymore its completely pointless …

Maybe go and read this over month old threat made by me: Fire Lancers rework

The uber-OP unit that absolutely dominates lategame AoE4 does not even EXIST in history… There was never a “Chinese bombard”. Joke of a game. 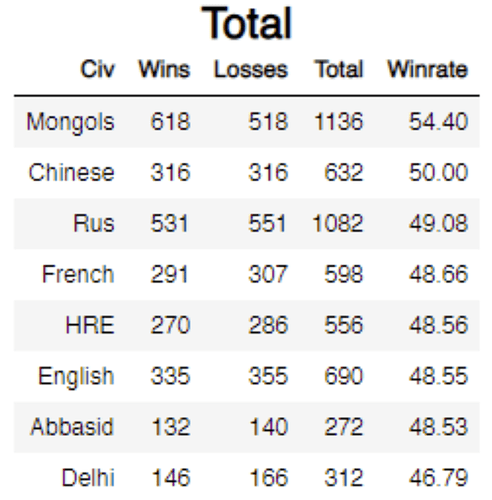 Who can argue that this is an extraordinary coincidence of probability 1 in 1000?