I can understand that the Maltese civilization reuses so many models for simplicity and to reference the classic campaigns, but I think now that it’s out it’d really be a step up in quality to give it some more unique assets for its buildings.

This is the one that I feel needs it the most. No other Euro civ reuses a church model and I can’t find a single Maltese or Hospitaller church that looks even remotely like the Spanish church, those metal spires especially stick out. 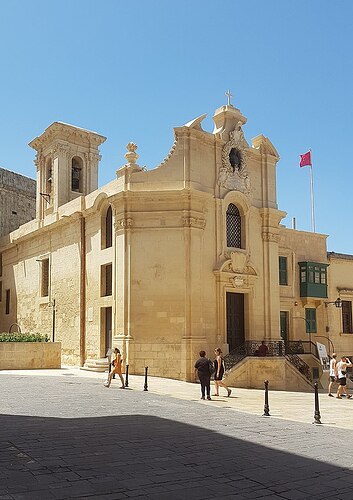 IMG_3920736×1103 164 KB
The sandstone churches are really iconic for Malta and there’s a lot of different options that could be used for reference.

Let me know what you guys think. Is polishing up the visuals on released civs something the devs should be putting resources into?

The Commandery
This one admittedly doesn’t need touching up

It needs to be more clear that it’s the building for training cavalry. Some changes like this would be nice:

Make Malta not look like a crappy mod III - Discussion

I wasn’t suggesting any changes to the Commandery, I was only using that as an example of a new asset that was created but discarded in favour of an old model. If anything were to change, the awning on the side should be altered to have stable stalls to indicate it’s the building where cavalry are trained. Touching up the style and icons like you suggest would also be good. [Screenshot (149)] → [Screenshot (150)] Depots in general seem to be a gong show. They don’t make historical sense, the…

Re: the church
I agree here. I don’t like the Age 4 church for the southern Mediterranean architecture set. The metal spires are ugly and not very church-like. Catholic cathedrals never have exposed metal like that. I’d be happy to see a sandstone version of the church added for Malta, or a better version for the entire architecture set.

Re: the Commandery
I’m ok with the current building, but there is a better bit of art already in the game that’s has bigger tents. I actually use a mod to make it look like the TC used in the Ottomon siege historical battle. Again, I like the feeling of an army being mobilized and not working out of a dedicated building, but providing for its own shelter with tents. This would’ve been extremely common for any army on the march. Officers would have bigger, fancier tents of course, since they could afford them, and the conscripts would’ve been expected to provide their own bedrolls and shelters and carry them with them.

As for them having something indicating a stables, I’m not fixated on that because the Tongue cards allow you to also recruit settler wagons (German), cassadors (Portuguese), or longbowmen (British) in addition to cavalry units. Further, it’s function as a Nydus Worm/teleporter also extends it beyond just a stables.

Re: the fixed gun
I don’t see a real need to change it.

By the way, the Maltese, Spanish and Portuguese home cities all have the same cathedral model. The irl one is located in Lisbon, so only the Portuguese should have it.

Also, before DE, the Portuguese and Spanish instead had a cathedral based on one located in Italy, so DE half-fixed that.

@Catalytic3351 every European civilization gets a unique church, except for the Maltese

I don’t mind it too much in the home city since it’s not such a famous or unique building that it can’t serve as a generic church. The Maltese version has a tan customization option that makes it look more appropriate as well.

We seem to be talking about two different things. I was talking about the in-game model, specifically the Age 4 church that’s used by several civs, the one with the ugly metal spires. I wasn’t referring to the one used in the home cities. It’s pretty well-known that the ES devs reused a lot of assets when making the home cities. Anyone who has ever programmed will respect that choice, or at least the necessity of doing that from time to time.

I’d be happy to see the Euro home cities get a bit of a revamp, but it’s such a low priority request for me. I’m happy with them as they are, since that’s what the original game came with. As far as home cities go, I’d rather see:

I’m talking about the in-game churches as well. Every European civ gets a unique church model except the Italians get the Basilica and the Maltese reuse the Spanish church

OTOH the Maltese civ is transparently made to be a low-cost pack-in beside Italians and European maps. That’s its reason to exist. New building models may not be on its budget plan at all.

It’s not impossible for more expense to be allocated to Maltese architecture, but I’ve been burnt by the Ethiopian Jesuit Church and Hausa Berber Mosque before. At launch, those two buildings reused Portuguese and Ottoman models, then were updated into bad texture repaints of the US Meeting House and Ottoman Discovery Mosque. The Lesson: poorly budgeted jobs can look worse and more like a mod than no-budget reuses.

That’s why previously in M00Z1LLA’s thread, I only suggested the cheapest solution I could think of, for the purpose of improving UX:

They are inspired by Sagrada Familia, and possibly the 1915 spire of Barcelona Cathedral. They are art nouveau, not early modern architecture at all, on top of Ensemble texturing them to resemble metal wireframes more than the actual inspiration.

Well, every other European civ has a unique cathedral model as far as I can tell, so I don’t see why these three should continue to share one

The tunnel thing makes 0 sense though. The flavor of the Commanderies is that you’re reassigning your troops and sending them to serve in a different one of the knighthood’s holdings. The hospitaller didn’t have a massive secret tunnel network under Europe connecting all their commanderies. Commanderies of the Order of Saint John - Wikipedia, the free encyclopedia
I don’t even get what logical problem that would fix. Tunnels don’t make you teleport that’s just mechanical shorthand in other rts games. It’s a weird mechanic but it really doesn’t make any less sense than calling up London on your cell phone and having a fully manned battleship deployed to a land locked pond in the new world in the span of 30 seconds.

I think the Commanderies should function kind of like how the Basilica ‘ships’ units. Instead of garrisoning, you’d be sending them back to the home city, and to send them back would require ‘shipping’ them and potentially interfering with the shipment queue.

Sorry about derailing the topic.

I was fully aware of the designer’s original thematic intention (Hospitaller Commanderies across Europe). This below is my argument:

“Redeploying troops” is too abstract & clinical a theme for an RTS. “Tunnels” are much more visceral & evocative. And exactly because the civ is so visibly cheap, it needs every ounce of thematic resonance it can wring out of dry game mechanics. Cheap is as cheap does.

The hospitaller didn’t have a massive secret tunnel network under Europe connecting all their commanderies.

In Starcraft, zerg tunnel worms somehow transport units from underneath molten lava seas and outer space platforms. In AoE3, we are already shipping bisons, whales and mines, essentially bringing a piece of Great Plains, Gulf of Mexico or Kentucky “with us” onto any place on earth. It would be no different for the Hospitallers to bring the Maltese tunnel network with them wherever they go. RTSes are cheesy. Embrace the cheese.

…Gotta admit, by my own UX/information delivery-focused logic, the building would then need construction-in-progress models that show a tunnel entrance being dug.

And in CNC Tiberian Sun you have the excavators of nod…

Commandery could only get different textures applied to the building model. Textures from the Mediterranean architectural set would be the best fit.

No, I’m sorry for being snarky in my response. I kind of get what you’re saying now in terms of tunnels being more intuitive and painting a more interesting mental picture of what’s going on behind the scenes. I still think it muddles the flavor though. Commanderies don’t really have anything to do with tunnels and even though just “shipping” your units isn’t that interesting in and of itself, I still think it’s cool that it represents this military organization with small bases of operation thinly spread out over a large area that can work together and send each other troops. It kind of encourages a playstyle that fits the history. It isn’t really a Malta thing, but I feel like the intention was to make a civ around the Knights of Saint John with a big focus on Malta. It does use the Knighthood’s flag instead of the flag that Malta would have used at the time after all, and many of the units speak German or French rather than Maltese. IDK the commandery just really ties the whole civ together for me so I’d be disappointed if it got reflavored.

I agree, they went to all the trouble to give Malta’s explorer the accurate portrait, but like, they reuse Spain’s church…that’s kinda unfortunate. Like, if you have the explorer lady in the ghonella, her portrait shows it and it’s even like a chainmail thing under it, it’s totally rad and someone spent effort on that, but then cut and paste Spanish church lol.

Okay, back on this topic because I’ve got a few small details about units as well.