As the transportation bridge of the ancient great civilizations,sogdians has left great imprint in history! Expand your city-state, let the trade business network spread all oases in Central Asia, and use Chaakar - a fast raiding anti-spearman Cavalry - defend your wealth.

History
Sogdians (484 AD - 1388 AD)
The Sogdians are ancient peoples who is active among rich oasis in Central Asia , They are related to Persians by blood , The earliest records of them can be found in the Persian Achaemenid inscriptions dating from the 6th century BC .Alexander the Great (356 BC - 323 BC) conquered the Persian Empire and the Sogdians soon surrendered. In order to show his tolerance for multiculturalism, Alexander the Great spread get married the Sogdian princess Roxana in the largest city of sogdians , Samarkand, but Greek rule in Central Asia soon collapsed with the death of Alexander the Great.

The Sogdians who broke away from the rule of the Greeks and Persians is began to set up independent city-states one after another around Samarkand,The Sogdians have never formed a unified and powerful empire, and they have been attached to the great power for a lot of time in their history.Being at the center of the Silk Road that spanned the Old World,The Sogdians quickly used their strengths to become skilled merchants and mercenaries, using their strength to protect and profit from the operation of the Silk Road.Merchants from China and Persia brought their culture to a melting pot called Sogdiana, forming a unique Sogdian culture finally.

Although the powers around Sogdian have been experiencing ups and downs, the Sogdians can still maintain their own uniqueness in transoxiana with their own wisdom. During the period from the 3rd to the 8th century, the Sogdians continued to Nine relatively powerful city-state forces were formed in the region, forming the core part of the Sogdian state.and they are be called “The Hu People of Nine Clans” In Chinese Historical records.

In the late 7th century AD, the Saracens and the Turks rose. Although the Sogdians were nominally under the rule of the Chinese Tang Dynasty during this time,but the religions and nomadic cultures from the emerging powers began to change The Sogdians themselves, the Chinese and the Persians gradually became less influential over the Sogdians, and instead the Sogdians began to Islamize and Turkicize, and over the course of two centuries, the unique city-state of Sogdian gradually disappeared during this process.

Turkic slave commander Anushtigin became the governor of Khwarizm(former city-states of Sogdians) in 1077 AD and began to break away from the control of the Turkic Seljuk Dynasty,The kingdom of Khwarazmia launched many expansion wars in the next hundred years and finally defeating the Ghurids Dynasty in the south and expanding its territory to the limit, In their heyday they ruled the whole of Persia. However, the Prosperity of Khwarazmia did not last for too many years. After the demise of the Western Liao Dynasty in 1218, Khwarazmia became the next target of the greedy Mongolians. After more than ten years of hard battles the dynasty still perished. There were many Khwarazmians attempts to revive the country, but they was finally completely destroyed by Timur in 1388. The last descendants of the Sogdians eventually integrated into surrounding countries, and no longer appeared in history as a distinct people. 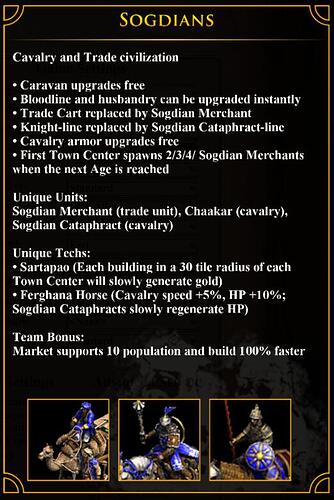 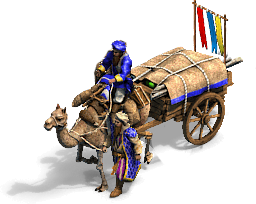 Sogdian Merchant
w100 g50 t50s
Sogdian’s unique trade units can affect the market price through every successful business activity
Detail :Every Sogdian Merchant move 100 blocks in trade activity , they are considered to have finishing a buy / sell operation, and the price of the global market will change accordingly.Which recources you want to buy/sell can be controlled by your market bottom. 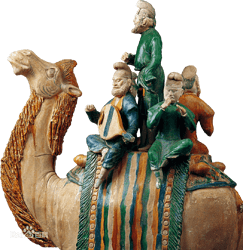 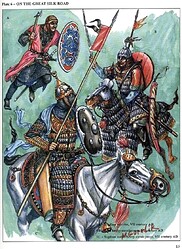 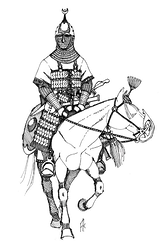 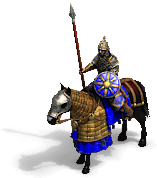 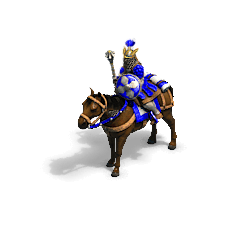 f60 g60 t30s
atk:12 def:2/2
replaces Knight-line, which has a high pieces armor and an addition damage vs. archers, and elite upgraded unlock in the imperial age 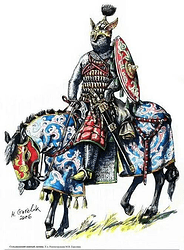 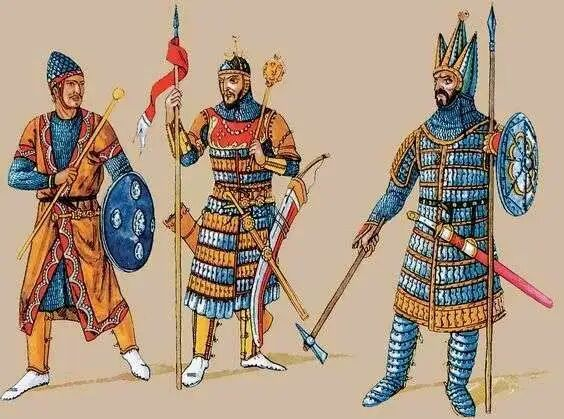 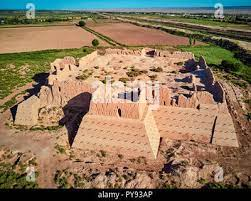 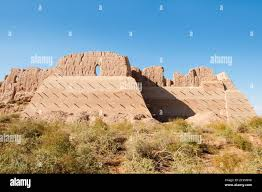 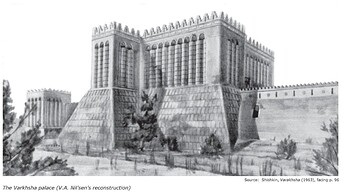 Looks like a very strong cav civ with this, instant bloodlines/husbandry, and a cav UU available at the stable. Possibly too strong depending on how the eco bonus works and what the UU stats are, but can’t say for sure. Also not really sure how the Sogdian Merchant works though, or how strong of a bonus that ends up being…it kind of looks like the old AoE1 form of trade, where you would pick a resource to sell for gold, and the ship would make the trip.

Sartapao : each different building within 30 squares within the influence range of the town center will slowly produce the corresponding gold

Seems fairly strong for something that doesn’t cost pop. What would the rate/building be, and does this apply to all TCs, or just one?

The big thing missing is the stat list/cost of the ČāKar and Sogdian Cataphract, both of which seem quite strong, and seem to counter each others’ weaknesses too powerfully (between the two of them they look quite strong against both spear and archer lines.)

Other that that, looks promising so far.

The Sogdians are already represented by the Persians, I’d rather not use up civ slots on provinces when there are more important civs to add.

I agree, but I also have to acknowledge the non-existent chance of the devs seeing this thread and then scrapping their plans for an African DLC to make a Persians split

. So I’ll judge this based on the effort put in as a civ design, and not for being legitimate competition for scarce design slots which have probably already been apportioned.

I’m going to ignore the (possible) sarcasm, and just ask, what into? Moors or something like that for the interactions with Spain and stuff?

That’s fair, but if it were to be made in a scenario or mod, or any playable form, it should ideally be in ballpark of other civ’s power levels, unless other civs were modified as well. Even if something is just hypothetical, the best way we have of judging it is to see how it stacks up to existing civs. But if its just as an idea, that’s cool too.

I just wanted to post that as my reaction.

Of course the sogdians are deeply effect by persian culture,but not important? they also have great influence in the central asian ,even turkish character are created by them. I don‘t know what is “Important” in your concepts,but in this forum,many American or African civ concept can’t find 10 AI player name is “important” and “worth a civ slot”,but this important civ deserve " represented by the Persians",LMAO

Sincere advice：read The Cambridge history of early Inner Asia or History of Civilizations of Central Asia，then return and say it again:“The Sogdians are already represented by the Persians”

Ok, represented isn’t quite the right term. Admittedly most of my knowledge regarding this is pre-medieval largely, but wasn’t Sogdia a province of Persia and it’s successors? With regards to importance, I don’t really have a very clear metric, but the fact that this is the first time I’ve ever seen a Sogdian suggestion (and I’ve read a lot of civ suggestions), would imply that the community doesn’t really consider them much of a priority civ.

Sogdians included their Medieval descendants such as Turkification Khwarazms，this game has always lacked civilizations related to Central Asia,such as Turkmen,The Tatars appeared in various battles as part-timers, but they are inappropriate
actually some others had mentioned Sogdians in their concepts or polls before this.

Make a concept for the uus to make it complete.
Im assuming building will be the tatar set?

I have posted the Sogdian civilization I imagined on other threads before.

The Sogdians are an Eastern Iranic peoples, same as the Scythians, and the Persian civ is mainly representing the Western Iranic peoples, at least they already have a quite difference here. At their most powerful in the fourth to eighth centuries AD., they had a series of small principalities which were independent, cooperating and attacking each others. Those city-states sit in the middle of the Silk Road, with the Gokturks in the north, the Persians in the south, the Chinese in the east, and the Byzantines and the Muslims who would conquer them in the future in the west.

As far as I know, Muslims have almost destroyed their traditional culture and beliefs, which makes modern people generally unfamiliar with them. However, for Central Asia and even the whole of Asia, their existence is very meaningful. If we are eager to dig more Central Asian or early medieval elements in the game, they the Sogdians are the one of rough jades that are already in sight.

Not deny the community’s fascination with African civilizations, but I must also say in good conscience that Sogdians are pretty better compared to some potential African candidates in terms of the richness of historical materials and their impact on the world history.

You can find solid, good quality knowledge about the Sogdians on this site if you want.
https://sogdians.si.edu/

Sogdians/Saka are a really cool civilization and could also stand in for their cousins on the Ponto-Caspian steppe and in Europe for the Hun scenarios, particularly the Scythians and Alans. It’s a far better choice than using Mongols or Huns in those scenarios.

I did say I don’t know much about Berbers

Technically the Hindustanis are already a split of Persians as much as they were of the Indian mega-civ from HD. Still doesn’t mean that Sogdians can’t reflect another facet of the Iranian cultures of this region, and would pair well with other mountain culture split-offs in a bundled DLC, including Tibetans from Chinese/Mongols/Burmese, as well as Armenians from Byzantines/Persians.