Maybe Karluks but it’s not simple 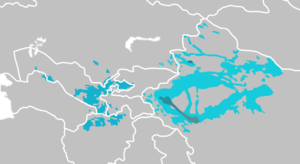 The Karluk or Qarluq languages are a sub-branch of the Turkic language family that developed from the varieties once spoken by Karluks. Many Middle Turkic works were written in these languages. The language of the Kara-Khanid Khanate was known as Turki, Ferghani, Kashgari or Khaqani. The language of the Chagatai Khanate was the Chagatai language. Karluk Turkic was spoken in the Kara-Khanid Khanate, Chagatai Khanate, Yarkent Khanate and the Uzbek-speaking Khanate of Bukhara, Emirate of Bukhara, ...

I’m sad the thread is dead. I hope Seicing reappars.

Could many of these icons be made as flags which could actually be used as eye candy in scenario editors?

All of them if you did the right stuff, might need data modding to add them all, but I think you could do it. Why you would want to, I don’t know, but I think it would be possible.

So they could be used in game for campaigns…

Clearly, but why you would want all of them, I’m still not sure.

I mean a selection of them would be useful. The existing civs in game, and maybe the Italian maritime republics and the Mongol hordes for a start?

Maybe if they added a number of new flag categories, based on geographical regions, with a few relevant civs (or more) in each category? That way, people only have to scroll through the relevant flag types, rather than all of them.

I’d try making the bottom part round, but I’m not good enough at photoshop for that.

I have no time lately

Can’t someone inspired take the job of this amazing guy?

Try making some fictional flags too

Abbasid is just black? i like the Rus one.

I thought the English one was just a redone Italians, same with the Chinese, Mongols, and Franks. It wasn’t until @Zero17893 mentioned the Abbasid and the Rus I realized you had done the AoE4 civs

abbasid pure black standard
This is also black flag in aoe2, but with ۞ pattern

oh i see. So you didin’t want to make the same thing. Well, i think you can do it with another banner like mamluke sultanate flag.

The king is back

The Returm of the King…