Players had asked me if it was possible for me to do a colloseum for 8 players after loving my colloseum 1v1.

I just started on the job is titanic, I would make regular updates on it as a new unit, fix difficulty, technological and add event for fun.

This will be a good project I think after it’s really a big job, I finished the map, and I started the script phase this is by far the longest work to do on the map

I hope you enjoy my work and play a lot on it!

I don’t know when the card will come out yet, but we’ll have to wait a while.

Here is an overview of the map :

it is possible to walk on water if you ask yourself. 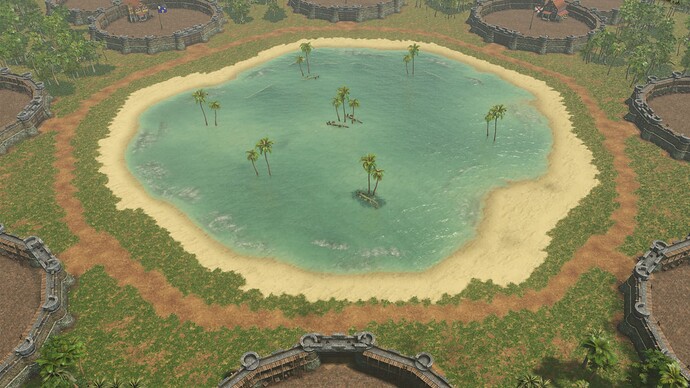 This is already progressing well in the scripts 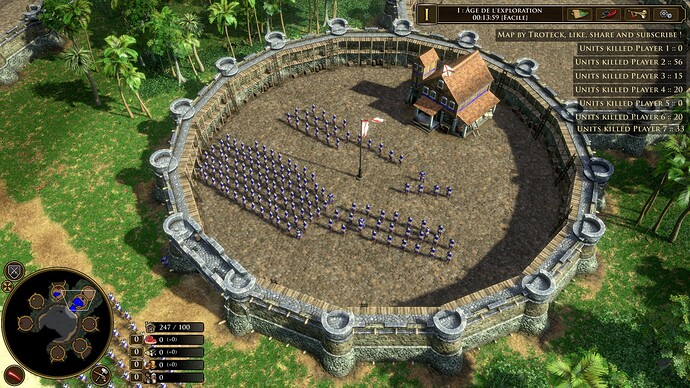 I have added several civilizations, I must add the suede, the Incas as well as malta after the implementation of the last civilization I could start player scripts.

all civilizations are functional

I never understood that mode so only played it a few times. Please remind me how it works.

Pick a civ, build units, and rumble in the mid

Please don’t give the Lakota random non-Lakota units. I once played a version that gave the Lakota like three units from their own military and then replaced the rest with mercs and various artillery pieces.

There’s no worries I take the time to look at each unit if it has a good relationship with civilization.

Basically you have a hero who is locked in a wall block with in units unique to your civilization, you move your hero on the unit for which appears in another wall block in which you have to defend your fort.

And while you’re defending, you also have to attack the other players’ forts.

You are unlocking new units as your number of enemy units killed increases I hope I have been clear in my explanation.

After me I add more things like the possibility to regain life, the change of time of the map, future events when the map will be finished to add fun, the impossibility of the player too camped in his base.

There’s a lot of fun stuff to do about the design.

The wolloseums give you units specific set to the civ you selected,
The old colloseums were basically the same, just the difference, that everyone had the same units.
Some were made in a way, that you can build a little base and build your own units there.
For example: 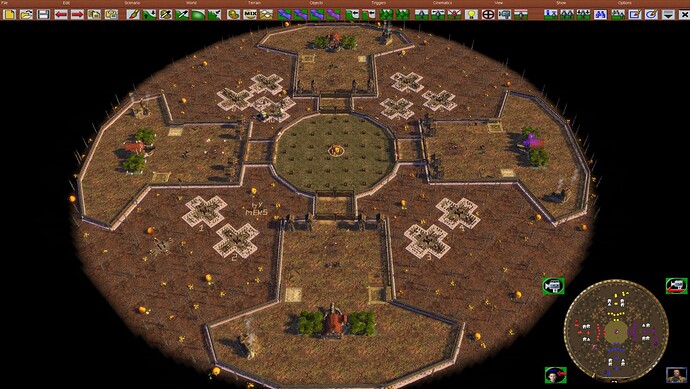 I create a classic Wollo with several additional things like healing its units in its fort, more choice of unity up to 10 per civilization, great map and I have a bunch of ideas to create events like for example an event without a door on it, redesign the map to create fun, stylish or crazy things I have a lot of nice ideas to implement.

I now have 4 functional players it’s very, very long to realize I have thousands of triggers to do it is exhausting.

Yep, much fun … Not.
That’s why the old colloseum were shooting out like crazy, much easier to make

Shout out to you and any other UGC creator. I don’t think people realize how much time goes into making scenarios and other mods. Kudos

I did some tests with the players, many have enjoyed and others asked more in a condescending way with the addition of bonuses permanently while I had warned that there would be more in the future and that it was a test.
People do not understand the work behind I made more than 2300 trigger for the mod, there are for the moment all civilizations, 5 players playable an anti camper system or canon spam, 10 units per civilization and bonuses, a flag control system that players can capture to get life and resources, a day cycle system, the possibility of healing units with the flag in your fort and a second chance system for players, That’s a lot of time spent working for the community.

There was an old user named OnFireGun who made like a dozen scenarios and seems to have been the root for a lot of the old fun scenarios. I remember him complaining about making scenarios too, but he kept going anyway lol

Good luck! I could never get into scenarios. Too much work for me, I’d rather just mod in new civs.

I make scenarios for fun and add content to the game.

What disappointed me is the ungrateful side of these people, no constructive feedback.

During my penultimate test, a person got angry and insulted my work and the other players because he didn’t have a super unit after 1400 kills.

My mod never promised a super unit like the unicorn, I didn’t really understand this moment of anger from the player.

On the contrary, I had players who helped me improve the balance or liked my work and can’t wait to play it when it’s ready.

OnFireGun is still around ^^
(20chars)

Because they think about the wolloseums that appeared around 2018-2020
Insane amount, 1 guy did the work, everyone else copied, and just added more broken stuff.
A shop system,
Insane units after X kills
Effects that damage all enemy units on the Battlefield and so on.

I know how you feel, that it is ungrateful to be the maker of a scenario, where people just see the old ■■■■ , and can’t be happy for new ideas.

@unstoppablestrelezie and me did a wolloseum for Wars of liberty.
Imagine the fun with 40+ civs…