On the old game the Ensemble Studios had a site where it’s stored statistics about every player and civ, it was very cool to read http://agecommunity.com/home.aspx
Does this version will have something similar?

ps: What will be done about this old website?

I imagine that the website will also have Age of Empires III: DE stats soon.

Age Community has stats for the Age of Empires III which uses the ESO multiplayer servers. The community team announced this past summer that the website would be shutting down a month from the post but it’s still online. My guess is the team or the community needs more time to salvage the existing content on Age Community before taking it down.

Is there maybe a public API coming/available (for community sites/projects?) Would love to see something like that ^^

how long does it take to update it?
i played like 1 hour ago , and my match doesnt appear yet, im just curious.
forget it, iwas cheching agge 2 DE
it will be soon, ok sorry i didnt read well

There was the side aoe3.jp.comunity , that use to show statistics of ur last 10-15 games , even better than post-game screen of aoe3 as it shows the number of each units that u made .

Is there was site or place in aoe3 de to check statels of ur last few games ???

There appears to be no functioning stats page. Are there plans to be able to see any stats outside of the in game profile that only states wins, losses, and elo?

Something along the lines of this for legacy:

Yes. The work needed to get them added is in progress though so I don’t have an ETA just yet.

I would like to know from a developer if there is a database with the winrate statistics of civilizations as well as in the following image.
I would love for this information to be published in real time, even for the balance discussion.
If these statistics do not exist, I believe it is extremely important for the community. 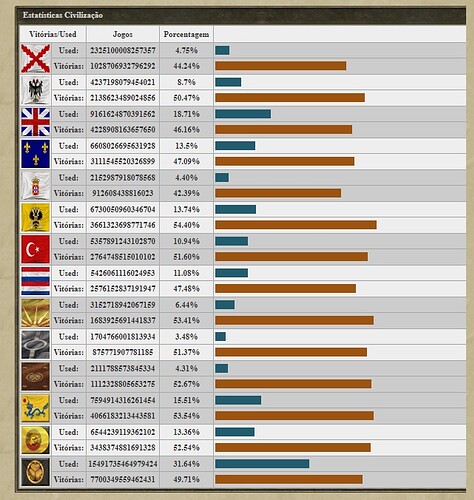 This image I took from the list of changes 9476.
So it means that the game developers have these statistics and do not share them with the community. I see no reason why they shouldn’t share.
I really don’t like it.

From what I understand the backend API already existed from aoe3 so of course they have statistics. I suspect these guys had limited resources and could only do so much, so they didn’t work on documentation to make it public.

AOE2 DE has very good statistics, every game should have statistics like this:


AOE3 DE, AOE1 DE and AOM EE.
And some improvements would be useful, because I see the charts, but I can’t create a top to button ranking based on victory rate or popularity.
2 Likes
Soldeo December 21, 2020, 1:24pm #14

AOE2 DE has very good statistics, every game should have statistics like this:
https://www.ageofempires.com/stats/ageiide
AOE3 DE, AOE1 DE and AOM EE.
And some improvements would be useful, because I see the charts, but I can’t create a top to button ranking based on victory rate or popularity.

Thank you for this post or I would never know there’s a statistic page here 11 Tbh the statistics are still lacking even for AoE 2 DE. I do agree we need more detailed statistics for further analysis. I’m not a data analyst but I feel we require more friendly user graphs, etc.

Come on guys. We just want this available so the community can do the rest and make some nice things with the data… and stats have been referred to in balance changes based on win percentage per civ

Come on Age team, its been 3 months and there’s still no working statistics page. There’s a broken link on steam for statistics. That is embarrassing.

Yes Please! We want stats ! It helps a lot in analyzing things.

The devs should also release winrates, matchup-specific and map-specific. After all they seem to be taking this into consideration (straight up nerf Lakota and India due to winrate). However this shouldn’t be the only thing to look at when deciding balance. Reworking poor design like the Inca Age 2 rush which killed your TC, or the overpowered torps and Caroleans after all their upgrades are send also need to be adjusted. Inca was already adjusted, but we’re still waiting on nerfs/ reworks for Sweden. All Sweden players need to do is spam Caroleans, Anti-Infantry Artillery like Falconetts/Heavy cannons and Culverins. No other civ can get by with such an easy to micro and simple unit composition.

And Aztec and China need to be looked at aswell. Flamethrower need changes urgently, that unit basically doesn’t exist in 95% of the games. And China sees almost no play at high level because Japan and India are so much stronger. A small buff is in order so that China can compete with the other 2 Asian civs in 1v1. Aztec still has their terrible Skull Knights and Jaguar Knigths which need urgent changes, and so does Aztec as a whole. Its still a worse version of Inca in many aspects.

The nerfs to both India and lakota where quite welcome though.
I could even argue that India could use a bigger nerf than just that 1% xp penalty.

any updates on this?