I wanted to let you guys know about the mod I made for the Persian civ. I’m making this thread so you guys can post feedback or report any problems you have using the mod.

Here’s the link for it. I’m also planning to do a mod for Saracens and Indians in the future, possibly Turks as well once more support for adding/editing graphics files is available.

I think Steppe Lancer wasn’t needed. Battle Ele addition is nice. I will release a mod as well. Elephant Archer no longer being a UU with new stats. Some civs will have Ele Archer and Battle Ele. Indian UU will be Gun Mahout or Elephant Gunner. Imperial Camel will no longer a UU as well but will get extra armor 1/1

Steppe Lancers were added because Persians historically used lancers and their empire encompassed the Scythian and other steppe factions, it gives the Persians more mounted options because they lack Imperial upgrades for the foot units, and Persians not having access to them meant once again denying them the full Stable they used to have until Rise of Rajas, and one of the aims of this mod was to make them have every non-unique mounted unit fully upgraded. It was either giving them Steppe Lancers or a unique unit/upgrade at the Stable that was also a lancer (The original plan was to give Steppe Lancers and a unique upgrade from it but I’m still trying to get that to work).

Yeah Ele Archer is a bit underwhelming as a UU, a Gun Mahout/Jingoist would be much more appropriate for Indians. And now that Vietnamese use the East Asian architecture there’s no reason to limit Battle Eles to the South East Asian civs so I like that you plan on giving Battle Eles to other civs. Imperial Camel being accessible to the other civs also sounds nice and that they actually get some armour (I’m surprised Heavy Camels missed out on armour too tbh), because I wasn’t happy that Saracens and Persians missed out. I’ll keep an eye out for your mod when you publish it.

Hi, can you tell me how you create such mods?

Do you have any idea on how to make mods for new civs?

Hey, I know how to mod on HD, but I’m struggling to get datafile modding working on DE. Did you do it online or ingame?
*edit: worked it out, I just had to sign to my xbox account ingame.

This is a thread I have replied in, which answers both of your questions.

Just wanted to let you guys know, I have updated the mod and also published the text mod to accompany this mod. It displays the changes to the Persians tech tree and civ bonuses.

Here’s the link for it. Feel free to post feedback or report any problems you have with that mod as well. I will use this thread for both my Persian Civ data mod and text mod.

It seems that the text mod doesn’t work (ie, “Silk Road” tech displayed in the Tech Tree interface is still named “Silk Road” rather than " Arti Fiorentini"). I had checked the text mod in installed mod list and restart the game, did i miss something important?

Hmm, yeah that sounds strange. I decided to start from scratch as well to see if I missed anything.
So I Subscribed to the mod, then enabled it by ticking/checking it in the On column like in the attached image. Then I restarted the game by quitting, then opening the game again. When I went into the tech tree I checked and the mod worked. I made sure to keep the mod priority low to confirm that priority doesn’t affect the functionality of the mod. If you followed the process exactly as above then it should’ve worked. 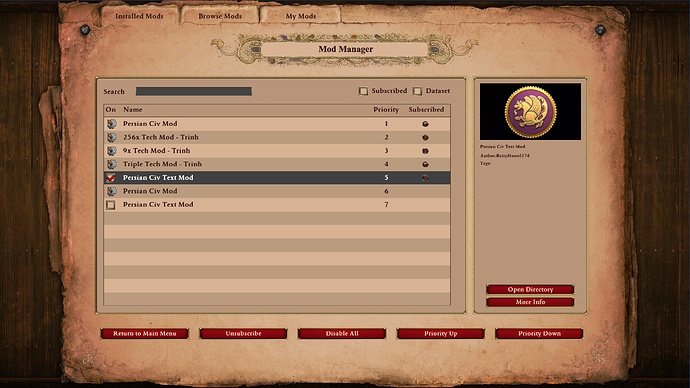 yeah indians shouldn’t be a camel civ. this credit should go to saracens/arabs.

india needs infantry and monks along with elephants. that’s where they boasted.

Agreed with Indians being an elephant civ, and Saracens being the go to camel civ. Will consider stronger infantry and monks for Indians as well when I decide to make their mod, so thanks for the suggestion. It’ll probably be hard to balance but I’ll give it a go.

Looking forward to more of your works!

If you want to design South or East India then use the Sunda Royal Fighter or Gajah Mada Model they fit well: 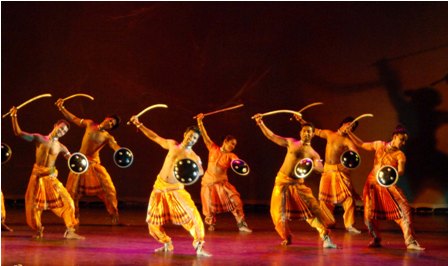 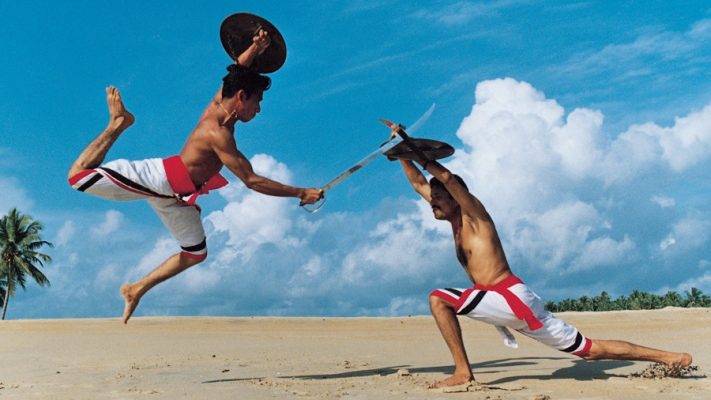 If you go for North or West India you can use the Eastern Swordsman as Rajput and give them some Gunpowder advantages.
(North West India= Camel, Armor, Gunpowder)

India is too diverse to be one civ

unsuscribe the text mod, and follow your step EXACTLLY again. still not work.

I unistalled the game, then downloaded again and reinstalled it, only to find that the text mod still didn’t work… 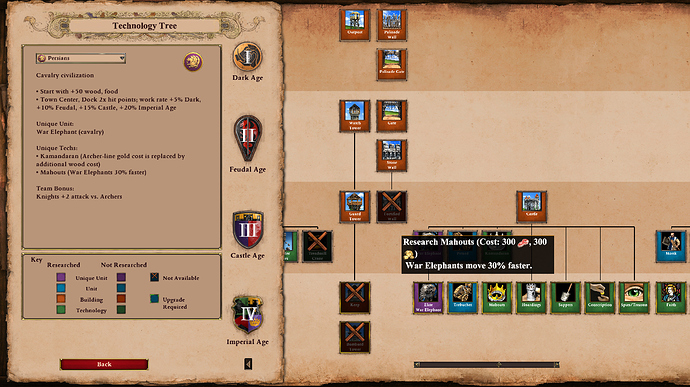 I know I said the priority won’t affect mod functionality, but could you try moving it up or down before and after restarting the game and see if that changes anything?

If that doesn’t work I’ll upload a video for a step by step install.

Are these for a potential Dravidian civ?

Persian in Mid Asian style is pretty good.
But Persian elephants were bought from India, I don’t think elephant units should be really needed or available to Persian, however the cavalry archer are worth to be more usable cause Parthian just came from Persia.
The war elephant is suitable to be Indian UU. It can be replaced with Aswaran Cavalry, and Zhayedan (impe unique tech replacing Mahouts) gives regeneration ability to Aswaran like the hero in Persian campaign.
I suggest giving Indian the war elephant in castle, battle elephant in stable and transferring the impe camel to Saracens, then fix Zealotry that camel +20HP instead of 30 for balance.
Maybe elephant archer and mahouts can be transferred to new South East Asian civ like Siamese?
Sorry for noob english, english is not my mother tongue.

Elephant Archer can be a regional unit for all Indian Civs, if there are more than one.

Battle Elephant Model ingame doesn’t really fit Indians or civs beyond it like Persians or Ethiopians as it is wearing a Hat which gives it South East Asian look.