I present my mod/design/pitch of the Korean Civilization, which is currently in beta.
For now, many Korean units are tokens that represents historical units of the Joseon Army. For example, I use the Yumi and Yabusame to depict the Korean foot and cavalry archers, the same applies to the Atakabune and Tekkousen, who are similar to the Korean Geobukseon (Turtle Ship) and Panokseon. I still keep many original unit names for the better understanding of new players, but I intend to change this in the future.

KOREANS
-Civilization bonus: Irregulars and Sentries can be trained from villages and slowly regenerate hit points, starting from the Commerce age. Can’t train cavalry until Fortress Age, but can train Rattan Shields (Fast Infantry) at the Monastery in the Commerce Age. Can get the aid of Chinese allies through cards and the Summer Palace.

-Korean buildings: Village, Rice Paddy, Monastery, Castle, Consulate, War Academy, Stable.
-Wonders: Confucian Academy, Porcelain Tower, Summer Palace, Temple of Heaven and White Pagoda. (Same as the Chinese)
-Consulate Allies: British, Russian, French and German. (Same as the Chinese)
NOTE: The reason why I use the same Wonders and consulate allies as the Chinese is because these mechanics are something difficult to modify.

-Historical Context: The Korean Kingdom of Joseon managed to survive and retain its autonomy despite the ambitions of several external powers for over 500 years.

Feel free to post suggestions, ideas, or critiques in the comments below (please, I need them). Also, my English is not great, so any corrections are welcome. This mod should work in any language, but with texts only in English. I also intend to add Spanish and maybe some others languages in the future.

Does the mod need balance?

What units should Korea have?

What changes would you like to see in this mod?

Example:
I like mixed civilizations, in a few words, for me, Koreans should be a semi-traditional and semi-oxidentalized civilization.

is the mod fun?

This Korean mod represents how you imagined this civilization?

what changes would you make?

Example:
I would change the age system and make it more similar to the African system and as I mentioned before, for me the units should be semi-western and semi-traditional

PS: Hope this helps the mod creator get some feedback.

I only hope the mod creator could remake style of Korean military units based on historical uniforms in future.

Some proposals and feedback:
-When we upgrade the hwacha, the name return to Rabauld (you can rename it “heavy hwacha” instead).
-it will be necessary to make a reskin of hwacha one day 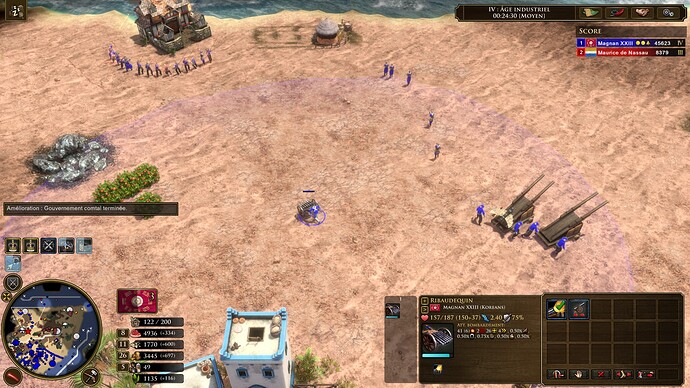 -You can rename “Atakabune” to “Geobukseon” (“Turtle Ship” in korean).
-I think the Tekkousen looks too Japanese. For me, I will remove this unit but give bigger bonuses to the Atakabune/Geobukseon. Or else replace Tekkousen with Fuchuan (even if Fuchuan has characteristics close to Atakabune).

-Technical question: Is it possible to rename Wonders and change their powers only for koreans ?

Hi guys, I’m working on improvements for the mod. Some people are asking for a nerf, so I’d like to know: What units or mechanics etc. should they be nerfed? I am thinking of raising the cost of irregulars, for example, but I am very interested in knowing your opinion. Do we need any other buffs? Would you like to see any other new units or mechanics? You can make all the suggestions you want.

If you don’t have concrete suggestions, you could at least tell me which units you think could be modified.

-When we upgrade the hwacha, the name return to Rabauld (you can rename it “heavy hwacha” instead).

-You can rename “Atakabune” to “Geobukseon” (“Turtle Ship” in korean).
-I think the Tekkousen looks too Japanese. For me, I will remove this unit but give bigger bonuses to the Atakabune/Geobukseon. Or else replace Tekkousen with Fuchuan (even if Fuchuan has characteristics close to Atakabune).

I’m currently working on several name changes, to make them more “Korean”, but I have some problems with certain units, for example I still don’t know what Korean archer and horse archer units should be named (In another post someone suggested that the Korean horse archer could be named “Beolmusa” but I’m not sure yet…). The Japanese Tekkousen looks a bit like Korean Panokseon, that’s why I’m including them. (Just google “Panokseon” and you can see…)

-Technical question: Is it possible to rename Wonders and change their powers only for koreans ?

I think I can change the names and powers of Chinese wonders, to make them more Korean, at least to some extent. Some wonder stuff is hardcoded so it’s hard to change, but I think I could make some changes. If anyone has any suggestions on this, please write it down.

I only hope the mod creator could remake style of Korean military units based on historical uniforms in future.

I might do these kinds of changes in the future, but it would take time because I’m not a 3D modeler.