I reorganized my bug/request list from last year. I hope Microsoft will fix them.

This would be a great option for all custom maps not just randoms!
|Thanks for JeHathor|

Wow! You put a lot of work into this bug report.

Unbelievable！why you can make it?

Dragon Turtle has no selection circle (missing dcl file)
(DATA) Serpent has -90% bonus vs Villagers, but only -50% bonus vs Atlantean Villager heroes. (Code considers only the last entry, set the bonus against heroes first.)
(DATA) Siege Tower can’t attack Hades Shades, Caravans, Ox carts, Relic monkeys, Golden Lions.
(DATA) Ulfsark Starting prevents Implode from detonating because it doesn’t have military unittype. Make it immune to Implode, it doesn’t suffer any damage.
(DATA or CODE) Remove ShowGarrisonButton flag from flying units, they can’t garrison at all. OR Make them able to garrison.
(DATA) Undermine (Invisible Ram in proto) does twice as much damage against Citadel Centers than against Town Centers. Use AbstractSettlement to define the negative bonus.
(DATA) Give military unittype to Caladria and it’s UI will show advanced commands like patrol. Hippocrates also has military unittype.
(AI) Atlantean AI gathers relics less effectively since patch 2.7. (an Oracle hero related line has been deleted, which caused crash)
(CODE) When a villager is instructed the build a drop site/TC/Temple, but other villagers finish it before the villager arrives, the villager doesn’t start to work automatically, when the distance between the villager and the building is too much in the moment of completion.
(DATA) Water Carnivora can kill the Argo instantly.
(DATA) Cataphract (Greek campaign only unit) has no bonus against Murmillo hero.
(CODE) Temporary techs remain permanently in-game, when the same techs used twice at the same time. Activate the Imperial Examination GP twice at the same time on the Water Palace mission and it remains active until the end of the game. It also work with Great Journey GP and with two Relics from the same type: 2 relics from the same type - unlimited effect - YouTube

Microsoft should just sent you a pay check and access to the game files at this point to fix all the bugs you already identified for them.

Good jod Chickenland1936. I hope the devs fix these things too.

20211215211354_11920×1080 378 KB
(CODE) Bronzed soldiers don’t benefit from hack/pierce armor related techs, when these techs activate during the god power. They get the effect only when the god power ends.
(DATA) Funeral Barge doesn’t grant bonus against Ghost Ships despite of Ghost Ships are classified as archerships in the proto.
(CODE) Citadel transformation shouldn’t break training and researching. (Accidently preventing an ally from aging up is not nice.)
(MAP) Marsh and Watering Hole maps have no free Settlements, when the number of players is 12.
(AI) When all 11 AI players are Greeks, one of them is called “player 12”. FIX: Reintroduce an unused greek AI name for example: 20750 “Delphi”
(CODE) Modded “aomxai010 standard” and similar files cause a crash to desktop on startup.
1 Like
Chickenland1936 January 27, 2022, 6:51pm #11

(CODE) After Kronos uses Deconstruction on the active Market, all Caravans heading to that Market stop despite of the player has more than one Market. When the Market dies normally, Caravans continue to trade with another Market. (You can time shift your Market to test, it has the same result.)
(CODE) Autoqueue should check the buildlimit prerequirement before the resource prerequirement. Example: Buy a Chiron unit and a Villager and press autoqueue button. When you have enough resources to buy another Chiron unit, it disappears from the train section because of the 1 build limit and TC continues to produce only Villagers. When you don’t have enough resources, the Chiron unit doesn’t disappear (until you don’t have enough resources) and the villager production stops.
(CODE) Fake gather points:
Select 2 unfinished OR 1 unfinished and 1 finished Barracks and set a gather point. A fake gather point is visible for unfinished Barracks, but it doesn’t work. Happens with all buildings.
Select 1 unfinished Barrack and set a gather point. You can’t set it, there is no fake gather point like above.
(STEAM WORKSHOP) Steam offline mode removes all of your subscribed mods from your machine.

(CODE) Attack boost ability doesn’t affect ranged units
(CODE) Units with special attacks don’t look for new targets, when they attack without command
(CODE) When a Town Center is under construction by an unit without economic unittype (every norse infantry unit expect of Ulfsark Starting), the player is unable to delete the TC.
(CODE) Units with minimumrange stuck, when they are pushed to the edge of the map and can’t retreat without player intervention: 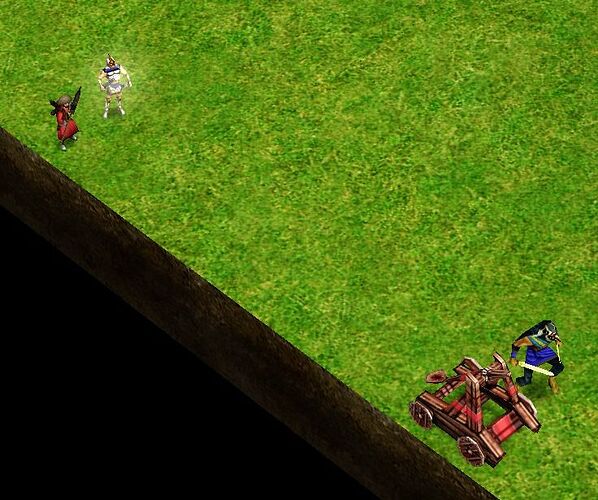 minimumrangestuck736×615 89.8 KB
(CODE) Units with rangedattack lose all of their previously gathered aimbonuses after every special attack.
(CODE) When a TC dies, villagers carriing resources to the TC, don’t look for new drop sites immediately. First they go back to the location of their tasks (it’s a waste of time). When other drop sites die, they look for new drop sites immediately.
(CODE) Some cheat codes like O CANADA don’t work, when the player has only Citadel Centers.
(CODE) Citadel Center GP can change the location of Pharaoh respawn.
(CODE) When a villager carries resources and heading to a drop site get attacked, the villager goes back to the location of the task instead the drop site after the attack finished. For example the villager carries wood to the dropsite, get attacked, attacker dies and the villager goes back to the trees despite of it can’t gather more wood.
1 Like
JeHathor June 25, 2022, 7:15pm #13

I’m not sure if I just missed it on your list… but the AI is not able to claim settlements that have not been placed on the grid (e.g. when you place them manually via the editor). I suspect the algorithm only uses Int values instead of float, leading to a missmatched building position.