Rushing is dead, get rid of Commerce age and save us time

Everyone is FF’ing so why even have a commerce age? Devs are intentionally making age 3 like age 4.

They are encouraging camping, they are nerfing rush civs and discouraging rushing altogether. Now the meta is to FF or FI with the goal of only fighting at age 4 or only after 20 or 30 mins of building up your base. Seriously why even have commerce age if rushing is dead?

Long story short Devs are turning the dynamic and interesting Age 3 gameplay into the predictable camping snoozefest that is age 4, which is why I’m about done with this game after 2 years and many fun times.

yeah agree even if there are civs with good rush (Ottos, Haudenosauneem, Inca nats strat…), everybody is just making FF o FI or heavy turtle, but beside that the dead “Rush/Hard rush” is not the problem because tbh rushing was also bad strat and lamer just for low ELOs; same thing as FI o FF just in the opposite side, the thing is “smart” age 2 game play is dead.

Well put. Its like Industrial laming instead of rush laming. But I will say I’ll take a rush over fast industrial laming any day. At least with the rush its exciting and a skilled player will overcome it.

Completely disagree, if anuything they are nerfing turtling and defensive play considerably. So many town centre wagon cards removed, town militia nerfed, xp from building town centres nerfed, building hp moved to age 4 etc etc. The meta might have moved to a greedier style of play but the devs have done a lot to make turtling in particular a lot weaker, just look at how many nerfs inca have received, they had their building hp changed to a team card, they used to be able to have about 12 town centres lol.

Wow two great posts in the same 24 hr period. Your on a roll.

i love your comments ngl XD

totally agree with you. All you see is Spain FF, Otto FF or Otto FI into Revo. Mexican Revolutions, Aztec FF, China FF. Italy FI, Nobody plays Age2 anymore and if you play Age2 you are at 80% automatic disadvantage.

The current meta of the game is terrible.

I do agree with the idea that the devs has been trying to nerf camping, but the meta has also moved to a more FI direction, sorta since Mexico came out, arguably due to how strong the rushes of the african civs were at launch (the terror of the hausa rushes were such that there is a vid of a counter strat with haud where you use the snipe ability to kill the african cattles)

So the player base has just developed a lot of tools against early aggression and you since only a select number of civs can play extended age 2 ( brits, india , japan, swedes maybe russia) you will see more FF and FI.

just remembering back to this post which is a meme but alot of these events did happen, the meta has basically shifted back and forth alot even in just a year

[calendar2021] Well, I finished the calendar and decided to remaster it. I think it was better than the other version made in paint. I want to clarify that I wanted to do this post later, but hey, I have to go on vacation, so I publish it now. Now, a brief summary of what the year was like. January: Sweden was the most OP that existed, especially the griddy boom of blueberries, carolean, svea guard, infinite mameluks, etc. The 12/10 French was very popular, and the cuirassier was a machin…

The rush is still a viable strategy, many civilizations no longer execute it because they know they have an advantage in other ages also for other changes introduced in the game and new mechanics, some new civilizations defend themselves well so the strategic option has moved to 3 and 4 age mainly because many do not rush or more and know they are not very bothered while executing their strategies. Some civilizations that had an advantage in the rush have been broken in this way and are in fact little played.
Many times, however, the rush concept is confused in all in rush and hard rush where they are strategies that at low levels can work but at higher levels do not work because they know how to block a rush all in and then have no way to recover to continue the game, the rush is a continuous pressure to induce the opponent to do things he does not want and to consume resources to make buildings that he needs for example houses and keep him in his base (even if some civilizations do not need a map much).

I actually got rushed by Otts today. A very rare thing.

This player only had 9 games under his belt. Apparently he never got the memo.

Thats what im saying man. Espcially with Mexico. They are so OP especially with Soldado being S tier. But yeah The devs keep making the meta turtle and FF and FI

I mean you just proved the point. That was an inexperienced player. Experienced players who win know better and don’t do that. Also, can I ask did you win that game or lose? I’ll bet you beat back the rush aged, up, and won.

Also the point of the thread isnt “rushing never happens.” It does. The point is it fails in most cases because the devs are discouraging it. If this wasn’t the case how do you explain Mexico, Italians, and Malta all based around a turtle FF or FI? 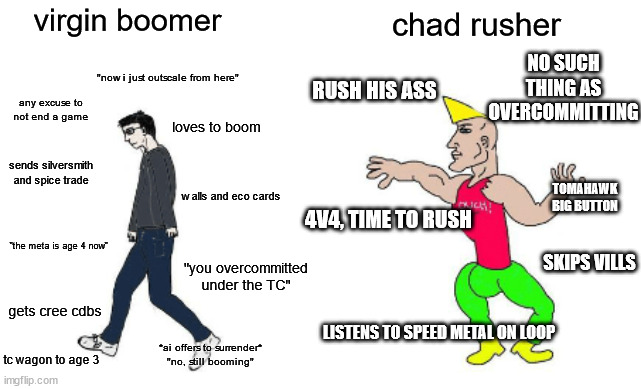 Let me just guess what civ you use and your elo…

Lol, I’m not sure that’s right he had 9 wins and one loss and was 1450 rated. Perhaps returning to the game or a rarely used alt. Who can say. Definitely not a noob though.