Screen and game freezes in MP or SP; happens occasionally after Novemberpatch

In a rankend or unranked game (mulitplayer as singleplayer) the game sometimes just freezes. Music still plays and i can move my mouse but the screen is frozen. If i try to click anything or use a hotkey nothing happens. Only the spinning blue circle of windows appears. If i click more often, the screen get a slight white fog and a window pops up, that the programm is not reacting, and if i want to end it. To click “yes” is the only option to get out of the frozen screen. Of course Aoe ends and the game i just played is lost.

Before the Novemberpatch, i had this issue not. A least not really noticeable (might be happend two or three times in 300+ games).

I would like. But unfortunately i cant find the logs folder a doc from today, where it happend in my last game (latest doc has the date from yesterday). Maybe there is no doc, if the game is ended by this? I dont really know which of the other docs include a game where this issue happend .

I made a screenshot, but u cant see anything on it. Its look like a normal game screenshot. The only sign, the spinning blue circle of the mouse - is not seeable: 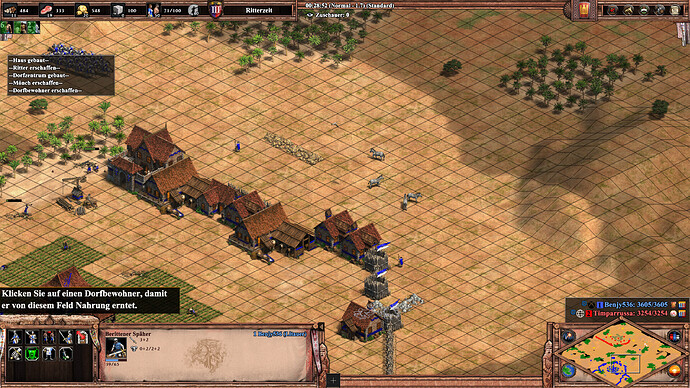 I just registered on this forum to reply to this post. We’ve been experiencing these crashes too since the last patch, exactly as described by OP.

After the crashes started I’ve wondered if something was wrong with my operating system, so I bought a new 256GB SSD drive and upgraded to 1x8GB DDR3 RAM (and removed the old 2x2GB modules).

Then on a brand new windows 10 install, crashes kept happening. CPU temperatures are OK during and before the freezing (I thought that it might be CPU throttling issues so I monitored that).

Unlike the frequency OP commented, we’ve been experiencing this crash pretty often, leading us to restart from saved game even 3 times on a single match.

Crashes occur on both single player and multiplayer modes.

AOE2 Benchmark gives around 1070 score, more than my Macbook pro late 2013 which gives around 960 but without any sort of crash.

I hope that AOE devs find out this bug which I tend to think is happening on older processors or graphic cards I think. It’s been pretty frustrating to not be able to continue some games because the game starts to freeze too often that we just give up.

I literally went out and bought a new pc just for this game when DE came out.

Had stable performance for most part of the year, but then anniversary patch came out and it’s basically a power point at 38 minutes into the game, frequent crashes to desktop without reports, super laggy user interface when in lobbies. Multiplayer red clock even though GPU / CPU usage is low.

I’ve switched networks to rule out ISP. I’ve gone through all their recommendations for improved performance. And nooooo, herrrr derrrr it’s not running on my dedicated cpu graphics…

Same thing happens with me in campaigns I’ve played. 100% of the time the game freezes for around 2-5 seconds every two or three minutes. Incredibly frustrating even in campaigns, I can’t imagine what it’s like in MP.

Thats also annoying but I think thats a different bug: Your bug is in every game, mine only in 10-15%. Your freeze is just temporary, mine permanent (de facto the game is over).

In the last recent 19 games (after my post here), i had this issue 3 times. Luckily one time only after the game was over (when i was looking over the revealed map).
Additional I had this once in a recorded game as well!

So my guess is that this is a graphic issue?! I dont know. However, it occured for me just after the Novemberpatch.

Exact same thing here, like 30% of the time… Never happen to me before november patch.

Its starting to get so frustrating that I’m done with this game until they fix it.

Hey guys, its me again. Issue still happens. I count 10 times in 60 games (luckily 4 times in the after match screen only).

Anyway, i try to upload the logfile from that day. I have no clue if this works and - of course - if anybody can see with this file, where the issue could come from.

I really hope, that this will be fixed, the sooner the better…

Same problems here. Every game freeze in multi-player. VS KI I have no problems. So annoying.

Is it really the same? It happens to me ALSO in games against the AI.

Are your freezes permanent, like mine? So you can only end Aoe DE and the game os over? Or are it just temporary freezes?

It’s permanent in every mp game after 10-20min. I can look around and can go in menue but my units buildings are freezeed. I buy the steam version Today maybe that works.

Ok, thats interesting. I cannot go in the menue or looking around (i. e. i cannot scroll on the map), when it occurs.

Tell me if its working with steam as i have the x-box version too! Would be kinda “funny” if this causes the issue.

Deleting all files in my %temp% folder fixed my problem.

I ordered a new graphics card (AMD RX550) to get rid of my old graphics card. I’ll provide updates whether this fixes the issue without changing any other stuff.

Re-installing windows on a different drive didn’t solved the problem either. I’ve also changed RAM memories to bigger ones (from 1x8GB to 2x8GB different model - both 2 installed memories are new).

Hi SneakCorn,
for me its also the same (did not notice it after the last patch, but i have played just a couple of games on it ). I did not change anything, just enabled v sync, but that did not helped. I think it is even more often than the estimated 10-15 percent, but at least still some on the screen after the match.

I hope with every patch that it will be solved. Anyway, at least the game is still playable “enough” for me even with this annoying bug.

Hi guys,
honestly I think that the last patch (March 2021) has changed something.

So it seems to get better. I’m curious how it will be after the April patch, which should come soon. Will diligently keep statistics…

Means according to deepl:

To this day (June 9, 2021) I am still experiencing the same problem, maybe to a lesser extent, but it is still tedious, especially when I am in a multiplayer game.
Another problem I’m experiencing, is the disappearance of the sheep, or the militia. I have already sent my complaint to tech support, BUT I STILL HAVE NOT RECEIVED A SOLUTION!

I continue to experience this also. Now in 101 games 7 times since the last patch. And again, often (4 times) after the game, when the map is revealed. In this respect, it’s quite ok for me, even though it shouldn’t really happen.