Sacred places
I only saw Delih win by Sacred places, in the tournament, Capoch did not manage to win, by Sacred places, by five seconds
Proposal: Make the loss of Sacred places pause the ten minute counter but don’t reset it, the first to run out of time wins (if you consider 10 minutes too short set it to 13 minutes)
Note: Not similar to coh, in coh it is enough to take two out of three places

keep and walls
Keep has a very high DPS since its attack speed is less than a second so it doubles its damage
Proposal: Decrease its stats in Castle age and return it to Imperial age with a technology
Proposal: Consider the HP of walls and palisades and their build time (siege has been heavily nerfed) 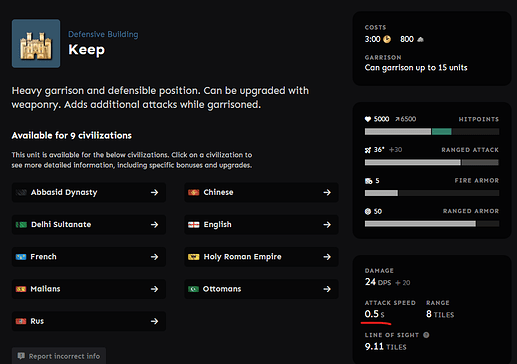 Walls and keeps need to be nerfed HARD IV - Discussion

Walls and keeps need to be nerfed HARD IV - Discussion 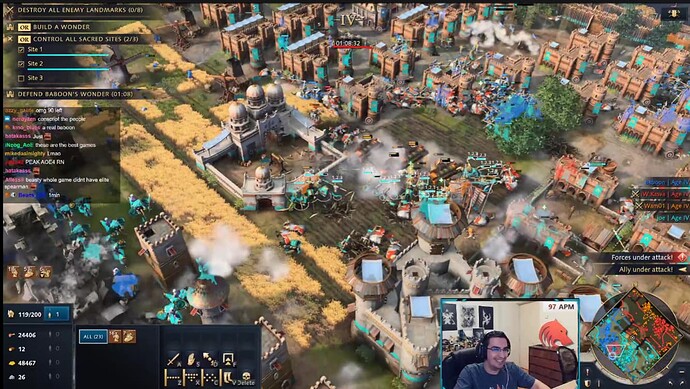 What’s the problem with the long games? This is age of empires not StarCraft.

Oh, is it landmark? I thought it was wonder, but I haven’t played that much AoE4. Also don’t care about watching the vid.

context: RB selected seed for games to be short.
So “even” 30min games - is artificial.

The pace of the game is OK - IMHO.
It was fun game overall, but waiting 1-2 minutes, while units travel through the map? why?

my suggestion: speed up ingame timer.

What’s the problem with the long games? This is age of empires not StarCraft.

All these suggestions to further move the focus towards eSports are extremely bad takes. AoE has never been a fast-paced RTS and only AoE 4 has tried to rush games.

Longer matches in AoE are normal. Changing one of the defining characteristics of a game is like telling your significant other “I’d love you more if you had green eyes”.

Longer matches in AoE are normal

if they interesting - yes. But if they is exhausting and a lot of match is finished cause wood is limited. It’s boring.

That’s what we are talking about. It’s the same question as “how large maps should be”, “How many resources on the maps”. etc.

For me it’s valid questions.

also for me pace - is Ok, but if devs speed up ingame timer +30% would be even better. All events will be e little bit faster.

but if devs speed up ingame timer +30% would be even better. All events will be e little bit faster.

Disagree. I have tried again and again to like StarCraft. Unit responsiveness is great and all, but it’s just too fast and chaotic for my liking. I don’t enjoy playing because I’m always so busy trying to keep up. It feels like it plays in fast forward. It’s the same difference of taking a leisurely drive on a Sunday or being late and running all red lights. The latter is not enjoyable at all for me.

That’s why I always come back to the AoE franchise, the cadence is just right. If you “speed it up 30%” you will lose a significant portion of players, especially the oldest, most loyal ones. You may get some new ones from SC and such, but if that’s your kind of game, there are better RTS out there.

To real compare - there is setting in some mods(may be advanced or another one) which speed up ingame timer x1.5 etc.

General feeling and pace of the game will be the same.

nobody in aoe2 noticed or comlained. x1.5 → x1.7 =+~13%
It’s the most hidden change, that people wont even notice, cause buildorders + timings will be the same.

PS As another advantage of 30% - one played 2 games in the day, but now he can play 3 games. What reflects on queues.

Actually, I have another idea:
allow rams to be build in siege workshops, for faster clearing buildings.
and you can pre-build(!) it if you at 200 pop-limit.

Personally, I like that matches last longer (Or at least 3rd age in ranked games), as you can use “Everything” of a civ’s repertoire, including unique 4th age units or unique techs that make your army stronger. Many times I prefer play 3vs3 or 2vs2 because these games do tend to reach 4th age, and 1vs1 when I tried to improve my rush abilities.

In Age2, something that bothers me in ranked is that almost all the games end in Feudal or three and four minutes from advanced to Castle Age; and because unique units are only unlocked in Castles, the fights end up being “generic archers vs generic archers” or “generic crossbowmen + catapults” vs the same.

In Aoe4 there are civs with unique 2nd age units, and even “early units”, which gives more variety to the matter. On the other hand, I also appreciate that the knight has the utility that he supposedly had in the “Middle Ages”, now it is understood why heavy cavalry was so feared at that time.

Of course, if I agree with something, it is that the time to destroy some cities, especially to persecute villagers and prevent them from rebuilding, can be monumental. I would suggest, also to give some civs more variety in their combos, give each civ some unique shock troops or mercenaries, and that these have as a base characteristic greater damage to buildings, or bonus against villagers, or earn money when they kill villagers They would be interesting mechanics. And such troops exist (Almogavar, Free company, Routiers, Condottieri, Gentlemen reivers, Akinci, etc). Of course, this could change the entire mechanics of the game too much and many things would have to be rethought, but hey, it happened when Age3 invented its 5th age, and in age 2 the Hussar and the Halberdier appeared.

Personally, I like that matches last longer (Or at least 3rd age in ranked games), as you can use “Everything” of a civ’s repertoire, including unique 4th age units or unique techs that make your army stronger. Many times I prefer play 3vs3 or 2vs2 because these games do tend to reach 4th age, and 1vs1 when I tried to improve my rush abilities.

The changes are minimal so they won’t affect the length of average Elo matches and team matches will still be long.

Not a single map in Wololo was a closed one, because the vast majority enjoy watching and playing open maps that don’t last so long, but as I already mentioned those small changes will not affect the average Elo, they will continue to last as long as they usually last 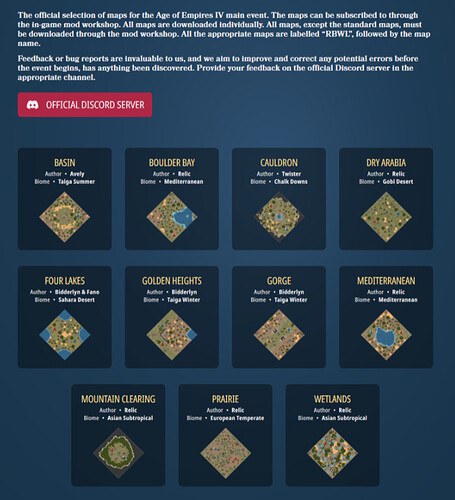 What if we cut the resource amounts scattered near player bases and around the map by like 40%…i mean farms not costing wood to reseed is also a major game time extension. I think if theres less resources, theres less need for 130 villagers. If villager count meta was like 70-90, then armies would be larger, but reinforcements wouldnt be constantly reinforcing frontlines…

Reduce the amount of available resources, and youll reduce game time…? Perhaps? Once an army is wiped out, and theres no more resources to reinforce, surely the gg will happen?

Thank you for contributing, I trust you will analyze our proposals and make the best decision

All these suggestions to further move the focus towards eSports are extremely bad takes. AoE has never been a fast-paced RTS and only AoE 4 has tried to rush games.

As Beasty sad - its just map pool impact. As I remember, medium time of map was around 24. On previous map pool it would be +10m easy.
Sound even faster, than I would like