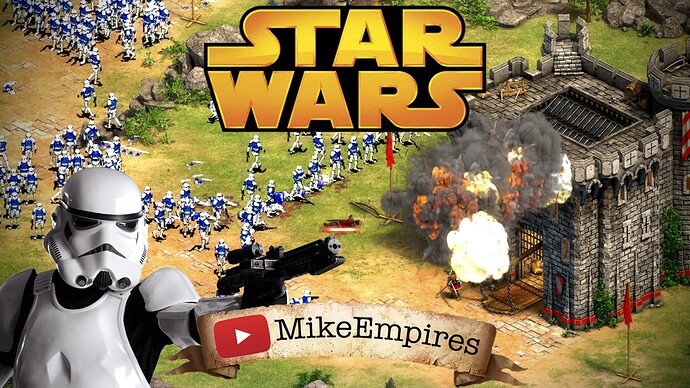 Hey, everyone. I’ve been working on a Star Wars mod for AoE II: DE. It’s now ready to be downloaded and played. It’s funded by gamepwn, which specifically requested that I worked on this mod, and the other supporters of my work (channel members and patrons). I’ve finally released the first version of the mod.

It brings units from the Star Wars: Galactic Battlegrounds game into AoE2DE. The first version contains the Stormtrooper (Tech Level 1, which is the equivalent of Dark Age in that game, so it’s the weakest version). It can be trained in the archery range. It costs 35 wood and 25 Food. It also has bonus against cavalry. 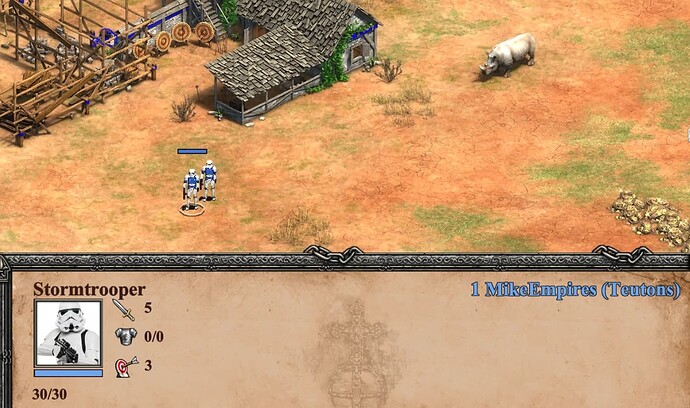 The full experience is split between two mods.
The cosmetics mod, which includes units icons and other cosmetics is called “Star Wars Mod by MikeEmpires [icons]” which you can download here:

The data mod, which includes the stormtrooper graphics, is called Star Wars Mod by MikeEmpires, which you can download through this link:

I’ve been working on mods for a long time, but I’ve only released a Smaug mod by accident before, so this is first intentional first time releasing a mod. I’ll keep working on this mod, and the Stormtrooper Tech Level 2, 3 and 4 will be included. I’ll soon release an update with the rebel trooper so both the Galactic Empire and the Rebel Alliance are included.

To showcase the unit, I’ve already done a “Stormtrooper vs EVERY UNIQUE UNIT” video, which he fights non-upgraded castle units, since he’s a “dark age” unit. Another showcase for massing stormtrooper is in the “How Far Can 200 Stormtroopers Get in William Wallace Campaign?”: I hope you guys enjoy it. I’ve wanted to do this for a long time. So, thank you gamepwn for making this a reality.

Here’s a video compilation made by gamepwn of the Star Wars mods I’ve made for AoE2DE (not yet included in the mod): Please tell me Stormtropper has below 50% accuracy

@Martinurello
Hahahaha, The stormtrooper has 60% accuracy. Same as in Galactic Battlegrounds. Not Arambai level, but not good either.

the mouse said no from what i last knew.

I didn’t see your post before looking for SWGB forum content today, but if you’re still interested in the idea maybe Mike could use a collaborator?