DESCRIBE THE ISSUE IN DETAIL (below). Limit to ONE issue per thread.
There is no way to play RANKED Treaty 10 min, 20 min, 30 min, etc.

It is only possible to play ranked Treaty 40 min. It has been like this for all players since launch.

There needs to be a way to select the treaty time you want to play, each is a distinct game mode.

Another fix could be to allow ranked games in custom lobby.

What actually happened (what went wrong) because of the issue you’re reporting?
The function not possible. The feature is not implemented.
Unable to play treaty 20 ranked, etc. 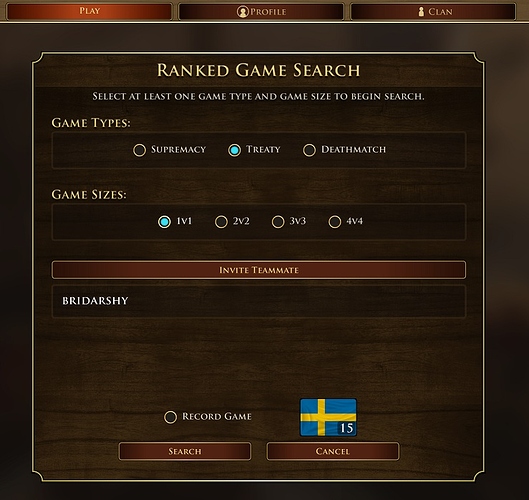 Forgive my ignorance of treaty games.

Is there a standard or most popular treaty length that treaty players use which could be the default for ranked games and it is different than the current default of 40 minutes? The more settings in the ranked game search, the longer it will take the player to find a match, but if the treaty playerbase is willing to make a compromise for a default treaty game length that would be ideal because it would not require fundamentally changing how the ranked matchmaking service works.

Another option would be for ranked matchmaking to search for a player preference first and then if a game is not found, the search would open up over time to include other treaty lengths. If a player is searching for a specific treaty length are they more likely to accept a treaty length longer or shorter than their preferred length? This would help program the matchmaking service.

If not allowing ranked in lobby, then implement checkmark box for each time. Default to all and all deselect what you don’t want.

There is very big difference between them. You can’t pay me to play nr 30 or longer. Only interested in 20 or 10.

I agree 40 minute treaty is terrible. I typically play unranked at the moment because I prefer the 10 minute treaty gameplay over all else. I don’t mind the 6, and 7 minute rushes that happen in most regular ranked games, but I tend to have more fun when everyone can set their strategies in order first. Someone who has 10 minutes to set up can potentially do a fast age 3, while he may not have an army he is now at an age advantage, and given a few extra minutes has a better chance of winning. However if the other player rushes right at 10 minutes he will likely lose unless he has a teammate that can assist him while he gets his cannon/T3 units ready.

It just opens up the game a bit more in my opinion.

10 min treaty is the cheat used by supremacy players to get better rank at treaty . 10 min treaty has no mechanism of treaty . It’s just basically rush game with protection from super early rush

I doubt they’ll fix any of the ranked custom game concerns.

Casual Game Lobbies: We are continuing to look at improving what information is provided in casual game lobbies, including player stats to help build out even teams.

translated: ‘we hear you and will monitor it but we disagree’

There are also some problems with 3v3. Details below:
NOTE: I am not asking for quickmatch to be removed. I think quickmatch is great for 1v1.

Problem:
Ranked has been stripped from custom games.

The reason this is a problem:

A) Make the teams fair. E.G.two Port/Japan players on the same team is an instant loss in 2v2/3v3 situations against competitive players.
B) Customise the map: Most of the maps have food far away from the TC, which encourages rushing. Only certain factions are good at rushing(otto, india, russia). This means for competitive ranked you HAVE to play a faction which can rush or hunt villagers with hussars. There is no counter to this strategy; there is a ‘age 2’ meta which has no work-around on most maps.

Solutions:
A) Add ranks back to custom games.
B) Add in ‘must be X rank to join y lobby’ option. This will prevent players joining the wrong lobbies!

Arguments against this:
Q: You shouldn’t be able to see your opponents civs ahead of time.
A: In 95% of ms+ or lt+ lobbies the teams would be random, so you can’t predict. You would only split double factions, e.g. double port.

Q: Leads to Stat Padding
A: People are going to smurf in quickmatch the same amount
A2: You could hardcode in ‘can only increase by max X mmr per match’ to counter this anyway.

Q: Quickmatch makes the game more competitive.
A: It does for 1v1 AND a small minority(mainly new) players which don’t mind the dull/repetitive meta of age 2 otto/india/russia/rushing or hussar/sioux villager hunting.
A2: The real competitive part of aoe3 for most people was 3v3 Deccan or GP, either of which we can’t solely search for now!

Q: People don’t want to play 20min games!
A: In LT+ or even MS+ games, I would say a good 80% of the time people still rushed but the great thing is you could counter with walling/turtle or just having really good timings against their rush. This made all the factions competitive except maybe Spain and Inroquis. Lead to really fun and dynamic games with lots of variation.

Q: Treaty sucks, they should just ‘get gud’
A: I never played treaty, but why should anyone tell people how to enjoy the game!

Q: Ranked custom games will lead to people getting kicked.
A: Add in ‘must be X rank to join y lobby’ option

Q: Why make Custom games Ranked, I want to play casual
A: Sure, Add a ‘unranked’ opion when hosting a game!
A2: I know for certain a lot of people will enjoy being able to abuse a lack of MMR in any game, so be careful what you wish for!

There is arguably no difference beetwen a treaty 40 minutes game and a deathmatch after the initial 3-5 minutes.

25 min is enough to go imp plus almost all techs for example with brits. 40min is a snore fest.

I wish they gives us more optioms
Let the Super noobs play 40 minutes.

This really isn’t applicable. With DE they just axed 3 game modes by not implementing the simple ability to chose TR ranked time. TR 10, 20, and 30. Unacceptable in my opinion.

This is a spurious argument and an over-simplification that shows a lack of understanding of the strategies and differences in the game modes.

If you consistently win at TR 10 or 20 against other similarly ranked players then you’re better at that mode.

You don’t need to combine the ladder for all TR time if this is such a concern. You can have TR 10 20 30 40 ladder separate. Again not hard to implement.

Part of the problem with QS is that as you create more modes, it divides the amount of players.
Unfortuneatley MMR also splits players up.

This double splitting, especially in small multiplayer games like DE are a huge problem, I suspect the devs are concerned that ‘splitting’ too much will make the queue times unrealistic.

This is also likley the reason they don’t want to add in ranked custom games.

its jnot splitting the mmr , its like one player can have multiple mmr

get all upgrades in 25 min with army , and i will publish ur boom on youtube , bneczo it never happened before

The concern of this splitting the pool of available players, and lengthening wait times is resolved by allowing multiple game modes to be searched at the same time. I also don’t buy the argument because the system as it stands forces everyone into TR40 if they want ranked TR. I don’t care if there is longer wait time for ranked TR 20, I want to the option.

Let’s say I’m ok with playing Supremacy, TR10, and TR20, in 1v1, or 3v3. Then I should be able to search all of those game modes simultaneously.

Most of the community of NR 20 players I know have no interest in TR 40, so this idea that you could just put them all on the 40 pool and they would be okay with it, like all TR is created equal, is ignorant.

I was extremely excited for DE to come out because I was looking forward to an active game again, and being about to find NR 20. I was a top player in that mode, so I will never support this not being implemented.

Not all upgrade but all exo upgrade including capitol, mill, facroy and estate plus imperial dragons, some arsenal and church techs.

The trick is to pick brits, boom all the 20 manors with the cheaper Manor card, then go without creating any villagers in beetwen directly in succession from age 1 to age 4 and immedietly sent the card that let’s you train villagers from houses. With this you can forgone building any TCS.

After capping out on vills that go imp directly and get eco upgrades.
Now the time should be around 21 minutes.

Get cav training card out and spawn dragons from one stable.

I did this last week on Great plains but granted I only used to play, aoe 3 nilla because I despise the design of expansion civs with auras, wonder abilities and magic dances.

That’s why we need different rating for different modes .

In tad tr10 was the cheating used by supremacy players to get top rank in treaty ranking .

Yeah…why writing nice when you just can declass other players as noobs cause they just love a different play style.

I am playing AoE for decades now, most of the time offline vs AI, with no clue of “how it is played online”. As aoe3 came out I startet playing online and found out that I just played “No Rush” all the years before - without even having a “name” for it. It is just my playstyle and I am not a noob at all. And so are many other treaty 30+ players as far as I know. They just do not like to rush…

So just stop saying “Treaty” is for noobs, wrong or what ever…same goes for the right amount of treaty time. Let treaty 10/20/30 players play treaty 10/20/30 and give them the choice in ranked games!

Most people I’ve spoken to who have played the game online before the remake have expressed reluctance to play or buy the remake mostly because of this issue and due to qualms related with quicksearch being the only way to play ranked etc.