The Keep and Barbican in the face

the developers will make the decisions

Your point of posting irrelevant screenshot?

From steamcharts AOE4 has 5.450 players hour ago so you got there 0.31% of voting. How exactly do you think thats anyhow relevant to anything? Maybe all your friends voted “i dont like” and you manipulated the results?

If you want your voting taken seriously get at least 1k ppl to vote it and then we might have some sort of argument here but even then it would be less than 20% of players based on steam charts participating your vote but it would still be 1000000000 billion better indicator of anything than mere 17 voters.

Also not liking something is completely irrelevant to balance. I dont like playing against Rus, english or french. Am I making polls and asking to nerf them to ground? Nope 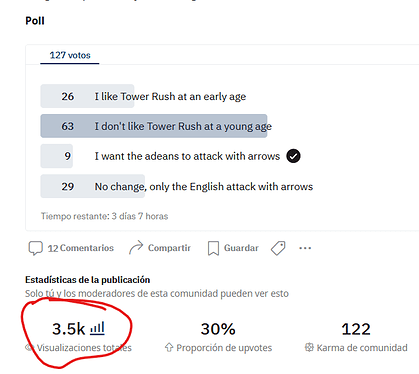 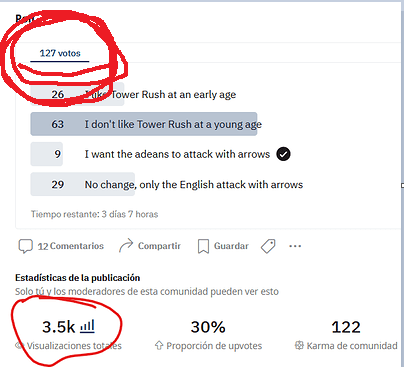 Congratz you failed again to prove your point.

127 votes which is hardly representation of anything just because it has been seen by 3.5k it means just majority doesn’t care or bother voting it. 127 is 2% from 5450.

And once again. Not liking something is irrelevant to balance. Balance is when there is enough counterplay / measures for opponent to deal with it and not just insta win button. So once again I repeat. I hate playing against rus, english and french. Do you see me trying to make polls to ask nerf them? No.

Asking for rework because something is unfun is completely fine suggestion, but nerfing isn’t especially when majority of players who feel TR is too op are ppl who make massive mistakes and lose game because of it and not because of strategy

do your own poll if you think you can reach thousands of votes. The data of the community and the little interest should be worrying, so it is not him for the subject, try to make a survey that thousands vote if you can. The community is medium level and they are casual and without community the game dies, definition of madness “do the same and expect changes” 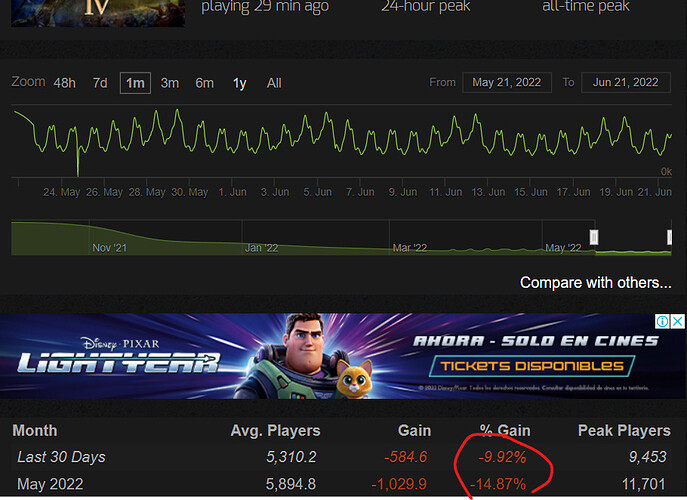 This is not question if game dies or not. Poll is unreliable and those its irrelevant to make.

Most casuals look for PvE experience not PvP. Game offers very little PvE so most casuals move away from it and because devs screwed up with the release more the numbers plummet.

Yes players are allowed to feel that something is unfun to play against and some cases rework might be important to do to make the game be more fun, but now we’re talking about nerffing something and not reworking which are different stories. Nerffing or making tower rush something that is not worth ever doing results again one strategy going away. Adding more counterplay to TR would be right answer.

For example villagers dealing more dmg to towers when towers are build. Could be decent solution this way if tower is already build defensively it wont be impacted but TR becomes more costly for aggressor to do because they have to invest more to keep tower safe meaning they have to start towering from further.

Game has already moved lot toward one dimensional play where every civ is super predictable and everyone does only one thing especially in TG’s (2v2 point). Whenever I personally get TR, I feel excited that finally something different from same ■■■■ that everyone does and what is even worse when opponent has no plans to do anything other than trying to build walls and stay behind them for 30mins which creates most unfun experience I can have with the game.

Also many players find it unfun because they don’t respond properly. They lack ability to scout and understand what to do against TR. At highest level when mindgames come into play its quite different story which again is completely irrelevant to us lower plastic league players.

Again since you @HasanIchess want to use the average player as the measuring stick (silver 1? Bronze 3 before patch)? Then the BBQ SHOULD translate to WINS in those ranks?
Bronze rank

Bbq appears to be potent in the 5-9 min window, but any time after that china has less than 50% win rate? Which clearly suggest WHATEVER collect strats the bronze level player is executing IS NOT WORKING beyond the 9min mark. You don’t see 50% again until the 45-49min games???

I can’t understand why the ANNOYING BBQ/TR from CHINA would be precieved as too strong???

I also posted about the Mongol rush in the dark ages and the keep in the face, and I think that weakening the keep or the outposts is not the way to go

Anyone can vote on reddit, there is no elo restriction, and I don’t think very low elos are constantly on the forums really

Anyone can vote on reddit, there is no elo restriction, and I don’t think very low elos are constantly on the forums really

What do you consider low elo? Because I can tell you rn most of us are in the bracket where balance hardly comes into play and is not related why we lose. Im not personally at level where balance is always issue but my own mistakes or my allies mistakes are the reason why game are lost.

For example today I had game on danube river where my allie positioned his army to side and waited till opponent at imperial age (HRE) pushed all his MAA/spears into my base and was left to defend it meanwhile he went for counter dmg. I was able to barely hold it but took considerable amount of dmg. My ally lost all his army and did nothing to opponent.

After that we got pushed away and kept on our side of map which would’ve been fine but next engagement we were able to defend even when I had very little to bring to fight but next push was issue. My ally had 3 racks and he was HRE. He was last to reach imperial and when the game was decided he had 2 mangonels and like 12 MAA meanwhile I had been able to recover and produce +45 lancers and kept buying time by letting my base get destroyed while my ally produced from 3 racks 3 units at time and same rate he kept losing those units so before I left he had 1 mangonel and 6 MAA, meanwhile opponent both 50-60 army supply. I could’ve taken one of them head on and wipe them but not both.

So yeah even with the pressure I provided with my fast castle and tried to help ally to get more relics he lost relic war and was last to age up to imperial with no production whats so ever. If you reach imperial and all you got is 3 racks to produce with then its players own mistake and bad play that caused the loss