Hey Everyone! Thanks again for participating in the screenshot contest! There were so many fantastic entries. I guess the online image poll I tried to use has a cap on how many people can vote. So I am taking the top 4 images and posting them here, and saying that the voting is officially over!

Sorry the voting didn’t go as smoothly as hoped. Relying on free to use online image polls was a lot of work and it ultimately didn’t offer the flexibility I was hoping for. I think for the next contest, I will just post the finalists in a thread here with one image per post, and people can simply vote by Liking the images. But if anyone is dissatisfied, I’ve added each image a separate post here in this thread, so people can Like the images and we can see which is unofficially crowned the winner of the likes.

Here is the link to the screenshot contest thread!

And here is the full list of group stage images!

Without further ado, I present, the screenshot contest finalists!

The image with the highest number of votes from the poll, with 58, is @RoomOfTheEvil 's Journey to the West! Congrats! Amazing use of color, excellent composition, and a great theme of a wandering monk and his animal companions. The red earth on the mountain reflects sunlight in a delightful way. The sparse use of embellishment combined with the shadows of the cherry trees really give this image a lot of depth and symmetry. This image also really shows that you don’t necessarily need to master skyboxes in the scenario editor to make a great scene. 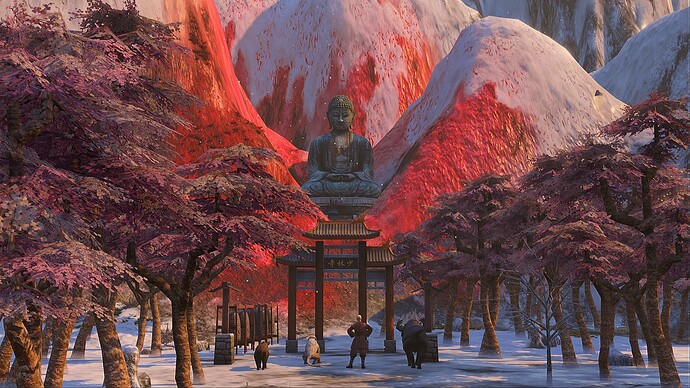 The second place finalist is @hamletlopez 's stunning and striking image, La Noche Triste, with 38 votes. Referring to the night when the Spanish fought a bloody, multi-hour retreat from Tenochtitlan, this image really captures the desperation of hand-to-hand combat in the streets of the Aztec capital. Special credit is due for excellent use of unit animations to simulate a scene in full action. The shadows in this image are expertly used-- they accentuate the way that the Aztec temple appears to loom above the combatants. Well done!! 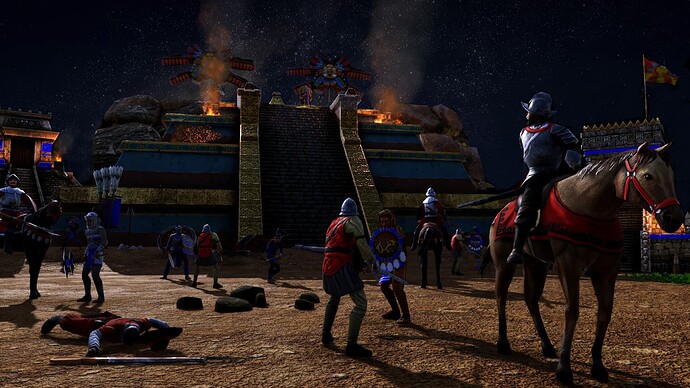 The third place finalist of the contest was @Troteck’s image, City In The Throes of Fire, with 33 votes. This is another fantastic composition that uses night-time lighting, shadows, and fire to create a dramatic scene. A band of raiders storm a village, and strelets are pictured preparing to make the final charge, while explosions from powder kegs go off in the distance. A great detail here are the villagers in the mid-ground to the left, running in terror from the cossacks who appear wreathed in smoke. Another excellent example of an image that doesn’t use a skybox! 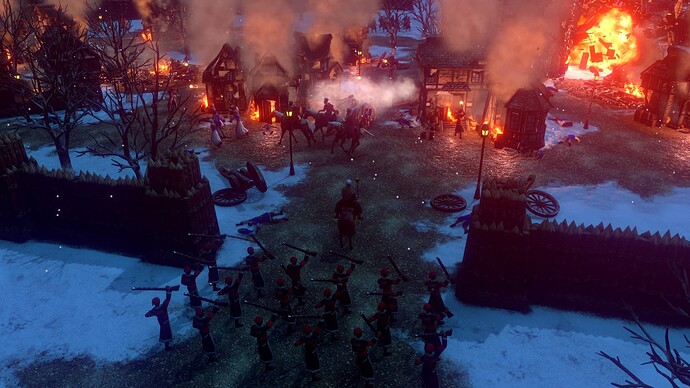 The fourth place image is @RoomOfTheEvil 's creation, Don Quixote Against the Giants, with 30 votes. This image takes full advantage of the new “field” type farms to create rows of corn and millet. Don Quixote charges the windmills, with his squire Sancho Panza in the rear. The image makes excellent use of skyboxes to create the feeling of a vast pastoral Spanish landscape. The only thing I would say could be improved would be to bring the knight and his squire out of the shadow a bit. Congrats @RoomOfTheEvil, you only get a slight criticism on this one, for having two images make the finals! 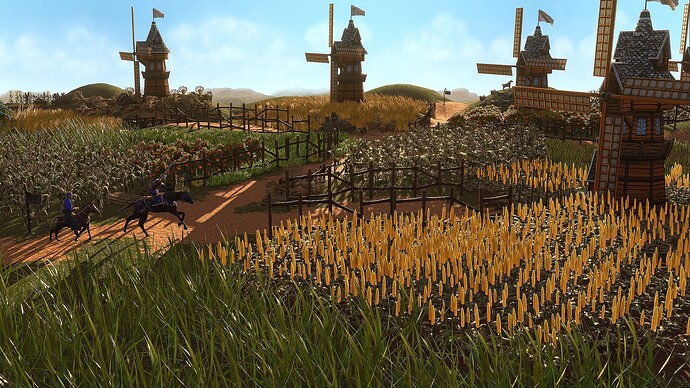 Thank you and Thanks to everyone who voted for my shots

My view on pc is different from viewing it on mobile. They weren’t that in the shadow in my pc and still if i view it form there, the contrast is ok. (Another example of this is the port city). But looking it in a mobile device, i agree they are in the shadow…
The idea in this was to make him charge to the long shadows of the mill, created by the world lightning that gives the illusion that they are really Giants. .

awesome, thanks! this is high res enough for a desktop background. i’m just going to edit my posts with these images.

Thank you, guys. I had so much fun participating The Screen Shot Contest.

Thank you very much I enjoyed sharing his images and I hope to have pleased the players.
I saw that Aussie_Drongo used my image as a thumbnail.

Anyone else feel like hosting the next contest? I’d love to see another one this month but it’s a decent amount of work to make the threads and polls

Some good rules that I should have posted in the last one, which will help for the future:

No memes? One of my submission was almost going to be a meme… I am waiting for the update really which should improve performance. My last submission that I was supposed to post in the first day of september is on hold (lack of time also…). lol.

@Troteck
I saw that, he actually used two, and honestly he should link your profile from the youtube channel… like many don’t know who is Troteck in a random aoe3 video.

Yeah so that a publication, you have to create the best per person, do you choose a theme?

And yeah I agree it could have been nice for people to play my cards, to show my maps, I expect a lot of feedback, if people like, bug report or possible improvement.@RoomOfTheEvil

Awesome!
First of all Thanks to @squamiger8043 for this amazing ScreenShot contest!
We truly enjoyed it!

Hi @RoomOfTheEvil Congrats!
Also @hamletlopez and @Troteck you all made some stunning screenshots and lot of my friends were inspired! Thank you.