Units seem out of place (graphical and animation discussion)

NOTE: Please, don’t bash me because “graphics don’t matter and gameplay is above all”. I know this, I’m not here to discuss gameplay. Also I’m not here in a complaining manner.
I’m rather giving some feedback for the devs, and to see what you do you think of it or maybe it’s just me.

So, if you’re out of the loop, we’ve had a great Age fan preview event where tons of new info, images and gameplay videos were revealed. If you missed it or want to watch again here’s a recap with all the videos:

Now, what I want to discuss with you is particularly the Units art-style of the game.

There is a thread already discussing the art style of the game. But I want to point out specifically to Units and its animations.

In my opinion, they seem out of place. When you take look at the enviroment and buildings art-style, the game just looks gorgeous. It strikes a perfect balance of stylized and realistic graphics, here are couple examples: 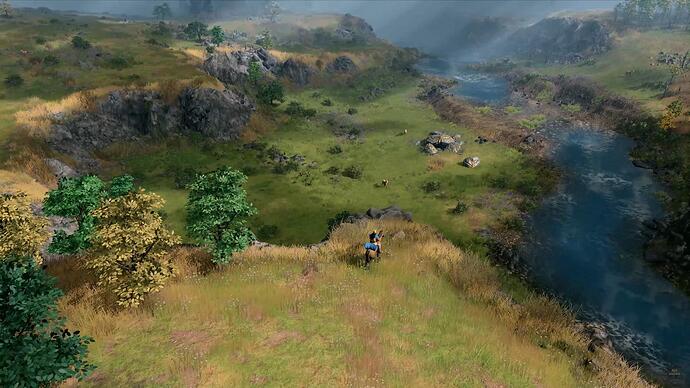 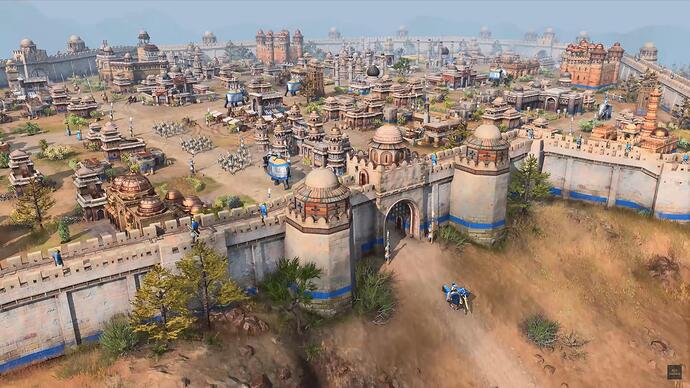 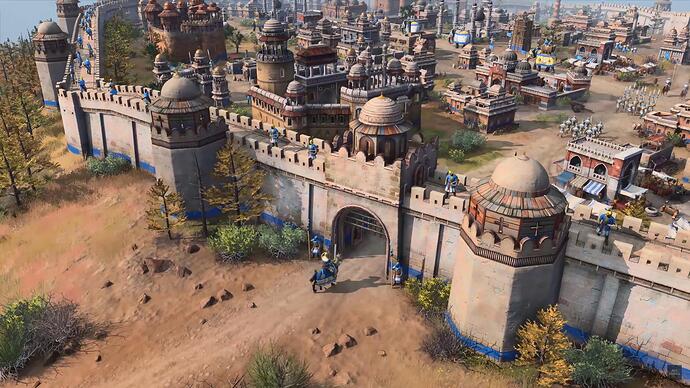 Even water and boats look awesome:

But then there’s the units, that are way too stylized and clash with the enviroment so hard that they end up becoming like they’re from an entire different game, like they were meant for a mobile type of game.

When I first saw them in the old X019 trailer, and then the screenshots, I though they looked cartoonish because I was looking at stills, and that when they were in motion they’d look a ton better.
Unfortunately, they don’t.

And animations don’t help at all. When they battled they looked really rough animation wise. Not to mention the weird arrows and bowmen.

Also, I know readability is a major factor, and key in RTS games. But I still think we can get good readability with the units, without making them so much cartoonish.

60 Likes
It seems that all units have no timing of turns in this game
Animations don't seem reflect the action unit is doing
DOW3 lessons NOT LEARNT: Noisy, Ugly and unrealistic animations
The animations need some work
TedioO3216 April 10, 2021, 5:45pm #2

For me its the units that are like they are made of plastic, its not that bad, but it seems a little bit less of color and saturation will help, and please, the arrows… change it.

I hear what you’re saying, but personally, I don’t agree. I think the units look fine, I’m not too bothered about them. I agree that the environment/building art style is gorgeous though. I’m sure there’ll be a reason why they’ve done it like this.

There are some really good mobile games, but I wouldn’t compare the units to a mobile game. I do see your point about them not being as realistic as the environment though.

Basically, I want to wait to hear more about the process and to play it myself.

I don’t know, I just feel like a lot of work was put into it that I don’t think they would have flubbed on this. Am I even making sense?

I agree with you 100% and this should be noticed by the developers even though I think we are way past changing designing options made to this game.

Agree with the title

I agree, but also understand that they want to make the gameplay accessible and visually intuitive, which with ultra-realistic units would be a bit hard for newbies. Maybe their approach with units visuals and animations is excessive, but maybe tweaking visual options can do the trick… 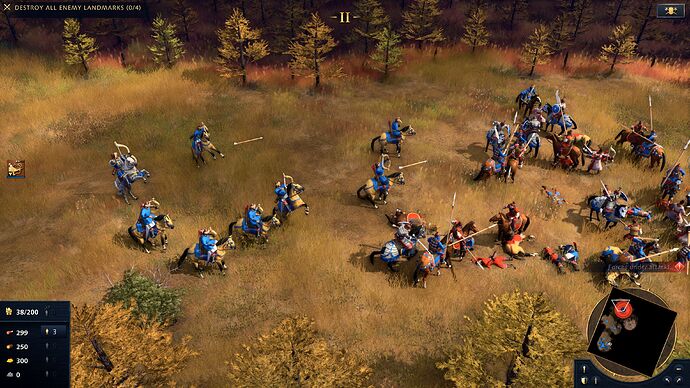 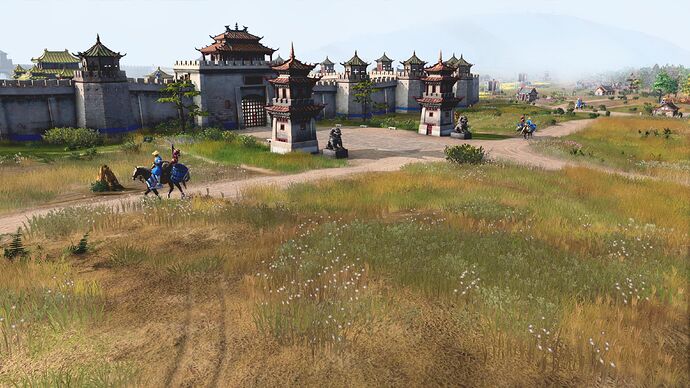 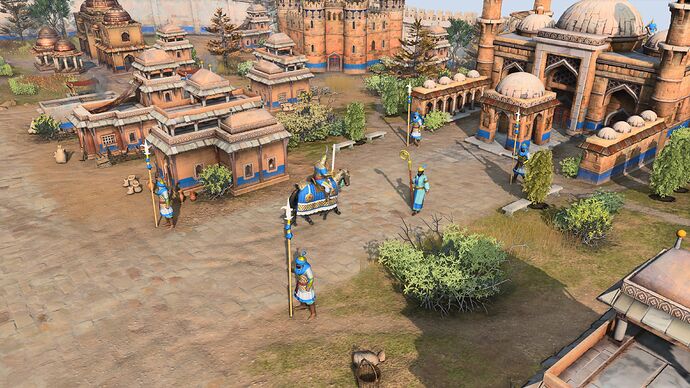 There are not detailes on units. This Is the main problem. AOE3de Is more realistic.

Let be honest people, this game looks generic… I mean look at dawn of war and company of heroes… Look at age 3 or age of mythology… This game has a generic gameplay good 20 years ago, look at the cartoon graphics, common remove you nostalgia glasses and see the reality this same thing happened with dow3… This game was made to appeal to large audiences this is the first mistake the second one are the graphics

Not sure how to order my thoughts on it sooooo splurging it all out in numbered form !!

I think the problem is team color. It needs to be less on units. Devs did it for readability but if they can lower to some part of clothes instead of nearly full body color, it will be much better.

I agree. Aoe2 units look more realistic because it has an more subtle use of team colors on its units. For example: Man-at-arms are mostly brown and grey with a few team color additions of on their arms, legs and shields.

Seriously WHAT are those totally fake looking fire explosions all over the battlefield?

They completely put you off and cover big parts of the battlefield. It feels really dumb looking at your soldiers getting exploded with fires covering them and in the next exact moment they just disappear and they continue fighting as if nothing happened.
WTH is that? 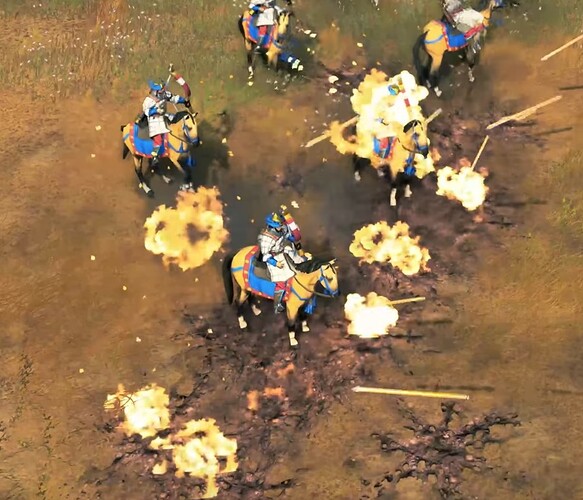 Who likes those things? They did the same with DOW3 with hundreds of visual effects, lightings, explosions and people hated them and hated them and they hate all those fake looking boom boom randomly happening here and there and disappearing before you blink your eye. They dont add ANYTHING to the game. You want to add chinese fireworks? Find a better way to do it!

The fighting must feel CLEAN and SMOOTH, you have to feel some realistic PHYSICS happening in front of you, that is satisfying, not fake fires coming and go without any actual impact on the soldiers behavior. They just keep fighting as if the fires do not exist and never existed. 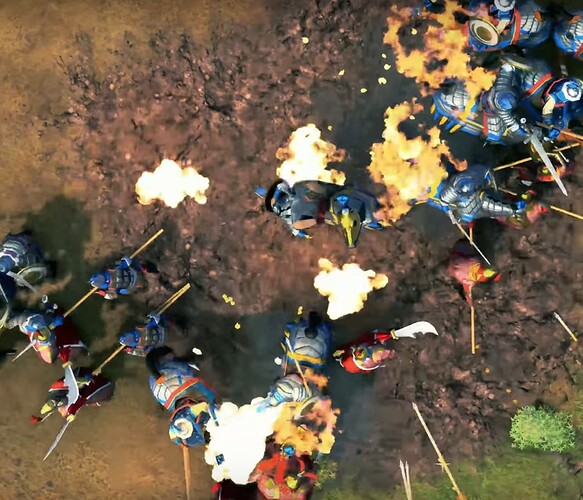 And the Arrows… Seriously? Are those supposed to be actual medieval arrows? And their biggest problem is NOT even their SIZE. It is their freaking SPEED. It’s like someone has put them in fast forward.
Its like they’re coming from a different game, they do not match the pace of the archers or the rest of the battlefield AT ALL.
Look at that

And then they just stick on the soldiers or the ground in a really stupid way. Where is the immersion in that? It looks more like parody.

They look more like machine guns throwing arrows than actual humans. Who th decided to put them in such a speed? Look at the bows they’re exactly like a freaking machine gun.

no comment here. Just look at how the arrows land and stick on the ground. Is this the actual pace of the gameplay or did they just shoot themselves on the foot with a really badly produced trailer where they show things in fast forward???

lol. A horseman with like a hundred of arrows stuck on him, fighting casually. 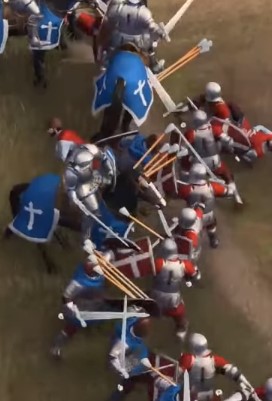 More unatural arrows being stuck somewhere, more like stuck in the air rather than in the actual building. So little detail, so undetailed…

Yes, it sounds harsh but you have to ring the bells when there’s still time.

I agree for a large part with you that animations can and should be be improved however why should a soldier not be able to fight when hit by fire or having 5 arrows stuck in him? I actually think those effects are cool and if you feel that’s unrealistic then it would mean that units have to die after being hit by one archer shot, which we don’t want gameplay wise.

If they had not learnt any lessons from DOW3 every AOE4 map would be three lanes and Joan of Arc would be a hero unit decimating armies and charging her ultimate ready for a big push on the mid lane.

@Druidsbrook They learned some of them (probably). In that case they also had Worlds Edge directing them and ensuring that game would at least look in some way like Age of Empires so we can’t exactly know what they’ve learned. If you look some dow3 videos you will see the noisy animations and effects that I am talking about.

@MrPREKrasny get some help, you edit your posts a thousand times, you delete some, you repost others, there’s complete confusion in your head. What do you expect me to answer you now? You started calling names and give attitude and you got equal back. Then you wondered why they want to censor you. Now that you got told off and realized yourself you want a normal discussion. And no, you don’t call things by their ‘proper name’ you call them by what ‘you’ perceive as ‘proper’, you still seem unable to understand that. Hopefully you’ll learn from it and next time you’ll behave.

About your ‘thesis’, since you like things by their own name, its a joke. You generalize your own experiences with the ‘community’ as something that me, us and everyone wants. I like innovations and want the genre to move forward but as you’re oligophrenic, that didn’t even cross your mind and it has absolutely nothing to do with the low quality textures, the noisy animations and the arrows being very untasteful so your thesis is also off topic.

More on topic: Those arrows are in desperate need of fixing. And as I have seen there are MULTIPLE topics about them. But their speed is not emphasized enough imo.

Like it or not, video games are played on-screen, they are not board games, so visual fidelity is something extremely important to attract people, besides gameplay.