Just to say that I’ve updated the statistics on ageofstatistics.com

Hey all, Wanted to create a new thread so that I could edit the OP to provide updates / change log about my stats site. As always: the site can be found here the source code can be found here If you have any questions / comments / feedback please let me know ! Change log: 2021/11/10: Updated data cut to 2021-10-12 - 2021-11-08 Added new plot of map play rates normalised by map availability (credit to u/Exa_Cognition ) Removed “Aftermath” from the “open map” class Fixed bug that was i… 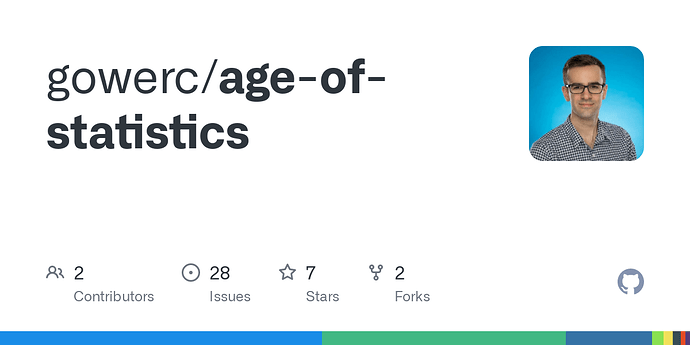 Contribute to gowerc/age-of-statistics development by creating an account on GitHub.

Things that stand out to me on this update: 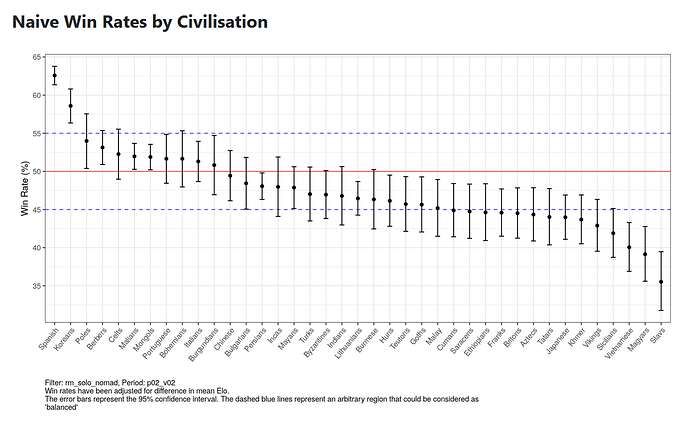 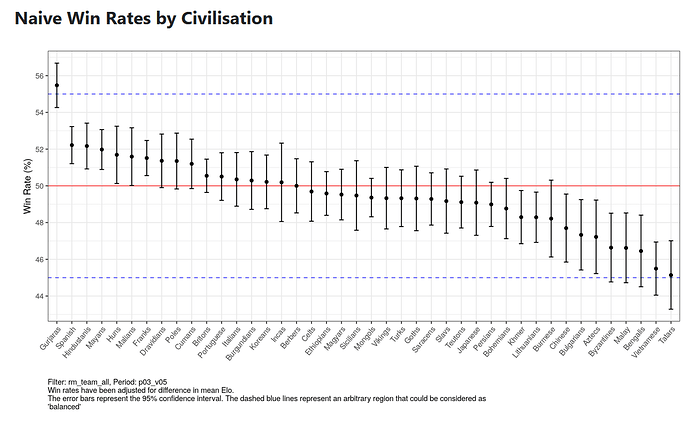 I do but I have excluded it because the data right after a major change tends to be super noisy with people trying pure random stuff. so yer i remove the first few days to help it stabalise and produce more reliable estimates.

Edit: in this case I’ve extended it to a couple of weeks because it was 3 whole new civs not just balance tweaks so assumed it would take longer to stabalise.

Edit again: in general I do a fair bit of preprocessing/ filtering to try and get better estimates of the true win rates, for example I exclude games that finish before 6 minutes because I assume this is where people have just dropped for getting a map they didn’t want.

I am not sure how much we can trust data here, unless you genuinely believe Aztecs vs Spanish is exactly 50/50.

Looks like a lot of randomess and “bad data”, full of bias, smurf accounts etc. In no way should good data show Spanish being evenly matched vs Aztecs (for example).

Which period / filter / output are you referring to ?

Okay. Sounds reasonable.
As always, thanks for your great work. 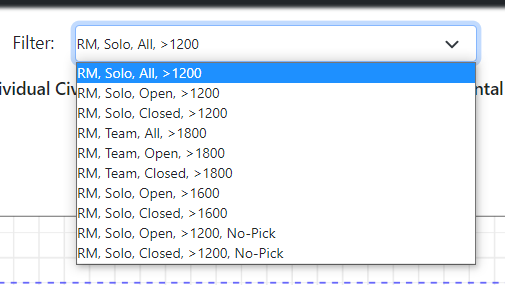 How do you get to see map specific stats?

Unfortunately I don’t support map specific stats on my site. My reason for not doing that is most maps have such a small sample size that the win rate is borderline meaningless. I thus group maps into classifications where I assume the playstyle and win rate should be similar (with the obvious exception of “all”) in order to try and get a sample size where the results have meaning and value.

As a very rough guide in my experience so far the stats start to become meaningful at around 10k matches. If there are any maps or combination of maps that you are interested in and have at least 10k matches please let me know and I can look to add it in for you (you can see number of games per map in the descriptives under the “all” groups)

Edit: also to add that the models + confidence intervals that I calculate for this site take a lot of computational time so I try to limit the number of combinations I create to what I think is the most impactful / informative

Funny how Gurjaras domain TGs so much harder than Hindustani.

Yer I’m confused by this, I would have thought Hindustani’s with both eagles and camels would have been a more versatile civ in team games. Any ideas why this is the case ?

Understandable, but then where did your screenshot come from that showed Spanish being powerful on Nomad specifically?

O if you go to the middle period there’s a filter for it on there, it’s only there at the moment because it’s the only period with just about enough data (there’s also one for teams) sorry for the confusion

The Shrivamsha rider is prob better in TGs than expected

Or maybe its the elephant ram. The civ has a lot goibg on so it can be many stuff

It’s probably more their eco bonus paired with the camels + ele rams.
I don’t think that shrivamshas are so good in TGs cause they have to fight knights all the time.

I thought the same but maybe the speed and camel support is good enough to overcome that. The shriv is also better vs archers in TGs I imaginr since you are normally more focused on macro

yeah intersting I maybe will watch some TG records to see what it is.
But I think it’s mostly the camels, they just replaced former indians in that regard.
I think you can only justify shriv when you are ahead already but ofc it’s a clever play then to just don’t allow the opponent to have a comeback.

I am not.
In normal people games Spanish pocket has everything you could ask for team games: paladins, siege rams, cannons, bbt, super strong UU that can win the game with a successful castle drop, strong navy, good trush potential and one of the strongest (if not the strongest) team bonus with +25% gold from trade. I’ve seen plenty of 2500+ elo team games ended by a spanish castle drop on Arena or Nomad, and as you can see on coolios’ site, Arena and Nomad are far more played in team games than in 1v1. Together are 35% of the maps played, in 1v1 they don’t come close to 10%. When you add Hideout, Lombardia, BF and maybe even Megarandom you are close to 50% of maps where Spanish pocket is really strong.

But I think it’s mostly the camels, they just replaced former indians in that regard.

It’s quite obvious from the Gurjaras team games that I’ve spectated.
Team games are xbows+knights fest, and Gurjaras have all their strength in the stable so they don’t need to tech into multiple units to deal with that composition.
Let’s say enemy pocket has 20 knights, you train 15 camels and 5 shrivamsha for the same food and much less gold. The 15 camels absolutely wreck the knights, your 5 shrivamsha can run past the knights and target the archers. Now if the archers target your camels the shrivamshas can decimate them , if they switch to the shrivamshas your camels are free to murder the knights with the help of your flank’s xbows. Either way enemy pocket is wrecked and you can easily 2v1 enemy flank.
Gurjaras Camels are insanely strong if you know for sure that you’ll face knights. No pocket in team games would make crossbows, unless he/she went random and got a meso civ or something like Vikings/Dravidians/Bengalis.
It’s not that Gurjaras are unbeatable per se, but if you are forced to go knights against them, you’re effectively playing against their strongest aspect, but that’s a team games’ meta problem mostly.

Honestly for ladder tgs these things are kinda impossible to judge. Their camels get shredded by xbows so if people coordinate properly I don’t think gurjaras are too great mid game on regular maps. But if it’s separate 1v1s gurjaras will perform great obviously.

However on very open maps they can be insane in feudal age because of scout production (especially when get some additional sheep from your team mates).