Sorry for making another thread so soon after I made the last one but I’ve made some significant changes to ageofstatistics.com that I was excited to share. In particular the change log for this update is:

Thanks a lot for your works. Feels better honestly. Removing those repetitive civ picking really giving us more accurate picture.

I would like to see more frequent updates, best after each map rotation.

This would be really cool

I would like to see more frequent updates, best after each map rotation.

Re: normalised individual win rates, what would you be hoping to get from this? As sorry I’m just not sure exactly the utility of this statistic would be. It may also be quite difficult for me to create as it’s hard to take into account the variability of both the overall win rate and the individual win rates.

The utility would be to see a “revised” matchup graph to see which civs are countered by other civs or vice versa. Cause currently this comparison is disturbed by the fact that some civs are just stronger than others. You often just see the same civs in the left and right side of that civ matchup graph cause there are just better and worse civs and the better are most of the time on the right side and the worse on the left side.
This proposed graph would also make it more easy to detect strengths or weaknesses of the civs like if a civ is weak to archery like burmese we would expect all the archer civs on the right and the many cav civs on the left side of the graph.

Or with gurjaras we could see if they are really anti-cav if all the cav civs are on the left side. 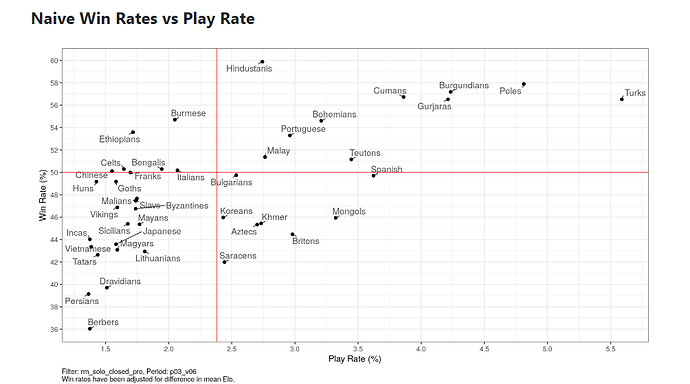 I wonder when than happened
Maybe after the Blast Furnace removal

I never saw Lith as good arena civ… Who made that claim?

Well, the whole monk thing, decent eco, and good UU means it would make sense for them to be good on Arena. They can get monks out sooner, so they can either grab relics sooner, outnumber the enemy in monk count, or both, and then if they get the relics, the Leitis/knight becomes really good.

Heavy cav is basically useless in arena 11
They don’t have good siege, their monks are viable but not superstronk.
Their Halbs actually miss 1 melee armor which makes them more vulnerable to other pikes.
And they have no bonus to their boom.

No, I don’t see lith as a good arena civ, really.
Yes they have a good early monk play, but that doesn’t matter as much if they just get outboomed and destroyed by the other top arena civs.

Pros back in 2020. I remember Hera and Viper’s tier list where he put them on top 5

Not really true for Lithuanians.

destroyed by the other top arena civs

Funny how many of the new civs are good on arena actually 11. But even more funny that neither dravidians nor bengalis do so well 11

Viper had them as one of his top 5 on arena

Arena is like the only map where Leiciai is insane.

They don’t have good siege, their monks are viable but not superstronk.

Having Bombard Cannon helps vs siege, and they have monks sooner than others.

And they have no bonus to their boom.

But the +150f makes them ahead for fast castle.

Arena is like the only map where Leiciai is insane.

disagree, and disagree heavily
since leitis lost the 2 base armor they are top in fighting other cav with both civs having halb support, but not when fighting with ranged. And as basically nobody plays heavy cav in arena it’s somewhat useless there.

But the +150f makes them ahead for fast castle.

I think there are other civs that are faster like mongols.

Having Bombard Cannon helps vs siege,

But no Siege engineers which is huge on arena

and they have monks sooner than others.

Agree, that’s probably their biggest advantage on arena, they get the monks out faster. And their spears move faster too, which is also nice.

since leitis lost the 2 base armor they are top in fighting other cav with both civs having halb support, but not when fighting with ranged. And as basically nobody plays heavy cav in arena it’s somewhat useless there.

Not when you have 10 PA 10% faster Elite Skirmishers and Winged Hussar. and with 2 relics arbalests die in two hits.

I think there are other civs that are faster like mongols.

And Mongols tech tree is worse.

But no Siege engineers which is huge on arena

Siege Engineers is needed but you don’t need it to destroy other siege.

Indeed nice, but probably kinda expensive pickup and you need to crack open for your raids which is hard if you have kinda weak siege

And Mongols tech tree is worse.

There I agree with. But mongols have also a very strong early relic play. With 5 relics also mongols can hold on arena.
also we have
malay
italians
Gurjaras
Khmer
Aztecs
(Dravidians)
Which all should have better or equal FC timings as lith. Some other civs potentially also could just idle their TC a bit to get up at the same time cause they know the only “window” for lith is that FC timing.

Siege Engineers is needed but you don’t need it to destroy other siege.

The 1 more range is really strong, especially on arena.

I never saw Lith as good arena civ… Who made that claim?

Lithuanians used to be seen as top arena civ some time ago (although I’d agree they never really were) but even after the atk nerf it’s still a good civ. Really good monks, good castle age opening opening to contest relics, arguably the best skirms in the game, access to gunpowder, strong UU.

For a lot of civs that’s true but sometimes heavy cav does make sense and van overwhelm the enemy. Leitis is insanely strong btw and a well timed atk with leitis and skirms can be very tough to stop. Oftentimes people go halb siege as imp opening and if you get to the right leitis number you can kill that in one strike. Even if it’s bad vs archers one of the best heavy cav units for arena.

their monks are viable but not superstronk.

Having the faster uptime and faster monasteries makes for a deadly monk rush or just some monks and boom behind play. In early castle age they are one of the best monk civs bc of that.

Since we don’t have balance change for a long time, is there enough sample size to make a 2000+ elo for 1v1? Maybe only for open maps?